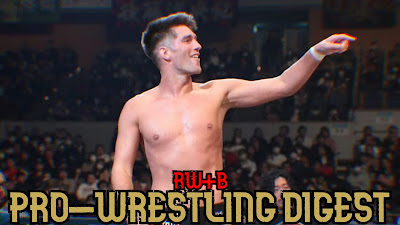 Hey, welcome to the latest edition of the Pro-Wrestling Digest. I had made a choice to switch things up, decided it was a mistake, and am returning things back to normal. HERE is my pull list that I'll be selecting content from and remember that I've posted free, legal links to matches as available at the bottom of this article.

I have to quickly mention the Banks and Naomi news along with MJF's ongoing contract situation by simply saying that I am on their side. Banks and Naomi are hopefully about to be major pains in the ass for Vince until he lets them go and they become bigger fucking stars than ever. MJF also deserves a pay increase.

Wrestling needs a union or two!

Before we get started, here are a few things I've watched/reviewed in full since my last digest post:

So, I started this set with a disjointed but enjoyable six-man spotfest. With a few tweaks it would have hit recommendation levels, but it was entertaining either way.

Bullet Club and Honor No More brawled in post.

Moving along, a rematch from Rebellion as Alexander defended his newly won prize against the dude he won it from. It was a quality heavyweight battle and reminded me a lot of the days of Lashley as TNA Champion. I'm honestly very excited to see Josh's reign playout and I think this was a great start.

Next, we have Maclin and Ishii. I again must mention that Maclin has grown a lot as a worker. Borderline great western-puroresu content with one of the world's best having an enjoyable TV contest. If you've never seen Maclin's work of late, this would serve as a good entry point.

Note that Jay and Mark Briscoe appeared in IMPACT! during the set and I am excited by the news that has followed. They instantly elevate the division!

I'll be watching Under Siege ASAP, by the way.

We're going to head to GLEAT for a pull now and we have some championship tournament action to catch.

#STRONGHEARTS' El Lindaman and T-Hawk started us off with the first semi-final. I would've liked a few tweaks here and there, but they largely delivered on my expectations. I was surprised by the outcome, but not disappointed.

Next, Ito and Tamura's side of the semis overdelivered and was sincerely fantastic work. I've seen little of either but left wanting more from both. That's about the most you can ask for in such a situation.

The tournament final and title decision match was almost MOTYC levels. El Lindaman was the right choice and worked his ass off, as did Ito. This elevated the brand and started the new title legacy on a high note.

Folks, GLEAT is worth the time!

We'll be sticking around in Japan for another title match and Kamitani is defending against Natsupoi.

This one was, in fact, a MOTYC and it had absolutely no right being one. Natsupoi and Saya worked hard, giving us a nonstop thrill ride full of big spots and drama and I was on the edge of my seat, sincerely, as they built this up. Make time to watch this one ASAP!

First, Niebla Roja Jr and Titan in a fantastic spotfest with a hot crowd. They worked hard, pushing forward at a nice pace and the action delivered big on the expectations and in fact overdelivered.

Next, Titan bested Templario in a balls to the wall sprint before facing Mistico in the Universal tournament final. I found myself agreeing with the fans in wanting to see Titan walk out on top in the end, especially from a storytelling position, but it went hard and was great regardless.

The last CMLL match I checked out saw Averno and UG in singles action with the former attacking early during the entrance. Like the Niebla/Titan match, this overdelivered and was fucking awesome! One of my favorites from the country this year.

CMLL can be really fun TV on occasion but, like WWE, largely makes you want to sleep. At least those two rocked.

Note that Soberano seemingly broke his foot last night, the 17th, in the main event just a few minutes in and I am personally wishing him a speedy recovery.

To AAA, we started with Vikingo and Flamita's spotfest which was every bit of crazy as I had hoped for with both working a breakneck speed while delivering big spot after big spot. Well worthwhile and generally fantastic stuff.

My last lucha pull for the set was recommended to me directly. I have enjoyed the chaotic violence of IWRG many times before while also hating their wild west style at times, too. This one was honestly a pretty good six-man, but the DQ finish sucked all of the air out of the room that they had been building up. I cannot recommend this one to others, sadly.

I closed with a series of New Japan matches.

CIMA and Okada is, in many ways, a dream match of mine. The latter is ten years younger and is sincerely one of the best workers of all time with a catalog to back it up. The former is a big part of the reason wrestling is what it is today. I had very high expectations, though admittedly they didn't lean into this one as much as I had hoped they would. To be clear, it was a great match but one that could've been amazing.

Maybe we can get a rematch one day.

Next, two of the most consistent workers and two of my favorite ever against each other. I need a rematch of this one ASAP for a very different reason, as this outing delivered big! SHINGO was the right man to win but I am increasingly in favor of more and more matches with Hiromu getting to face heavyweights and such.

Moving along, we had a nearly perfect showcase as Sabre and Ospreay. Both were on their a-game and the selling from Ospreay really helped everything cement into such a strong package. ZSJ looked like a million dollars and Will lost nothing in defeat, and I especially appreciated the way this built up.

Well worth taking time to see this one.

Both of the semi-final matches were enjoyable as well.

SHINGO and Sabre was a MOTYC that served as yet another display of Zack's brilliance. The Dragon displayed a mountain sized amount of fighting spirit once more, but the technical wizard pulled ahead and looked like a million bucks in doing so. This is the best Sabre's been booked by New Japan and I am excited to see it.

On the other side of the bracket, we had Naito pulling ahead of Okada. The finish sucked a bit of the air out of things and ended the build on a thud for me, but the ride there was well done and it was a fantastic package overall at least. Naito winning a match with Okada is always a nice sight, too.

Multiple must-see matches during the tournament that all concluded with yet another MOTYC, as Sabre defeated Naito in an excellent battle. On this night, Sabre was perhaps the most talented roster member of a promotion that features several talents worthy of being called "ace" and I applaud not just his workrate through the tournament, but the booking in general.

The final stop for me on this week's digest saw Sabre getting his shot at the strap.

Zack worked his ass off, like he did in the tournament, and I found myself really wanting to see a title change. Sadly, that wasn't it the cards and oGODa retained, though. The good news is that this was yet another MOTYC and Okada continuing to reign is essentially never actually a bad thing.