This should be a good one, people.

We started off with the cage match featuring Wardlow and Spears with MJF as ref (wearing sweet gear). I appreciate the hell out of this angle, by the way. The presentation here was pretty well done, too, with the entrances providing for a strong visual to kick off the instalment.

Who had the book with this? It was chaotic entertainment that bordered on circus act but remained wildly entertaining regardless. I know some people will hate this, so mileage will vary, but I had a good time and am rating this accordingly. While I cannot say it's recommendation levels based off of the workrate alone, it was fun.

After, Wardlow murdered everyone.

That's one setup for a huge PPV match that was booked perfectly.

The episode needs to focus on selling the show and this is exactly how you do that!

Before heading to commercial, an emotional plea ran and I am very thankful that it did. Something needs to change, people. We need to all unite and fight against the grip that corporations and advocacy groups have on our government.

Back from break and JAS talked shit. The Wizard did his thing.

Adam Page and CM Punk had a face-to-face next, with Tony in the ring to do his thing. In short, Punk and Hangman did their things. To elaborate, this was masterfully done and saw Punk and Page make a big match feel even bigger.

Moving along, we saw clips from the current Jay program before heading into tag team action.

The latest media call is tomorrow, by the way. Want to hear my question?

"Considering the current state of the business and the world, do you have any updates on your personal feelings toward potential union efforts and would you support such a thing within AEW?" 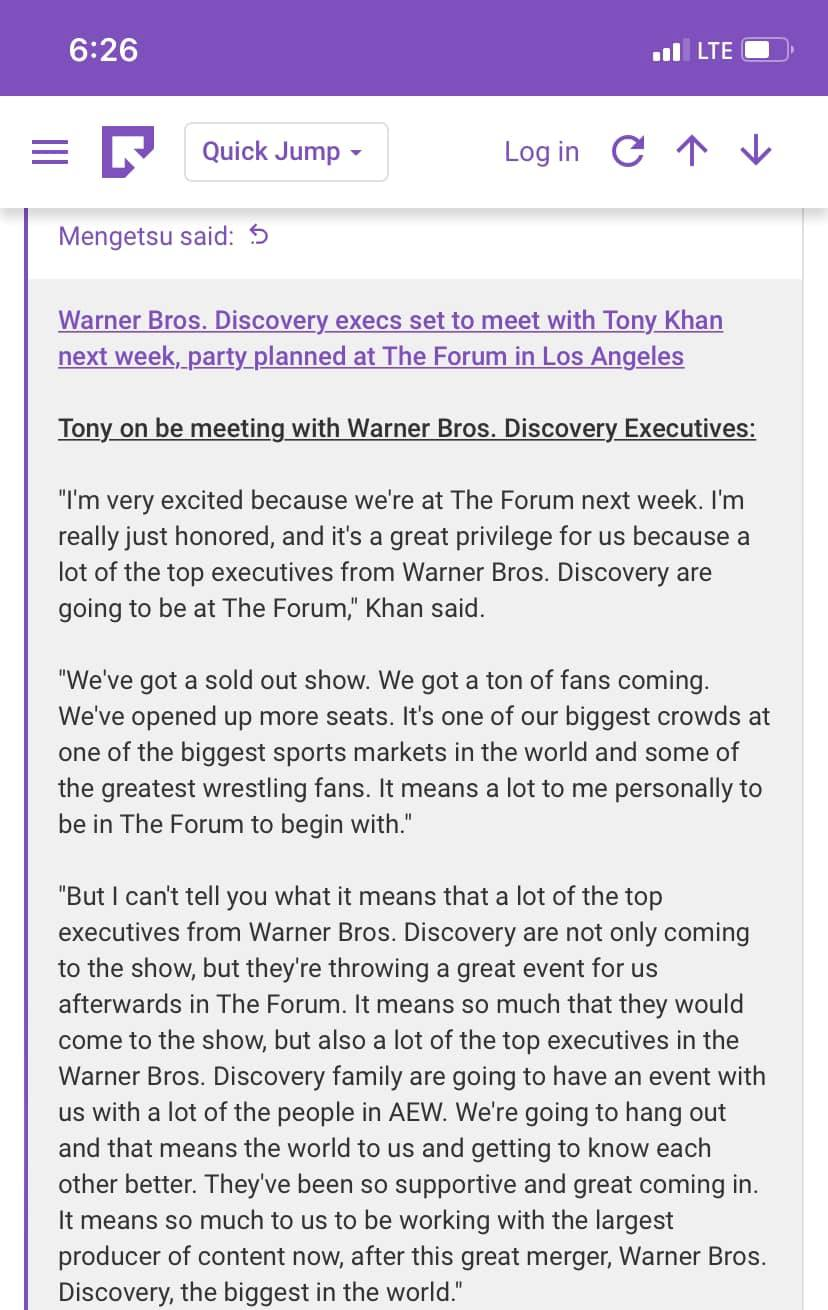 Rather smart to release this ahead of the call, essentially ending any reference to missing upfronts. Most questions are fluffy softballs and that behavior seems to be rewarded. The biggest news I expect to get a mention tomorrow is that TK is interested in running a baseball park soon. Are you a Cubs fan?

Mox and Kingston versus Private Party was good. Picture-in-picture here, for US viewers. The angle hasn't been solid gold, but with Lethal's unit, Deeb's promos, and that shit with Sky, this is far from the weakest thing AEW has going right now.

There's that, at least. Or whatever.

The BCC nWo style-ish shirt looks like it's saying BOO.

A brawl took place after. Bryan's leg was targeted and referenced numerous times.

The good news is that Anarchy in the Arena SHOULD be excellent even if the build hasn't been super well done.

That's three PPV matches so far that have been set up pretty damn well tonight.

A package with Joe calling out Cole ran.

Another tag match followed, this one for gold as FTR put their Ring of Honor Tag Team Championships on the line against Roppongi Vice. This one went PiP, too. I like that they use ROH crew, like Caprice for example, when running ROH related content in AEW.

I wonder if anyone will at least ask about ROH plans tomorrow.

Anyway, this was getting really good before United Empire ran in. A double-team move came off pretty poorly as did Trent's table spot. AEW doesn't do shit like this often and I am thankful for that. At least we got to see Cobb destroy some people, I guess.

If these are the angles (this, Lethal's stuff, etc) and shit that TK has planned to put on an ROH show, I likely won't be tuning in that often.

Matt and Jeff are backstage. Matt's shirt rocked. They built up the Bucks match. This hasn't been booked super well and this was a bit rough around the edges. It'll be fun stuff, still.

Starks/JB/Swerve was a very athletic three-way. They worked smart, hard, and the build-up pacing work was top shelf. In all, I'd call this great.

They should run the other half of this on Rampage, with Hobbs vs Lucha vs Lee.

After, Hobbs ran out, Lucha ran in for a save, then Lee joined. I think we're getting that match. Big man shit, people! Be excited. Keith's dive was fucking sick and he and Strickland's moment here felt well done.

Give them the gold!

Dan and Men of the Year got a backstage promo. Lambert said he ordered a new strap. It'll be a custom and will debut on Rampage.

Here comes Thunder Eastwood. Why aren't they switching to prerecorded, backstage sitdowns for this? TR got a nice response and had a hard time keeping serious as a result, which was a fun sight. The build has been meh, but the match looks very good on paper.

Red and Ruby had a moment in the back.

Another PiP match, this time with Baker and Storm in an Owen match. Hayter ran in for a clunky spot, but the overall quality was there for much of it. The dentist picking up the win in such a shit, overbooked way sucked a bit and dropped the quality down a hair, too.

We ran down the card. It's a pretty damn good card. Tonight has been really good at times and basic at others.

We closed with a very good main event. Borderline great, even. Joe topped Kyle to move to the finals and will face Cole in what should be an excellent finals match.

So yeah, when it was good it was real good. There were decent chunks that simply weren't good, though. I suggest waiting a few days and just catching the videos on AEW's YouTube channel that catch your interest. They did decent in selling the PPV at least and god knows I am excited to see it.