This stream features Ultimo Dragon and Dragon Kid teaming up as Team Toryumon Generation to take on Team Dragon Gate reps KZY and Yosuke <3 Santa Maria.
Posted by Red at 3:32 PM No comments:

This edition features BestBros vs RESET and streams at 8pm EST. Join the live stream and enjoy!

Matches:
1.Captain's Fall: TCS vs Oedo Tai **3/4
2.Queen's Quest vs Team Marvelous ****
3.Donna del Mondo vs STARS ***1/4
Thoughts:
5STAR Special time on We are STARDOM!! which looks to set things up following the big tournament.
We started this edition with a captain's fall six-woman match with TCS going over Oedo Tai thanks to a DQ finish. It was chaotic but not necessarily in a bad way a worked as a decent start to the installment even if well below the recommendation cutoff. The Oedo Tai booking needs strengthened up quick.
Next, Queen's Quest teamed up against Team Marvelous! This specific match was actually one I was very eager to see and they more than delivered. The energy alone made it worth seeing, but the action was tight, brisk, and just simply well done, too. It also set up future matches and featured a surprising outcome so that's truly icing. Watch this one if nothing else!
We close with STARS and DdM going to a draw. The match itself was heavily edited down for the record to less than a 3rd for the record. I'd add that I recently mentioned in another review that time limit related finishes are tricky and hard to do right. Seeing as this was cut down to basically just highlights, it's hard to complain much and the end stretch was truly enjoyable. I rated what I was given and enjoyed it for what it was, and on that not it was fairly good. The drama built up perfectly and there was some nice story work attached. In all, a nice way to end #42.
This episode represents the final episode of the series covering content from September. All that remains for September is my G1 pulls, which I will review as a whole post that looks like it will be about 15 deep. I'll be releasing that as soon as possible but will start posting November content along the way.
Overall Rating: 75/100%
Posted by Red at 7:45 PM No comments: 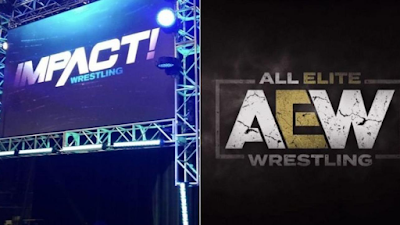 Now that it's official, as had been teased for a decent amount of time now, I think we should go ahead and look at the five biggest/best matches we need to see out of the partnership of AEW and IMPACT. Join me, won't you?

It's already being teased, but a feud between these two teams is required at this point and should make for an amazing series of matches.

Violence. Pure violence. You know you want to see how brutal this would be in 2021 and I am hoping we get that chance.

I wanted to include Mack in this because the dude is just so fucking good. While there are many names that would be fun to see him face off against, such as Darby Allin (we need a rematch between Page and Darby by the way), Kenny is easily the best option for me and the most likely to provide a bitchin' match.

We need this to happen obviously. I mean, this match not happening again would be a travesty. Two of the best and most innovative teams of all time, with history to boot. Not only do I want to see this in 2021, but I am also willing to go ahead and say it WILL happen and it WILL be as good as we are hoping it will be.

The ultimate payoff match, based off of what we have now and a logical booking movement forward, would see Kenny align with Anderson and Gallows, joined by a full heel Bucks duo essentially reuniting the Bullet Club. Likely under a different name unless New Japan comes in. I still think the benefits of a deal with DDT are far more worthwhile for the record but I'll digress from that here. So, have Kenny retain the AAA Mega Championship at TripleMania, the Bucks win the AEW Tag belts, and the Good Brothers holding the IMPACT Tag belts. They run roughshod over the partner brands, perhaps with Kenny even winning the NWA belt and IMPACT belt, too. That's not needed, though. Then on the face side, Cody could forge a hesitant partnership with Aldis, add Swann to the batch from the IMPACT side. Throw in Adam Page for obvious reasons and an extra name (Laredo makes sense as of now) and you have not only a great story but the set up for an amazing match. It also helps keep egos and politics to the side as much as possible.

I am aware of how many dream matches I have left off, which truly showcases how great this move is. Let me know why I am wrong, what you want most, and whatever else you are thinking about in regards to the move either in the comments or on the various attached social media accounts. 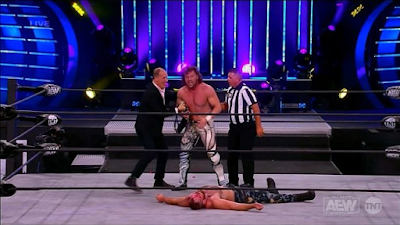 For major title changes, I am planning on making posts going forward. Along with the new Watch Now series of posts, I am hoping it helps liven up the blog in a way that is beneficial to you, the reader.

Last night, for those that missed it, Kenny Omega aligned with Callis and took down the reigning champion, Jon Moxley. Canadian X now holds both the AEW Heavyweight belt as well as the AAA Mega Championship, the latter of which is actually being defended on the upcoming TripleMania show against Laredo Kid.

Hopefully, the end game is a Blood & Guts match in 2021 with Kenny, The Young Bucks, Anderson, and Gallows against an assortment of talent from IMPACT, AEW, and more. I am also hoping they have Kenny go on a rampage and win the top belts in DDT(a match that is already set for the future), NWA, IMPACT, and more.

Remember, while I don't give a fuck about the billionaires involved, I LOVE the extra exposure this creates for the workers. If politics and egos stay away as much as possible, this is great for everyone.

Email ThisBlogThis!Share to TwitterShare to FacebookShare to Pinterest
Labels: Other Sports, Watch Now

Tonight, Sting did exactly what I said weeks ago that he'd do and debuted in AEW. If you missed it happen or just want to see it again, click play above and chime in on the attached social media accounts on you predictions for him in the company.
Posted by Red at 8:20 PM No comments: 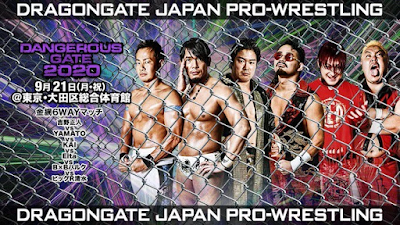 With this post, all that remains in the month of September is an episode of We are STARDOM!! and a roundup of G1 matches. That said, I couldn't pass up seeing this match. These damn cage matches are always a fucking spectacle of the highest level and are truly glorious in their chaos.

If you've never seen one before, think of WarGames but with the entire non-participant roster at ringside, flags hung on top to give the workers a way to escape, and a crap load of over the top action and drama including betrayals, confetti guns, a bag of baseballs, and a no sell table.

It's truly a sight to see.

I won't ruin anything, because I think you really should just go out of your way to see this. This roster remains one of the more creative, athletic, and talented in the world and truly deserve more attention. I sadly think the streaming service attached to the brand is trash, for the record, but find a way to watch and support the talent.

HERE'S the rules if you'd like to read them prior