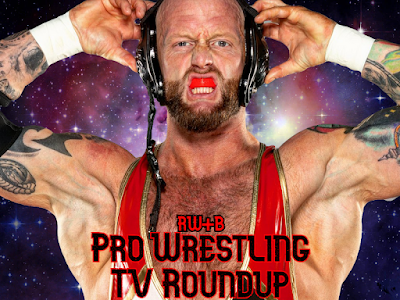 From Ring of Honor Television

READ MY FULL REVIEW OF WE ARE STARDOM!! HERE

The four big units of Ring of Honor all had reps representing in a four-way this week. While I don't feel that they really hit that next level to really make this recommendation levels, it was still fun shit. Brody King pulled out the win to move forward and ahead of the pool.

On Elevation, the non-feuding Dark Order bunch had a fun, crowd pleasing atomico. Silver remains a fucking star that's so awesome, cameras struggle to keep up with the fucker.

The episode had a weird layout, with three quick matches, including a handicap Giant contest, and then a set of promos etc. after instead of having them sprinkled throughout. I considered detailing each promo, but I honestly think that each was worth watching and had a quality that would be spoiled to do so prior to fog of war eyes. Check those out and catch the Dark Order match for something fun, too.

The only thing I'd add is that I really don't care to see Khan on TV. I'd rather him be a background figure instead of cutting cringe raps during iffy af segments. And Uzi getting a pop from fans and then Khan doing the mic work shows me someone needs to have a chat with the bossman.

Dark started with Santana! Her and Diamante had some drama to set up a match for next week's episode, which I'm excited for.

Darius and Starks was far better than I had expected, thanks to the fact that it was allowed time to showcase both men. Both men happen to rock. I love that we're seeing more and more moments like this, with FTR getting in a good one last week, too. The modernized old school shit will bring me back each fucking time. Very good match.

The episode closed with another tag featuring Sydal and Dante, which is a team I'm really enjoying. I wonder when Top Flight will be back, though. This one was good, with the innovative flyers flying and innovating and the base heels basing. The right team won, too.

TV MATCH OF THE WEEK: Syuri vs Utami (STARDOM)