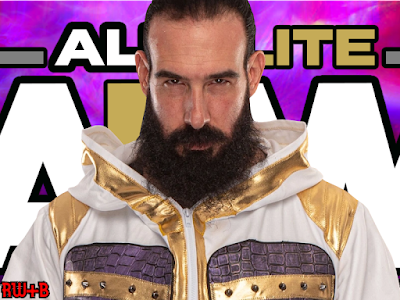 Did you already see THIS (the new charity being started in Brodie name? I love that. Anyway, I considered going to this one since I'm very close to the area but decided against it. I also just got "my" phone back today and was without it for a while, so my intel is a bit lacking and my sanity is worn thin.

I'll rant on that situation at some point, I'm sure. Note that I watched the Devils preseason game instead of this one and am watching it back tonight.

Punk, wearing a Rancid jacket, starts us off and is joining the commentary team. That initial pop is in hopes of keeping eyes. This location was supposed to be utilized last year but shit happens. It's in tribute of Brodie tonight, which is the right move.

Cole versus Jungle Boy is the opener. I watched Cody yesterday morning on Sportsnation telling the crew that Adam has all of the potential to be the biggest signing they've made of late, which is a huge claim. AC has the new BOOM timing down perfectly now, by the way. A reminder, but VKM apparently wanted to change his look, his music, and his name while moving him to SmackDown. That old piece of shit really is out of touch, folks.

Jungle, a dude that's set to be a huge star in the near future, and Adam Cole, were really the right choices to start us off. They worked a nice, chill pace which worked in the situation and it built nicely and featured some decent drama and story work. I could have done without the dick shot leading to the finish, but overall this was still worth seeing. They did so to get some extra heel heat for Cole while protecting JB there, at least.

I really want to see Cavernario against Jungle Boy one day.

Oh, and note that Jungle Kyona has left STARDOM and all signs suggest Kenny has a new toy box addition.

Punk claimed he has an insurance plan to keep him safe tonight. Nice tease.

The Elite's music hit post-match and we cut to commercial.

More N-1 Victory content, a look at Ice Ribbon digests, and today's We are STARDOM!! reviews should be up soon, by the way.

Karl Anderson welcomes us to Super Elite once we return. He puts over the members and the gold and then the group has some fun on the mic. Punk chants ring out. Yes chants later. Omega was interrupted by Bryan a little while after, asking for a rematch while suggesting Kenny lacks balls. Kaz, Christian, and the Jurassic Express ran out in alliance with Dragon and ran the heels off.

Andrade said he was going to have some buds challenge the Lucha Bros for the AAA Tag Team belts. I dropped news that Andrade was having some old buds come in a while back, by the way. I'll get absolutely no credit for it especially because I don't do clickbait here.

Cody and Johnson were out next, but it was the Dante Martin show, even in PIP. His team with Sydal has been pretty fun and a nice placeholder for the flying star while we wait for the reunion of Top Flight. Punk even alluded to a relation in ability to Tiger Mask. I want Vikingo versus Martin, by the way. Cody, with a show set to debut after Dynamite, got a lot of boos tonight. Narratives, people. They've failed here at that. It's not going to change any time soon, seemingly. Everyone did pretty well in their spots and Johnson got the victory over Dante, which should be a big deal for future stories. I don't care for either men's finishers right now, though.

Tony joined Cody, Arn, and Johnson in the ring after. Cody called out Black but Arn told him to shut the fuck up. Drama! His promo made people forget about his fall and had folks talking all day today. Note the location that promo was cut. Interesting choice to say the least. Anyway, the segment ended with Arn telling Cody he wouldn't coach a loser.

Next, the big boys brawled and the littler ones grappled to start. The trios match was short, but pure fun. Post, Sting dropped Greene with a Scorpion Death Drop. What's not to like?

Matt cut a cheap promo, saying Rochester didn't deserve to see his planned debut because only trash comes from Rochester. That's one way to handle a tribute night, I suppose.

Dark Order were supposed to put their drama on the backburner, but started with heat between Uno and V as they teamed with Orange Cassidy and were accompanied to the ring by -1, to take on HFO in a gigantic 16-man clusterfuck. The drama ended when Mrs. Huber, -1, and TayJay came out and shut that shit down. From a match quality standpoint, this wasn't super special, but the other stuff attached made it worth a watch and the endstretch was fun. It was short, either way and the moment after was beautiful.

Lio Rush got a promo spot.

Dan then cut another promo that felt like every promo he's cut so far. The good news is that Sky and Page got some mic time, at least. Sky reminds folks that he grabbed a Sonic ring and then did very little since, and the truth is he easily could have been a main event name if AEW had wanted him to be. It is what it is. AEW is a variety show, as I always say, and I just don't like this ongoing portion. Also, Sky does have a figure for those that care.

Shida versus Deebs is set for next week. YES!

The women's match of the night saw TayJay against Ford and Bunny. I still have numerous nitpicks with how the division is booked and am not alone. They'd benefit greatly by giving more attention here instead of accepting that the bar was already low and accepting a golf clap. The women's tag belts are coming sooner than later and the TBS title should help, hopefully. If Jungle is incoming, that'd be nice, too. This match sadly wasn't anything super great, with a few warts attached, but it was an okay, short tag and the right side won.

-1 celebrates with the girls.

Since they've put all of the ladies in one section tonight, we got some promo work to build up Rampage after.

MJF says there are four pillars. Him, Jungle Boy, Darby Allin, and Sammy Guevara. He's beaten the others and put himself over nicely. He wants to be champion and Tony told him to earn it. Darby came out, the two shared words, and MJF once again was a masterful dick, even teasing a split from AEW. Gold shit.

The show closed with a nice moment. It's a good call, especially considering the circumstances. I appreciated the storytelling in the main event and the contest itself was pretty good, too. Miro was an awesome champ, they protected him a bit here, and he'll still be doing awesome things. Meanwhile, Sammy, a dude from my hometown, is now champ and we have a face holding the belt Brodie held not that long ago. This run should be a fun one as we wait for Cole to take it next.

With Punk and Excalibur on commentary, two recommendation level matches, fun throughout, and nice bits of emotion and tributes for good measure, I'm happy to say that AEW once again gave us two strong hours of pro wrestling entertainment. Check this one out if you have the time and didn't see it live.