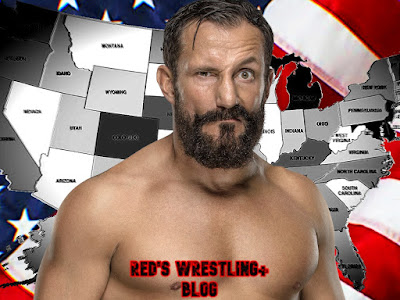 READ MY REVIEW OF DARK HERE

READ MY REVIEW OF DYNAMITE HERE

Goldberg had a moment with Lashley this week on Raw. The WCW dude has never been good on the mic and wasn't here, either. I'd love to say the plan here is to have Lashley's solid reign continue with Goldberg being another W along the way, giving Bobby a decent marquee win at the companies' second biggest gig. Flip a coin. The segment ended with MVP talking shit to Goldberg's kid at ringside. He ate a weak spear as a result. This did nothing for me.

Flair got a mic later on. Decided to reference Biles in a rather tone deaf spot that felt like a meandering Trump speech. The entire thing...yeah, it wasn't her best. She can be rather average on promos. I do wonder if she'd be better given a different setting. The freedom of AEW perhaps? Andrade wants her there, her dad just left by request and wasn't wished well, and her contract is apparently coming to a close soon. From what I understand she hasn't signed anything new. Of course, the AEW Effect, which has allowed several workers to get far better deals than they had, is always at play. I think part of why Vince has been allowing folks to get the axe lately, especially Bray, is to send a message to the roster to cut it out. Essentially, "you want a better contract or you'll go to AEW? Fuck that, take this contract and like it." Some of the cuts, with the "budget issue" being used as an excuse, are likely to pay for dudes like The Rock and Brock, the latter apparently waiting until next year to return. That works but they are still feeding some big names to a competitor that's getting hot, they're allegedly upsetting their network homes with new negotiations on the horizon, and they have loads of folks that wouldn't make as much of an impact should they go that are still signed. I could be very wrong, but it makes sense. On the flip side, we could be forgiven for thinking Vince has no idea what the fuck he's doing and those around him in his inner circle have their noses far too deep in his asshole to point out the issues. I will say, regardless of the situation, there are consequences. Bray, Anderson, Gallows, Braun. They signed new deals and were cut. If someone like, Adam Cole, was to get a strong enough offer from WWE to stay instead of joining his best friends and lover, would he want to?

Kross and Lee worked together again. Since Jeff is out with COVID, Karrion is now stuck in purgatory, simply because this company has no fucking idea what they're doing. Their plot with Hardy stalled out and they are treading water, trading wins between two dudes in a manner that does neither any favors while also undermining the upcoming NXT Championship match between Karrion and Joe. It's tragic but expected. The worst part is this match was just as average as the thought WWE put into it.

The main event was a no holds barred match. They're trying to sell Nikki as an underdog champ, pulling out spunky wins. It was good overall and the strongest she's looked since winning. Arguably this is their best angle right now on Raw. It's okay.

On NXT, Hit Row was starting to heat up on Legado del Fantasma while their leaders worked as seconds. Fantasma forced a DQ when he used a chair shot, beating down Scott after and forcibly taking his grill. Hit Row cleared house shortly after to end the moment. A building block match and nothing more.

Finally, the biggest wrestling company gave me something I enjoyed. Fish and Strong had a very good contest. I appreciated the calculations and strategy here, even if it was basic on the surface. The small things people, the small things. They matter, you know...

Kai got a promo package explaining why she turned on Raquel. It was okay. I'd far prefer to see her holding the belt but it feels a bit like this is just setting up another win for Gonzalez. I like the, "I'm nobodies sidekick" thing.

They also aired...sigh...a terrible segment with Io and Stark at a sushi spot. It was trash television.

Joe beat up a bunch of "security guards" because Kross called him out. That's something that happened. Dude, it's clearly not THAT hard to beat the NXT Champion. Jeff and Lee have proved that much on the flagship. Calm down and drink a beer.

WALTER and Ilja's next NXT UK Championship match, which I am VERY excited for, will air at TakeOver. Speaking of, that show might move to Vegas.

Last thing up that I watched from the show, Gargano and Stalker Boy worked the main event. It's a cheesy romance with violence. I don't care much for it, to be honest. That's fine. The match was good overall I suppose, but nothing special. Lumis is a limited worker. Gargano put in his C game. Meh. Dexter and Indi made out in the ring after despite Gargano winning. Some folks seemed to have loved this so consider checking it out if you've enjoyed the angle more than myself.

IMPACT! has become an interesting show, feeling both a natural progression on the formula they've been embracing for a while now as well as a secondary show to NJPW and AEW. This week's edition felt like a hype builder for Resurgence as well as Emergence while also serving as promotion for AEW angles. It's a strong series on its own and also a companion piece for itself and for others. Props.

Bey did some work for Jay and was then added to Bullet Club, which I am excited to see. Seeing as White is sticking around the states for a bit, maybe he should expand the ranks a bit. It'd be nice seeing a legit branch in IMPACT to reek havoc even when Jay returns overseas.

Bey's match was good shit and it was a cool moment after for sure.

Melina slapped Deonna. I sadly don't care much about this angle but it was a decent segment.

The main event was honestly a great multiman story block. Simply fun stuff and it flowed nicely while feeling like a big tv main event.

On SmackDown, Vega, Banks, and Belair shared a dramatic moment, Edge challenged Seth, and Finn was beat down. Apparently Cena was there but not used for some reason. I didn't watch any of the matches because I didn't care enough to. READ HERE if you're curious why WWE will no longer be covered here.