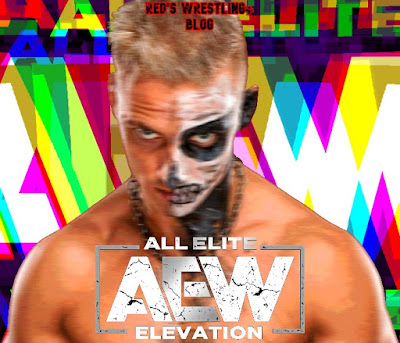 Matches:
1.Red Velvet vs Angelica Risk NR
2.Lee Johnson vs Marcus Kross NR
3.Kris Stratlander vs Ashley D'Amboise NR
4.The Factory vs Hunter Knott, Rosario Grillo NR
5.Yuka Sakazaki vs Dani Jordyn *3/4
6.Darby Allin vs Bear Bronson ***
Thoughts:
I went ahead and watched Elevation this week. I honestly don't think I've watched a full episode of this show before. Bits and pieces, for sure, but a whole one? Yeah, I don't think so. Still, I figured it was worth a watch.
This one ran for 45 minutes, for those that care, which might make it easier for fans to make time for it. I still have an issue with how random the length of these installments are, as I am not huge on inconsistencies and such. It is one of the reasons that I feel the entire Dark and Dark: Elevation concept is smart yet flawed and ill-defined.
It is what it is.
So, we started with Red Velvet squashing a twerking Angelica Risk. Red Velvet hasn't really won me over and Risk did very little to make me care for her.
Up second, Lee Johnson got a victory ahead of his TNT Championship shot. Lee's finisher isn't good enough, but he's a solid worker and did enough here I suppose. Miro came out, cut a promo, and then stared out as if he was trying to hold in his shit.
Kris got a promo package and then a squash of her own. Seems to be positioned to challenge Baker, which could be enjoyable, especially if laid out correctly.
Hey look, another squash followed. The Factory's Comoroto and Solo got the W. Something that could spice up these events would be a championship or cup or something for the up-and-comers. DARK King and Queen, maybe? I don't know, just something.
The first match that really went long enough to review was just an extended squash. Yuka was fun, Dani was green. It wasn't much of anything but it's always nice to see Yuka so I'll take it.
Last up, Darby and BB put in for a good main event. It won't blow you away, but this was serviceable stuff and I found it enjoyable.
In all, D:E#21 was a quick watch. The main event is perhaps something folks would like to see, but I have little reason to recommend others to check this out unless they're friends with one of the greener workers and want to support their efforts. The show works for what it is and will occasionally have something that exceeds the situation, in which case I'll try to talk about it here on the blog.
Skip.
Overall Rating: 55/100%
Red's Reviews Wrestling