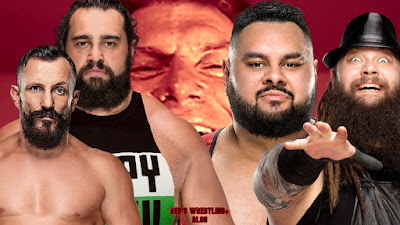 Imagine signing a contract with a company that you've always dreamed of working for. You've made it. As a professional wrestler, you've spent years fine tuning your abilities on the indies, rarely making enough to actually serve you well while constantly needing to explain to naysayers that you can do this and you can make it a career instead of a painful hobby.

Then, after being stuck in catering for an extended period, you're let go. The excuse given? Budget cuts. This from a company reporting record growth and an ability to remain profitable almost in spite of whatever happens from a critical standpoint. You may have had creative frustrations along the way, and that's if you're lucky enough to get picked for any role at all. Maybe you were built up as a star on NXT, a paradox of a brand that increasingly stands for nothing and has no true definition, and then once "promoted" to the main roster you get lost in the shuffle. It doesn't matter, either way.

You can be the antithesis of these scenarios and still get the axe, as proven by the likes of Bray Wyatt, Braun Strowman, Rusev, and more.

So, the rug has been pulled out from under you. The good news is just having worked for WWE will make it easier to get work after, as long as you don't price yourself out like Ryback. Ring of Honor, Impact Wrestling, AEW, New Japan. The future is still bright.

All of your friends will mourn your release on Twitter, you might get a few texts, and then those same folks will grit their teeth, presume they're safe, and move along with their days.

There's an issue here, though. Not just the sincere devilish embracement of capitalism on display, where everyone is just a cog in the broken machine that is slowly crumbling. No, it's also an issue of perception. Do you think that the dream can survive? WWE has long thrived on that dream. The dream of joining their ranks, even if it means minimal usage. But, can that very dream continue to push on after the behaviors of Vince and crew the past few years.

The main excuse given to the recent NXT string of cuts is that they are trying to actually make NXT mean something. Last year, they morphed it into a counter program and it failed. They've moved nights and it's still failing. It doesn't resonate and fells like a heartless version of what other companies are trying at times. So, they are claiming they want to reboot it softly. New lights, younger blood, etc. But the cuts don't make a lot of sense when compared to that excuse, just like the budget cut excuse never fit, either.

Will wrestlers continue to want to make WWE their main destination in reflection of all of this, especially as AEW continues their epic rise, Ring of Honor continues to be a hot home for hard workers, and all of the other spots that can pay them well enough that they can make wrestling a career?

I sincerely hope that the next step in the shit decisions and greedy nature that we've seen is a strike. WWE has shit on their fans increasingly, showing a deep level of disdain far more than most are willing to admit. They have a, "don't like it, fuck you" attitude to basically any critique. I feel this all hopefully means a joint boycott and strike is on the horizon.

Fans, you are given over ten hours weekly of WWE television. If you sincerely love the product, that's fine, but I have seen even the most diehard of fans complain often. Why watch NXT when angles will die as soon as Vince gets an itch? I've seen some say they only still watch because of a nostalgic loyalty. The most common reasoning, actually, is that they love certain workers and just want to see their content, but that they dislike WWE itself. Boycott. WWE might not care as much, at first, but the networks sure as hell will.

I'll start. As of today I will be completing the weekly tv roundup post for completionism reasons, for my own mental sanity, and then I will be imposing a WWE boycott here in the blog. That means I personally will no longer cover anything released featuring the WWE logo. It wont have an effect on me much because I rarely find things there I like anyway, the talent I like apparently could be elsewhere at any time, etc. I ask you to join me. If you want WWE to be better, join me. It won't happen on its own.

Sincerely, ask yourself as a fan if you care more about the workers or an old dude and his logo.

Talents, aren't you tired of seeing your friends drop like flies around you? Is the cognitive dissonance enough to push forward? If you want real change, it's time for a united strike. It'll take strength, but it's worth it.

Sadly, I don't see either of those things happening. The machine will push on until the gas runs out. When will the empty light come on is the only question left.