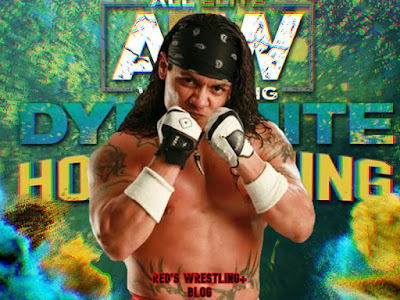 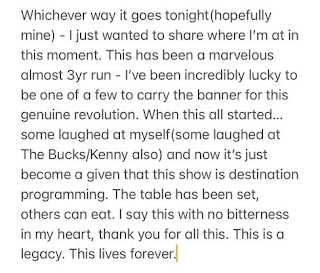 Lee is getting a decent stuff. Scraped away from being squashed down. We're getting PIP again. Yeah, the women's match is getting the full screen treatment.
Apparently some folks online have convinced themselves that Cody is actually leaving the company, not just taking time off for his show and new kid. Qanon level shit. Wanon. There it is. That's what I'm calling shit like that now. Wanon.
Miro is brutalizing this dude. The comeback bit for Lee was well done. The dude is winning over folks big here. Since Scorp is too busy with Ethan these days, I'd love them to get more color in the main event picture. Lee could maybe do that. He's winning me over here. Everyone is on their A game. Hell, surprise me. Have him win here. Instantly elevate the guy. They wont, but still. I'm not the best booker in the world though, so fuck it. When Miro gets that look and does his taunts, imagine him doing that at home, oiled up, in the mirror. This was a pretty good match, folks. Pretty good.
Jericho, Mark Henry, Excalibur, and Taz are the commentary team for Rampage. That's fun.
Tony and Christian will chat backstage after a commercial break. Maybe this saves the eliminator match.
A PBR commercial airs because, what is life anymore...
I believe I am 100% on the night so far versus my predictions post I made earlier. I'd link it, but just hit backspace or the logo in the top left and you'll see it.
Christian sang us a tune. Leyla apparently turned down his help because she has Best Friends. Cage is indeed apparently being set up for a shot against Omega. I've seen a lot of folks complain about that idea and I kind of agree. Oh well, it'd be a fun match I suppose. Better for TV, though.
Leyla came out with the Best Friends as suggested a second ago. This should be fun. Any chance we get Kamille in AEW at some point to promote their NWA match? Yup, she's at ringside. I like that the NWA Women's Championship is basically a secondary belt for the division.
Little Caesar commercial during the PIP. They are MDK confirmed. Look at all of sponsors running away.
Kris and Nyla share a moment at ringside. JR throws shade at Knox. That knee strike was awesome. The nearfall was, too. The entire closing stretch rocked in general. Another enjoyable match. Leyla called out Kamille, who fucking dwarfed Layla. What an amazing visual.
A Jade package runs.
The Satanist by Behemoth would be a great theme for Black. His entrance is awesome. The mask reminds me a big of Hunter. JR seems to have let something slip before, hopefully, the last commercial break.
Eric Mutter just asked if I could believe that WWE fucked up with Black. Yes, yes I can.
The Allegra guy is a bit creepy.
Cody has Dustin as a manager tonight? Tony mentions that QT called off his apology this week. Christian's song earlier cut the segment. That's what we'll go with.
Will Excalibur namedrop PWG?
The table spot was awesome. Black is going to be a fucking star. He destroyed Cody. Fucking destroyed him. What a moment. Tony comes to the ring to interview Rhodes in a send off moment. I admittedly won't be watching that reality show. That's fine. Is he retiring? He calls AEW competition, no longer an alternative. He addresses the in-fighting rumors with the EVPs. Thanks everyone. Fuck, is he leaving?
He puts a boots in the ring. Black slams him with a crutch.
The buzz from this moment will fuel things for the entire week. He'll be back after filming. It'll be a fun moment.
What a fucking episode. AEW is on such a roll. Watch this one for sure. Great television.
Overall Rating: 85/100%
Red's Reviews Wrestling