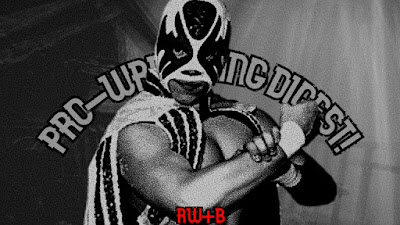 We're starting with the Torneo Increible de Parejas via CMLL.

1. This one was a quick, solid start to the tournament.

2. A touch below the first match, but still fine for what it was.

3. Outside of a rough dive misfire, this was very enjoyable spotfest and perhaps the best match of the tournament.

4. Gran Guerrero and Ultimo's issues were the focal point here, but there were some decent spots along the way.

5. Too short to rate, but fun stuff for sure.

6. Another very fun match, with loads of entertainment in a tight package.

7. The finals were story heavy and had some cheap heel tactics tossed in, but I thought it was another pretty fun match overall with just enough happening to make it worth considering.

These tournaments can be a bit much at times, but I enjoyed this one. Everything was kept nice and short, rarely feeling like it was overstaying the welcome period, there was some decent story work mixed in, and even a few worthwhile matches for good measure. I might be one of the few people, especially in the states, that is enjoying CMLL right now but I think they've had some really entertaining things this year so far.

Now, over to WWE.

8. NXT UK is arguably the best thing WWE is producing right now and Ilja has been fantastic as champ of the brand. Here, he and Frazer put in for one of the best matches Vince's empire has put out this year. It was a fantastic display of fighting spirit and I'd love a rematch ASAP.

9. This one I watched via the YT video that WWE uploaded. It was too short to rate in that form, but was super circus act stuff either way. Knoxville caused a distraction finish and Ricochet won the strap. Meh. I wish I could at least be happy for Prince Puma, but the belt means little and the dude just feels like he's kind of there anyway, if you get what I mean.

I'll be back tomorrow, hopefully with a review of Revolution.

Hey look, I posted my review of Revolution.

10. This was one of WWE's best matches they've aired, on any brand, in a while. Sincerely, fantastic shit. The pacing was well done, that RKO was awesome, and everything was just pure fun. Watch with the audio down and enjoy this spectacular display of sports entertainment style wrestling.

KO called out Stone Cold for a Mania KO Show. They're bringing back Austin.

IMPACT time. One from TV. Two from Sacrifice.

11. Bullet Club's White, Bey, Anderson, and Gallows battled VBD and GOD. It started as an out of control brawl so D'Amore announced it would be turned into a no disqualification match. It was chaotic as hell, with split screens during a chunk to show the backstage brawl while action took place in the ring simultaneously, but it was fun as well. I can't really rate it super high, but it was perfectly acceptable television.

12. They went David vs Goliath here and it rocked. Jake is super underrated and Trey is sincerely a great worker. Great, X-Division content. I'd dig a rematch.

13. Shelley's back in IMPACT, and he kicked off the return with a fantastic match with the BizCliz leader, Jay White. It was better than expected and they certainly earned the crowd response that followed. I'd love to see MCMG vs Bey and White.

Later, after what looked like a rather average main event, Alexander returned. His visa issues are resolved and he's ready for his rematch with Moose! I really hope they allow for a switch and a good run now.

The next few are from Warrior 19.

14. This one was a very fun, slightly clunky, indie style spotfest. Blake Christian also happened to call out Ospreay here.

15. The Acclaimed picked up a cheap finish victory, but not before mocking Cage for his AEW drama and KC for working with dipshit Court. I do wonder what happened with BC considering Tony made it clear in regardless to Cody that he didn't want to hold anyone that didn't want to be there, yet he optioned Cage. Anyway, it was a good match but nothing too special and the finish won't do much for ya, either.

16. You don't see Santana, or Ortiz, work solo that often but they are very competent performers. Here, Santana was aligned with Speedball which provided for a rather fun exhibition.

17. I expected a lot more from this one. Neither were as good here as they actually are typically. Perhaps Bandido is still below 100%. I'm not sure what is up with DM here, though. Why Dante got the nod here was a bit strange too, to be honest. Good, but disappointing.

18. I have no idea why this wasn't a DQ finish, but I am thankful it wasn't. Great tag team action. I wish we'd see more of this version of Drake in AEW.

19. I honestly expected a bit more, but this was still a borderline great main event (with a protected finish). Athena will hopefully be working in a big fed again soon. Time limit draws can be a chore when done poorly, but this was pretty well done even with the wonky heel switch followed by a face style post-match.

Fuck that one fan, by the way. Some decent indie style stuff once again. Warrior is an okay fed for that kind of thing.

20.MLW tends to underdeliver on matches, but I thought this was very good. Not only did it make both look good, but this was arguably one of the best things MLW has put out in a while.

That's it this week. Thanks for joining along.