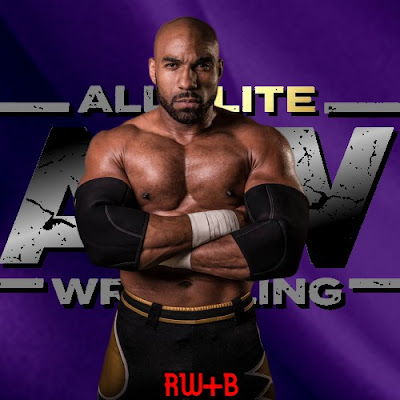 Dynamite this week began with Jericho and Eddie seemingly squashing burgers. Kingston stomping out a "what" chant in seconds was perfect. Of course, this is pro wrestling though, so it didn't end in hugs and kisses. No, instead Lionheart replaced Inner Circle with the Jericho Appreciation Society. Instead of PnP and Sammy, he'll have Garcia and 2point0 by his side. Hager stuck around. The new heel unit beat up Santana, Ortiz, and Eddie.

I'm glad to see Garcia, Matt, and Jeff moving to something that likely will have more meat to it.

Next, we had Page defending the World strap against Dante Martin.

Now, I like Dante a lot. The dude has a bright future for sure. I also wouldn't have minded a one week build to set this up. As it stands, I thought it came off as just a random title shot, though.

I don't watch Dark or Elevation frequently and I get that they are cannon and are utilized by Khan as throwaway challenger builders. Still, looking at Dante's televised content this year, which is what most fans are watching, it came off as rather random.

This year, on Dynamite, he defeated Hobbs. He then lost to Hobbs a month later on Rampage. Last week, his team was finally reformed and they had a good showing but lost a battle royale.

That's it, unless you count his victory.

I didn't notice any mention of his rise up the rankings being mentioned on TV and they just randomly announced this online ahead of this installment.

I mention all of this for a reason. You see, random defenses like these are fine but do little in the grand scheme.

It was just a match that happened.

At least Martin getting that post-match moment could be a nice seed for a future angle.

Their match was good, though far from must-see from an in-ring quality stance alone.

After, Cole says he's not done with Adam. Six-man content is lined up.

Next, we get the WorkHorsemen on Dynamite! They're a pretty damn good team, folks. They didn't get to show it here, though, because they were meant to just job to the new duo of Mox and Danielson.

Bryan and Jon are going to be an awesome team and I am hopeful they start adding dudes to their unit ASAP.

After, Regal cut an emotional, raw promo. It was a bit rough around the edges, but it worked for what it was.

Adam Page chats with Dark Order next. There's some tension there and it appears he might not be picking any of the faction members as his partners.

I appreciated how they announced the next match, saying that it was tacked on because the title match was so short. It felt like a logical, smart way to set this up. The contest was fine, though it sucks seeing Yuta continue to basically be a jobber. PAC picked up a record padder.

Backstage, we get a segment that ended with Cole picking reDRagon as his partners. The Bucks were opposed to the idea. Eventually it looks like we're getting Cole, reDRagon versus Page, Bucks. Omega is due back soon so I wonder how that will tie in.

Next, we had a semi-clunky segment with Private Party taking Andrade's side to toss Matt out of the AHFO. Darby and Sting tried to make the save. It didn't go super well. Next, the worst kept secret in wrestling happened with Jeff Hardy making his debut. Of course, he danced a bit before actually trying to save his brother. It ended with a Hardy reunion moment and Darby looking like he just creamed himself.

Nese and Strickland is set up for Rampage. I'll get to that show ASAP.

Wardlow and Tony have a promo spot in the ring to follow, with the big man making it clear he wants to be free of MJF and to make AEW Wardlow's World.

QT and Keith Lee had a comically bad segment next. Marshall is like an 80's Saturday morning cartoon villain.

Caster's rap ahead of their title challenge was super weak.

The match was good but felt more like a throwaway defense that belonged as the main event of Dark.

Jade promotes her record and says she wants to sexually assault more people.

Thunder won a quick match against Hirsch next, predictably, to set up the match against Baker for next week. TK handled the TR/BB feud below expectations, the PPV match was just a cheap building block so that Rosa could get her big win in Texas, and the entire thing has felt off. This match was super average and didn't help motivate excitement.

The match next week with Baker and Thunder will be in a cage.

They almost always pin the women's content all together.

Scorpio Sky hasn't had a non-YT match in AEW this year. This too felt rather randomly thrown together. Still, I was more optimistic because I have thought Sky hasn't been booked nearly as well as he should be. That countered any feeling of random, lazy booking for me. At least, to a degree. If he had lost and then floated back to the background of random segments that featured Lambert rambling like an alcoholic uncle I wouldn't have been left happy.

Instead, we had the MOTN and a title change that, while a bit random, is something I hope results in a fun reign for one of AEW's most underrated performers. I have no idea what they'll do with Sammy now. I have no doubt Wardlow now fails to win the strap next week, though.

The action wasn't as smooth on this one and the segments were a bit rough, too. I question the writing, too. The good news is Jeff in AEW should be fun and Sky is TNT Champion. Oh, and Garcia and 2point0 have been elevated This isn't really a must-see installment and is one of the weaker episodes I've seen from the company, but there's still lots of good little things here and there.

I'd suggest just heading to AEW's YouTube channel and watching the bits that seem interesting to you. It's likely a better choice instead of sitting down for the full two.