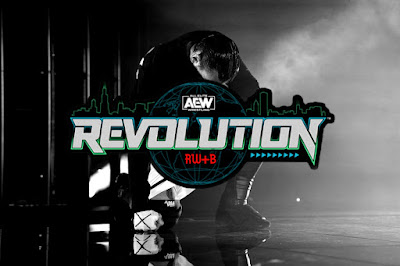 It took me a few days, watching in three parts, but fuck this show was awesome. This card was stacked, but also bloated. I started with the Buy-In preshow, because my bud said it was the best preshow of all time.

I notice Kenny's image during Kris' entrance which was...interesting.

Stratlander and Leyla's match was honestly a rather solid outing, even with the touches of roughness and the shit, protection finish. A better fit for Dark or Elevation, to be honest, but fine for what it was I suppose.

Don Callis came out next, to Kenny's music. It was decent heel stuff. Omega is coming back rather soon, for the record.

Hook's longest match ever followed. He continues to grow and is a major star in the making. QT was fine in his role. This was okay.

It's a bit nonsensical to refuse to count someone for not being legal, then allow a count on them moments later. Outside of that, and that sloppy curb stomp, I have to say that the six-man match was borderline great stuff and really elevated the pre-show. It's fun seeing two different dark units in one company at the same time, by the way. Everyone worked well, including Redbeard, and I recommend this one for sure.

The show proper began with a lot of Draft Kings shit in my face.

Eddie and Chris put in for a great opener proper, with the former picking up a big W. Decent intensity level for the circumstance and it delivered about on par with my expectations. I would love to see Eddie get a Mankind style run with gold.

After, Jericho decided to be a dick and refused to shake Kingston's hand.

Up next, we had the three-way tag team match with the division straps on the line. Jungle Boy was on fire. Everyone was great here, though, and there was some fine story work sprinkled throughout. They accelerated nicely and it was a fantastic contest.

The damn Sonic ring was back, folks! The ladder match was pretty good, over the top entertainment. The pacing was perhaps a bit off, but it's about what you'd expect from a ladder match with these dudes involved. That damn ladder bomb at the finish was sick. Wardlow winning was the right move.

Strickland signed his contract with Tony on the screen next. The dude is going to finally get the respect WWE refused to show him.

Jay and -1 sighting, with Tay's shot at the TBS strap up next. Kingfish played out Jade. Sexual assault kicked it off, and was later returned, with the champ forcing herself on the challenger for a cheap pop. The match was circus act style action and a bit rough at times, though you can see clear growth from both when compared to entries from not that long ago. Also, thank god they stopped the Goldberg shit, at least for tonight if nothing else. Perhaps I should just be happy that there were three women's matches on the show either way? Anyway, I'd call it good overall but far from must-see. Give them a year and lets see how far this growth goes!

Next up, we have MJF coming out with his music interrupting Punk's Cult theme for a cheap heel move. Then, we had a beautiful moment, with CM Punk entering to AFI. A beautiful throwback.

Note that I am a huge AFI fan. I was even in a band named TheAffliction in high school.

Anyway, I had high hopes for this one. Their last match rocked, the promos have been fantastic, and dog collar matches, when done right, are launching pads for excellence. It's a good then that these two fucking elevated the gimmick and put in for a goddamn classic. They took the build and delivered with top shelf action and expert level storytelling.

Sadly, we followed that up with a rather disappointing AEW Women's Championship defense. The story work for this angle had been below expectations heading in, but there was still a hope that they'd find that magic from last year once again. Instead, they worked the weakest match of the event. With St. Patrick's Day targeted for the rematch and title change, this also felt like just a throwaway match on the road to that bigger one. In short, this was cheap, circus stuff that barely made it out of second gear and no one came off looking good as a result.

Mox and Bryan's encounter was fantastic violence and exactly the brawl I had hoped for. It all worked pretty damn well and even the protected finish worked for the circumstance.

After, the two continued to brawl until MOTHERFUCKING REGAL came out and got them to stop fucking around. An amazing moment and I am eager to see where they take this next.

The semi was a fucking car crash in the best way. Imagine a spoiled child with a shit load of action figures and weapons, playing around and you'll have a good idea of the destruction. I loved this!

Master Chief tried to best Page in the main, but was defeated by the Cowboy in what was just another fantastic contest. Seriously, that's how good this show was. The reDRagon interference stuff was kept to a minimum, the drama was decent, and the action worked well. Page's reign continues.

In all, this was a very long show that was also a very strong show. The matches were almost all highly enjoyable, there were major debuts, stories were progressed, and I sincerely recommend anyone that can find the time to check it out to do so.