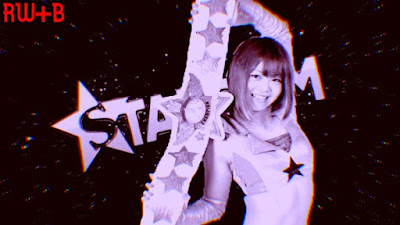 This one is for a fan that mainly watches AEW (previously watched NXT before Vince took over), prefers new school wrestling, is cool with things in different languages, doesn't care much for hardcore and death match content, thinks women's wrestling is the bees knees, likes long, dramatic matches, loves lucha libre as a concept, prefers wrestlers being a variety of sizes, thinks WCW was better than WWF, and is cool with indie wrestling.

Want some recommendations personalized to your tastes? Do THIS survey.

I’ve taken a look at your answers and picked the following recommendations for you. I’ve included five promotions to check out, some wrestlers I think you’ll love, and a handful of matches etc. worth your time. If you need additional information, don’t hesitate to reach out.

STARDOM is what you’d call a joshi puroresu promotion. That means it’s an all-women’s japanese company. I am recommending this brand first because their roster is amazing, the content tends to be awesome, the storytelling is great once you get past the language barrier and are more familiar with the talent, and they have a very easy to watch weekly series that airs on YouTube. The best part? Their program, called We are STARDOM!! is only half an hour long.

For this company, I decided that you might like THIS episode. It’s the 95th episode of the We are STARDOM!! show that I had alluded to above. I personally loved this episode. HERE is my short review, in fact. The main event is the finals of a big yearly tournament the company runs.

Since you watch AEW, there’s a chance you’ve noticed New Japan getting mentioned a bit. Before AEW, they were seen by many as the best alternative to WWE in the world. They’ve previously had several other ties with American companies, including WCW.

They have a streaming service, NJPW WORLD, if you’re interested. It’s about the same cost as basically every other similar service.

While I will be the first to admit that the company is a bit in flux right now, they still have multiple match of the year candidates a year. They’ve also done well to breach into the United States. They recently sold out MSG with a show cohosted by Ring of Honor. They are featured on AEW and IMPACT! Wrestling. They also have a US based show called New Japan STRONG, which is rather decent.

If you don’t want to pay to watch a brand new company, I get it. That’s a fair take. Other than STRONG, which airs weekly on that service and on FITE.TV, you can also check them out for free on the ROKU Channel and on AXS TV. I suggest avoiding FITE. You can get far more content for basically the same cost by just subscribing to NJPW World for one month, plus their customer service, in my experience, sucks.

To get your feet wet, watch THIS episode of New Japan on Roku. This one sees Okada versus SHINGO facing off with the vacant top prize of the company on the line.

I really wanted to include an American indie fed here. I was a bit torn, to be honest, on who to pick. PWG is a punk rock workhorse and an icon of the art, but they can be a pain for newcomers. You are already checking out DEFY soon. I ended up picking something not many would think of for this choice, though.

They are Brooklyn based and for sure put off a modern indie vibe and previously called themselves Capitol Wrestling. They run on YouTube weekly and their show is under 30-minutes. HERE is a recent episode they aired that featured what they considered to be their best content from 2021.

Their champion, Darius Carter, is rather polarizing. They spotlight many of the biggest names in the scene when they’re open, including the Ugly Ducklings, Jordan Oliver, The REP, and more. Tuning in will typically give you a good look at some names that might be on TV sooner than later.

This is a lucharesu promotion. That means, in the spirit of Ultimo Dragon, they promote shows that blend lucha libre with the Japanese puroresu style. That equates to high speed action and hard hits. They have some of the best long-term storytelling in the entire industry, too.

They are super easy to watch, because they air Cutting Edge Battle!! on the GAORA YouTube channel on Saturdays. HERE is a link to a YT playlist with all of the episodes. The only bad news is that they aren’t super consistent on when new episodes will air and there have been a few times that only one new installment runs that month.

Shun Skywalker, SB KENTo, YAMATO, Ben-K, and Naruki Doi are standouts but the entire roster is well trained and the DG school does a great job getting people ready.

I think THIS episode of their weekly show is a great entry point. That link is to the review with the episode embedded. It features a fantastic tag team match and a top shelf quality main event.

They also have a streaming service, but it’s sadly one of the weakest wrestling subscription options out there. I still highly recommend this company but, like STARDOM, don’t expect much in the way of English content if you plan on watching the way I just recommended. Once you get used to the roster, the style, and the storytelling, you’ll find perhaps the most entertaining company in the world.

I wanted to end with IMPACT!, formerly known as TNA. Many fans were turned off by the old days of this company, meaning they have a stink that they’ve had a hard time washing away. Note that they do have a different group of people at the top these days and are truly a different beast.

I recommend this company because they are frequently putting out the most entertaining episodes of the week, thanks to solid writing more often than not and a stronger roster than most realize.

Currently, they feature three big storylines that have made them rather entertaining this year.

One is the invasion of former ROH talent. Before Tony Khan, AEW’s boss, announced that he had purchased the brand, ROH had cut their roster and were planning on moving forward with a new strategy. This opened up workers to go elsewhere and some went to IMPACT! and started a group called Honor No More. They’ve been battling a team of IMPACT! workers since. Invasion angles can be fun and this one has been pretty fun, in my opinion.

They also spent last year building up Josh Alexander, who is basically a modern Kurt Angle. The dude rocks. He won the strap last year, lost it immediately in controversial fashion to heel Moose, was involved in a conspiracy style follow up and was suspended, and now is back and ready for a rematch. It’s made for good television more often than not.

Also, the famous Bullet Club unit that started in New Japan has been showcased a lot on IMPACT! lately. Jay White, Bullet Club’s leader, added a new member, Chris Bey, kicked two of the longest tenured members out, re-added Gallows and Anderson, and more all on this show. If you’re interested in the Bullet Club for whatever reason, here’s a way to do it.

Oh, and their women’s division is rather decent, too. Heck, before WWE started acting like they care about such things, this company was having their girls main eventing in big matches.

The easiest way to watch their show, for me at least, is the free method. They’re cool in that they upload full matches and segments from the weekly show onto their YouTube channel HERE. You can check a review site, like mine, 411mania, etc. and see the order if you want OR you can just watch whichever uploads sound interesting.

Some weeks they are better than Dynamite and Rampage.

They have a subscription service on YouTube that is $1 to watch the weekly show or $5 for a lot more, including special event access if you end up enjoying it enough.

Their roster has names like Mickie James and Rhino which old fans will recognize, alongside great workers like Alexander, NJPW’s Jay White, Rich Swann, Eddie Edwards, Ace Austin, and many more.

HERE is a review for last week’s episode, which would be a decent starting point for newcomers. For one, it’s obviously super recent content. Two, it was a strong episode with a great start, some decent stuff in the middle, and a strong finish.

Let me know what you love, hate, want more of, etc. and hit me up with any questions.