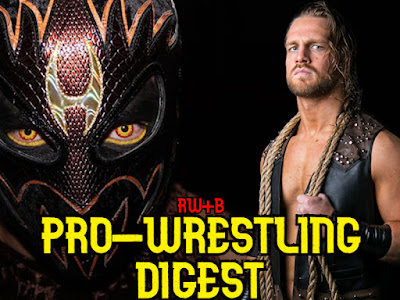 Hey, welcome back for another edition of my weekly Pro-Wrestling Digest series! I've updated my pull list which can be seen at the bottom of the post. I'll delete them from the list once they're reviewed in the digest and carry over any that I don't get to to later editions.
I need to add ChocoPro and GCW content soon.

First, this week, I watched CMLL's Aniversario gig from September. Check out the review of the show HERE.

Later, I started Full Gear. I'll post the full review once it's complete but it might take me a day or two. It's a long, emotion heavy show and I'm pretty busy this week getting ready for holiday.

This was great! I love ciberneticos, and this one rocked for sure. The Ice Ribbon crew shined as did Silueta. Honestly, everyone looked good. Check this one out for sure!

This was fairly good, with an okay pace and length. Well worked overall. The big takeaway though is the revival of Guerreros Atlintida becoming official post-match. I'm admittedly a bit excited by that news. They had been teasing a rudo turn, though it was all over the place, and this was the best case scenario for that situation, in my opinion.

Fuck yeah! My two favorite CMLL roster members killed it here in the first defense of Hechicero. Two matches in and this is already one hell of a reign from the new champion. I loved this and sincerely recommend it. MOTYC level shit.

This next set I watched via the YouTube digest upload via WWE on Fox.

This came off pretty decently but was far more relevant for the closing moments. It served as not just a set up for the main event, but also as a reunion of a unit that never should have been split up. Also, as a set up for New Day vs Hurt Business.

Very good, meat man stuff. I appreciated the intensity level on display and felt is was a very strong defense from the reigning champ.

This one was a great street fight for the blue brand belts. The Usos are such a great team and the Street Profits have continued to do well in their roles. Four men showed up nicely here and I applaud the hard work.

This one was up next. I picked it up via a YT video, which you can see below.

The stream was decent though it was clearly more about being a story-block piece than anything else. Seth won via countout, Big E having caused a minor slow down for KO, and then Owens snapped after on the WWE Champion. Okay stuff.

This one I watched in full. I'm admittedly surprised Owens is getting big wins still right now considering the circumstances, but maybe WWE still thinks that they have a chance at keeping the dude. It doesn't matter. This one was a great singles match. They have pretty good chemistry together.

Check out my review of Ring of Honor TV #529: Championship Edition over HERE if you'd like.

Check out my review of MLW Fusion: Alpha #8 HERE.

So, this one from Wrestle Princess 2 fucking rocked. Miyu is ace level, of course, but Ito stepped up nicely too and they worked their asses off here. The action was tight and well-paced and the drama worked nicely to build this up as it plowed along. It's seventeen minutes, but feels closer to ten. An easy recommendation.

Check out my review of this year's MLW War Chamber special episode HERE.

And, to close this set, I watched FULL GEAR. It took a while to work through it all, but it was a fun ride. Check out the review HERE.