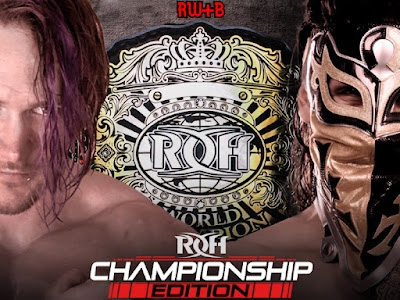 LSG looked good, Woods looked good, and the opener was another worthwhile Pure Championship defense that sits just outside of recommendation levels. The main event was a borderline great World Heavyweight Championship contest between Bandido and the innovative, Alex Zayne. After Bandido put away Alex, Gresham and him shared a moment ahead of their big match at Final Battle.

It's pretty bittersweet even watching Ring of Honor at this point. There are two options for the company moving forward. One, they never actually return which is a fear that has some merit. Many that are being fucked over by the recent announcement feel that's what is going to happen. The alternative is perhaps worse, as it would see them continue in a fashion similar to per-date indie feds. The issue is that Ring of Honor isn't some little indie, despite what folks with melted minds thanks to VKM might think. They are backed financially by a very powerful group, after all. This is a danger to the industry because if they manage to make it "work", others like WWE might make a similar move. They already are making late-stage capitalist moves of late. Imagine if they cut all but a small handful of the roster and then just paid per-date for everyone else.

Anyway, enough of that. This episode features two entertaining championship matches and the entire installment went down pretty smooth. Consider watching either the entire special episode, or the main event alone if you're in a hurry.