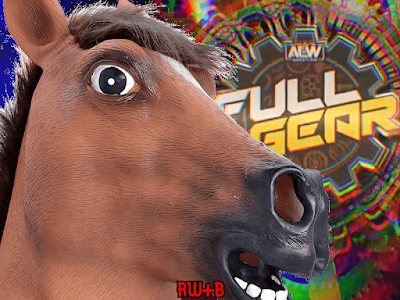 All three performers in the opener here were on fucking point. Yup, I'm including Bryce. This was tech-heavy shit and I am all fucking for it. I loved the pacing, the storytelling, the selling, and the choice of spots. I didn't expect an ebb and flow this strong, nor a near-MOTYC from these two, but here we are regardless. I didn't even mind the chaotic moment with Sting and MJF's crew nor the "shit" finish. It all worked well. Very well.

The troll kings, FTR, had a rough time working against a mashed up lucha team of del Sol and Aero recently because they are stuck in the 80's. It's not the first time, but I was hopeful that they'd make it work against Penta and Fenix. Both are masters of their styles, after all. Luckily, this was borderline great. Sure, there were a few iffy moments and the finish felt a bit off, but the ride was pretty enjoyable.

Note that there was something going around about Fenix having some heat following this. It's bullshit and makes no sense. Plus, Dax nearly ended Aerostar's career twice recently so I think he could sit back down either way.

The American Dragon and Miro wasn't pretty, but that's exactly what I was expecting. This was a fucking ugly fight and I enjoyed it thoroughly. I also love how Bryan has been winning with a variety of finishes lately. The American Dragon looks just as awesome as he did pre-WWE and I'm all in on this ride.

I like AAA. I enjoy ECW. I can get behind some well done chaos. That's what the falls count anywhere match was. It felt like it was a little much at times, but they always pulled things back to the right levels for my taste. I was admittedly surprised to see Cole and the Jacksons fall so early into their reunion, for whatever that's worth. A fantastic spotfest.

Up next, Cody and PAC took on Black and Andrade in a match that felt very much like something that belonged on Dynamite instead of a PPV event. It felt like an on-the-rails match that got a little janky at times. I'd call it good, but not close to recommendation levels, and felt more like a cool down than anything else. Cash attacked after to keep this one on the hook.

The only women's match on the main card was in the six spot. It got less time than the other main card matches before it. I know it's a touchy subject for TK, and I agree that he does more for women's wrestling than a lot of other companies, but there's always room for progress and I keep seeing little things here and there that I know will be fuel to people that are harsher than myself on the subject. Anyway, I am happy to see Tay Conti get this showcase match. She's grown a lot as a performer and I've been really enjoying her progress. Baker, of course, has been on a fucking ride for over a year herself. They worked well together here, but I must confess that I don't think it hit recommendation levels either and also felt like something from their weekly TNT shows instead of a PPV defense. A better finish perhaps would've helped. Good work overall and decent story work.

CM Punk and Eddie Kingston's match was fucking awesome. From a storytelling stance, it rocked. The action was pretty damn fun, too. It was an eleven minute package of fucking pure entertainment and more than delivered on my expectations. This mini-feud was one of the best of the year, folks. That Cena reference, by the way.......

The semi-main street fight was about what I had expected. Well, that's not completely fair. I didn't expect to see the Prince symbol and hockey sticks. Inner Circle worked hard at the smoke and mirrors to make this come off well and it was entertaining if nothing else. Heck, because of Sammy and PnP, this was actually good.

I dig the Eddie tributes tonight.

Shiavone introduces Jay Lethal. He has some baggage and is far from the same worker that he once was, but he's still great in the ring and it should make for some fun content. The segment ends with Sammy accepting a challenge against him for the TNT Championship.

This story has been building since before day one of AEW (and actually isn't even over tonight) and I've sincerely loved the ride. You could literally write a book on the subject. But, for now, the ongoing epic has reached a stopping point. Kenny vs Page had interference and a ref bump spot. It had a bit of roughness around the edges. Somehow, it all worked. The storytelling alone made this must-see, but the in-ring work was fantastic as well. The fact that Omega has been working in his condition for years, being duct taped together in NJPW and dealing with lingering issues in AEW, too, is a just further proof to me that the dude is the best wrestler of all time. Misawa is the only one that really challenges that spot. Page was the right one to win and it all played out beautifully. As suggested above, I could write a fucking book on this rivalry so let me just say this was a MOTYC and one of the most important matches of the decade. Check it out ASAP if you missed it.

In all, Full Gear was a great show. There were issues and I could nitpick a bit if I wanted, but overall this was another awesome outing for AEW and should be seen as another building block for the company as they continue their rise.