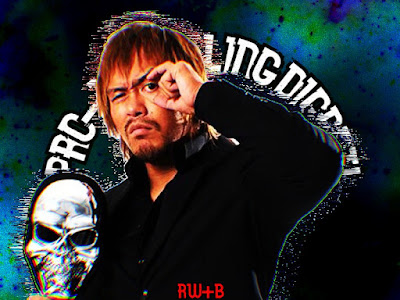 Welcome back for yet another edition of the Digest. We have a journey around the world before us, so lets dig in quickly and get to it. Starting next week, I am going to reduce my pull load a bit more again. I love wrestling, but I keep overdoing it.

Remember to check back as I tend to update this daily throughout the week.

Check out full reviews of stuff that I posted this week, if you want...

1. Orange and Bowens kick us off, with the winner joining the pool for the Face of the Revolution Ladder Match. While admittedly a tad rough around the edges and certainly more entertainment leaning than pure wrestling in style, it was a fine main event singles match. Danhausen's role has been fun and Orange continues to be a nice spark on the dynamic roster. Still, you can safely skip if you're seeking must-see content alone.

I went ahead and checked out the contract signing from Rampage, too. Admittedly, I think they had been doing well to build this but the past few weeks could have been done better. Still, the payoff should make for an awesome contest. Baker cut yet another solid promo in the segment here and she clearly is working on a psychology career to go along with her dental one. It, of course, broke down, ending with Hayter getting a table spot thanks to Mercedes.

Note that the TNT Championship defense was watched & reviewed on the last digest. Check that out HERE.

I moved on to MLW next.

2. Richards is on his way to a title shot and ACH was in his way. This one was a pretty good singles match and admittedly one of the best things MLW has put out this year. ACH got some stuff in and both came off well. For a TV match and an opener, this hits recommendation levels for sure.

Holliday and Alicia spoke in a backstage segment on his betrayal of Hammerstone. Decent, but I don't care much for his in-ring work and therefore care little for the angle itself.

Later, Cesar spoke with Hammerstone and Richards in a contract signing segment which was fine. Their match honestly looks decent on paper. The volume here was fucked up, though.

3. This looked like it could either be very good or a train wreck. I would note that it is likely to be very polarizing, but I personally enjoyed it decently and thought it was rather entertaining while allowing for the fact that it wavered a bit and had an inconsistent pace. In short, I'd call it good, but it could've been better with a little tweaking and less overbooked antics being tacked on.

4. Tanahashi and SANADA are up first, with the US belt being defended. I'll admit that the challenger, and victor, is not someone I consider myself a fan of. He's a good worker, but one of the more average names on the New Japan roster and of his unit. Here, he faced the living legend and dethroned him and had a pretty damn good performance. He's more than capable of such acts, of course. They just don't happen as often as I'd like. Regardless, this was one of those lengthy epic style title matches that New Japan is often home to and a fantastic match in general. Lets hope we get a strong series of performances from the new champ.

5. Next, the God, Okada, and the coolest fucker in the world, Naito. While the SANADA versus Tanahashi match was indeed fantastic stuff, this was far better and far more worth your time if you can only pick one. I sincerely doubt we'll get anything close to that amazing 720 day reign Kazuchika gave us a few years ago with this run, but the fact is KO is one of the best ever and the New Japan roster is so stacked that they can overcome Gedo going insane when placed together properly. I will forever hope we get a super long, awesome Naito run, but it's time to take in this reign for what it is and hope for the best. Here, they worked their asses off for a MOTYC as Okada starts this one off and I recommend fans to check it out ASAP from an in-ring stance as well as historical reasons.

6. This was a fun spotfest for sure with a breakneck pace. Ace ended up taking the L clean to Something, but I would've been cool regardless of the outcome. I do wish Bey would get more nods. Great, X-Division shit.

7. This wasn't as smooth as it perhaps could have been, but White and EY still put in for a good match and it was perhaps better than some might have expected it to be.

Note I caught the end of the tag match between GOD and the Good Brothers, with Jay turning on longtime unit-mates in favor of Anderson and Gallows. Two sweets were thrown up after. Decent, intriguing stuff at the very least.

8. Perhaps a bit clunky at times, a tad overbooked, too, but this hoss match was solid stuff. The first half in particular worker rather well. You in no way should consider this must-see and it felt more like a TV defense in all, but it was far from bad too.

Hey, I'll be on this week's AEW media call. Lets see if I get called on this time.

9. This angle has been pretty fun, but I like invasion angles when they are done decently so I suppose that's not a big surprise. For a clusterfuck, they made it work and it flowed well enough. The action was quality and the endstretch was rather entertaining. You can't ask for much more than that in this situation. Eddie turning on his home fed was an interesting move as well. In all, I'd say this was pretty good content. Your mileage will vary, but if you've enjoyed the story thus far, you'll certainly enjoy it.

Two from the UK next.

10. This was a heart attack, festival of high octane action and a thrill ride of a match. I fear this one will get ignored by too many, but make time for it if you can.

11. Yeah, this was nearly perfect and an amazing display of what pro-wrestling is right now. Ospreay is one of the best workers in the world, of course, but Oku more than held up his end of things. The drama was top shelf and almost everything about this was just magic. Consider this a legit MOTYC and a must-see battle.

This week, KO and Seth had a segment with Alpha Academy that you in no way need to see.

12. After, they had a good but forgettable tag match with the champs falling clean.

I watched Edge challenge Styles and turn heel. Dude needs conditioner. Bad. Poor AJ always gets hit in the junk. Watch that HERE if you care to.

13. Finn won the US strap, Priest acted like a dick after. Decent match. I am happy to see the change but it was more plot builder than moment to appreciate. Having the champ get destroyed right after winning a belt is such a WWE thing.

14. Bron got a much needed bit of experience against two vets, and came off pretty well, Ciampa got a bounce back win on his show, and the heels came off well, too. Good stuff in all.

15. Hayes is growing nicely and was the right choice here. Dunne was serviceable as always. Fairly good stuff, though a bit rough around the edges.

16. Next, we have a tragedy. Nakajima had a lot of steam left in this run and a better choice would have been to have Go dethrone him. Instead, we'll hope GS dethrones Fujita. The match itself was enjoyable enough at least and the new champ is a decent worker even in his age, but it's a clear step down. Alas, shit happens and NOAH can be crazy at times.

Over to IMPACT! next.

17. Six-man tag team action, continuing the Honor No More angle. I've sincerely enjoyed this storyline more than most, it seems, and considered this a fairly good addition.

After, Eddie came out to stand by the heel unit and explain his actions. It was a fine segment and a solid promo. I am honestly excited to see where it continues to go. If HNM is left out of the ROH reboot, as I think it will be, it'll add a nice new layer to the story, by the way.

With that, I'm done for the week. Thanks for reading, as always.