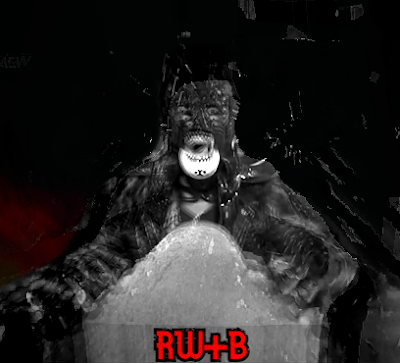 So, this one is interesting. The only match, from a pure quality stance, that you need to see is the main event. I'll get to that in a moment, though.

The opener was a good battle royale, which to me is rare, but it was still far from must-see. Just watch the quick YT video on it and you're good, in my opinion. reDRagon won, with the Bucks being eliminated last for clear drama reasons.

After, Page came out to beat on Kyle and Fish, causing Cole to run out. The Bucks walked off, allowing the attack but not helping it. Silver did assist, though. The segment that followed was a tad clunky, but largely fine as Cole vs Page nears.

Bryan laughed off 2point0, suggesting Garcia could be far better with a mentor like him. I dig the Regal shoutout.

Now, the MJF promo was fucking awesome and sincerely interesting. My prediction after that? Either MJF goes even bigger heel, somehow or...we get a triple turn.

Regardless, I would far prefer you go and watch the promo instead of reading me talking about it. Click HERE to do so.

Penta Oscuro and PAC won a match against Black and Brody via roll up. It was far more about being a building block, though. Pentagon Dark is here and Buddy appeared after, finally, joining House of Black. The story shit was good and the match has some moments. Be prepared to see Buddy kill it, because the dude is amazing.

Next, Eddie and Chris had an in-ring segment. I agree with Kingston that I would have preferred a fight, but it was a fine bit. Jericho mocked WWE for not being entertaining, the shots at Eddie were decent, Eddie's responses were good, etc. Not my kind of thing, but fine regardless.

Starks picked up a nice win next. The match was far from must-see, but worked fine for what it was.

More drama with Cole, reDRagon, and the Bucks.

Goldberg got another win, in a match with a clunky finish, next to retain the TBS strap. After, Conti came out to be next. I am a fan of her and I like Bunny enough but this entire bit was very basic at best.

The ladder match is promoted a tad via Keith, Starks, Hobbs.

We closed with Bryan and Garcia. So, this was great. It could have been better. Garcia is a very strong worker that is still growing and is already capable of more than he showed us here. Despite that, I still do recommend considering this one even if I personally expected more.

After, Mox saved The American Dragon from an attack from 2point0. A promo followed. Good enough shit.

So, this one as I noted above is interesting. I'm for sure more of a wrestling first, soap opera second kind of guy. AEW is a variety show and it doesn't always land for me. My episode ratings are always more based off of how good the in-ring action was with a tiny bit being tacked on for the rest. Here, we had a show with mostly okay wrestling and a great main event that slightly underdelivered. The MJF promo rocked, I love seeing Buddy finally debut, and Penta going Oscuro is a nice sight especially since I am a huge LU fan. The rest was okay.

In all, I'd say it was a good episode that I am sure will be awesome to others. If you're more into Western style entertainment wrestling, you'll likely be the latter group.