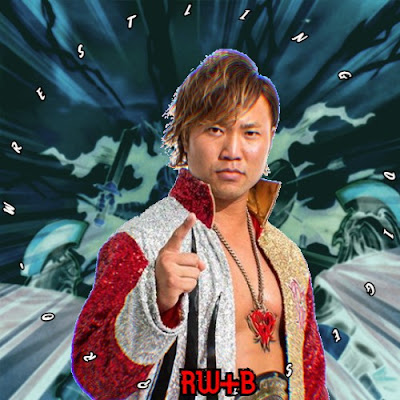 Check out some full reviews I've posted this week:

It's time for another Digest, folks. This time around, we're starting with some All Japan Pro Wrestling. They're 50 this year. That's pretty cool.

1. Up first, we had #SH's T-Hawk and El Lindaman dropping the All Asia Tag Team Championships to TOTAL ECLIPSE. While this was pretty good, I feel it was a nerfed down version of what I expected. The endstretch was the highpoint, but the build didn't work well enough to add enough fuel to that fire when it did start to burn.

2. Next, we had a MOTYC to make up for the first pull. Ashino and Suwama were awesome here as were Kento and Aoyagi. The pacing and action here were top shelf and it's sincerely one of the best two on two matches I've seen in a while. The best part is that three of the workers involved are so damn good that they made this look easy. Make sure to add this one to your watch lists for sure!

Three of the four men involved in that awesome tag match I just spoke of made up the remaining All Japan, and the next three, pulls. With the title going vacant, it was time to crown a new champion. A one night tournament was the solution.

3. The first match of the series saw Kento and Suwama play a condensed greatest hits sprint. It was good, but just a sampler of what they're capable of and the cheap finish didn't do much for me, either.

4. The second was actually good, though also a sampler of Ashino's capabilities. The layout of this sprint with Honda playing largely from underneath worked especially when the dude pulled out the victory. They bullied about for about ten minutes though and it was fun for a bit.

5. We closed this with a fair outcome. Many companies have a dude they fall back on when they need a champ they can count on and Kento has quickly turned into that dude for All Japan. I consider him one of the three best workers in the world though so I'm cool with that. The match itself was fresh, but below expectations of a Triple Crown bout. I hope Honda gets more spots as he continues to progress, but this just didn't land as well as it could've. Pretty good, but rather forgettable outside of the outcome. This happens to put Miyahara equal in reigns with the championship with Misawa and Kawada and finally past Hansen for those keeping track.

Oh, it's Keith Lee by the way. For those that care. Yes, that's how I tend to drop shit for those that don't know.

6. This one was a banger! Yuji is one of the best big meat men in the game and Nomura has grown a lot as a worker. They worked hard and made this a worthy main event and worthy championship contest, too. They've had a few strong showings together over the past five years and I am thinking they have a handful more left. Don't let this Big Japan gem float by you!

It looks like Goldberg will be a throwaway defense for Reigns at the Chamber show. Sigh.

7. I linked the YT clipped version above, but the whole thing was worth walking to. New Day and Los Lotharios was a pretty good TV tag match with some good drama and quality action. Heck, I even thought we might get a surprise result.

8. This one was good TV stuff. Completely forgettable, but good. Owens was serviceable as always in his role and Austin held up his end, too.

My only question is how long before Vince just sells WWE to the bonesaw crew?

9. They started early with this one and kept a decent pace throughout. The Creed Brothers are growing on me nicely and GYV have been one of WWE's most underrated teams for a while now. Yeah, this was pretty good stuff. Too bad no one is watching the brand right now. MSK would win their match later in the night, setting up the finals of this year's Dusty.

Next, we had what was labeled a Championship Summit with Breakker and Escobar. It was interrupted by Dolph Ziggler of all people. Ciampa joined the party next. The two party crashers brawled to end the segment as Escobar put the champ through a table. It was fine and should make for two decent matches.

I have two from last week's We are STARDOM!! as the entire episode didn't strike me as being must-see.

10. Starlight's Queendom defense was legit a high speed affair, with a large chunk being a series of lightning strike pin attempts until SLK managed to nail the victory. I have a hard time rating it higher than three, as it was a tad rough around the edges, but this really was a good throwaway.

11. Konami's last match in STARDOM was a tribute to Hana and a great singles contest. The 4th of such from the two was also their most emotional and something worth considering for fans of the brand and the fallen talent. I hope Konami is doing well working on herself.

12. The rematch was good, but below the level of their previous encounter. The lucha side pulling ahead here was a nice move at least and I think a blowoff could make for a great contest with the right layout.

13. This one was one of the best women's matches WWE has put out in a while, especially from the "main" brands. That's actually sad considering the roster, but it's just one of the things that happens in a company like this. Flair and Naomi went about twenty and worked hard to make this TV main event title match feel like a big deal. Props. Great stuff and worth a visit.

SmackDown this week had about thirty-five minutes of wrestling on a two hour show. The good news is that the ones that mattered most came off well.

That's it this week. Thanks for reading.