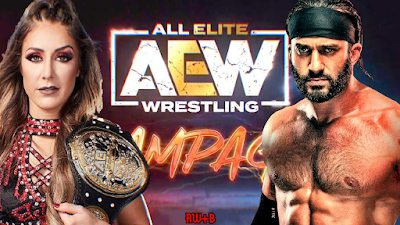 They opened once again with a main event level match to catch viewers at the air time. These two teams have a long history together full of fun content and this addition to the pile was entertaining for sure. I'm just happy to see Trent and Rocky teaming again. Very good stuff and a fun way to kick off the latest episode.

After, Jay White attacked Trent while Matt and Nick watched.

We're getting Bryan versus Lee next week!

The women's match was more competitive than I would have expected, but Renegade has some potential and they got a chance to see that as well as show that. Baker got her obvious win and Thunder ran in after to keep that angle moving. A touch of tension between Hayter and Martinez was added in for good measure.

Hirsch and Kris is continued in the form of a quick backstager.

Hook continued to fucking rock in the semi-main as they continue to grow this dude into a star.

The main saw Gunn Club challenge for the tag straps. They're not really ready for that level but I do give them credit for clearly growing as workers since last I saw them. This was a tad overbooked, circus act TV, but it was good overall and arguably better than it could/should have been. It ended the episode on a fun note, too.

In all, this installment was a solid hour like usual. Angles progressed, some quality wrestling. Not much to complain about here nor too much to brag about, either. Sometimes, that's enough.