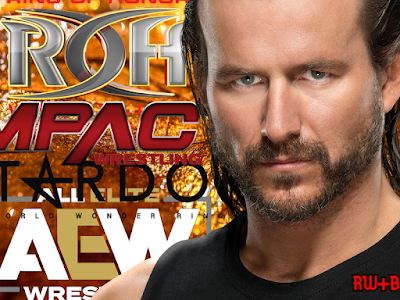 READ MY FULL WE ARE STARDOM!! REVIEW HERE

Click the links above for ratings and thoughts on full episodes of shows that I watched/reviewed.

Moriarty and Garcia's match on Elevation was good, tech based shit and I really enjoyed it. Lee's moment didn't seem to air on the episode, unless I overlooked it when pulling this match, but I'm happy for the dude.

Last week, I checked out CCW for the first time. It was fun indie show stuff. This week, when I posted the results (which I just recently started doing in general), I noticed Davey Richards versus Brian Cage was the main event for the latest installment. MLW vs AEW. That's enough to get my attention. I'd say it was a very unsafe show, for those that care about such things, but the crowd was also so small that it could also be seen as just a small collection of maskless Floridians gathering to play Russian Roulette. But yeah, Cage and Richards put in for a pretty good one here. You'd be excused for thinking they'd be on autopilot, but these dudes decided step up just a tad past that mode and it was good shit as a result.

Over on IMPACT!, which I admittedly watched most of this week, we start my pulls with a good, technical based match from Petey and TJP. After, Maclin dominated ahead of Victory Road. Good shit.

Next, Skyler acted like a dick and then had Laredo Kid work down in a match that never really felt like it got going much before ending in a thud.

On the promo side, Bey spoke shit in a decent backstage promo while Hikuleo stood awkwardly next to him. The Good Brothers spoke shit, including a random fat joke, until a fun moment saw Mack and Swann beat them up a bit. Lastly, Team Christian spoke ahead of the main event which served as a solid lead-in.

That main event, a massive 10-man tag match, was chaotic while adding a few more layers to ongoing angles ahead of Victory Road and other shows to come. In that, it succeeded at the clear goal while still staying outside of must-see territory. And honestly that's fine. Not everything needs to be a MOTYC and considering the match-type this was still very fun for what it was.