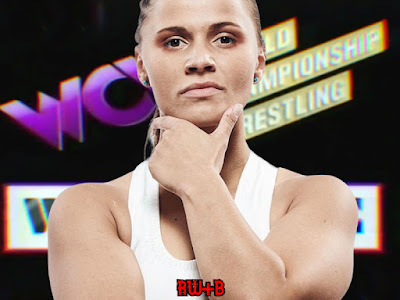 We started with Jade and Leyla talking shit. This is the first episode of Dark to air in the new format. I will say that I am very excited about the change while also annoyed from an OCD standpoint. The name Dark suggests that dark matches are going to air on the program. Elevation previously was basically the same thing as Dark with a different commentary team with few differences past that. Now, Elevation is going to be the only one airing actual dark matches and Dark will be Worldwide. Things like that make my mind go crazy.

Excalibur was missing still here, due to getting married, but will presumably be back when they tape next time. I like Tony but Excalibur and Taz are perfect together.

The first match saw Butcher's return and him and Blade running through their opponents.

Next, Anna Jay picked up a quick one, too. Bunny attacked after. Tay made the save.

2point0 padded their own records in the three spot. They win these matches to help bounce them back and to add to their win counts, but they really will need to get an upset victory soon on Dynamite or Rampage.

The last legit squash came fourth as Jade plopped Risk around. Jade still doesn't do much for me but I get why some like her. I still find her trajectory a bit much. Smart Mark said she'd squash Leyla on Dynamite, too.

Fuego can't even avoid playing from underneath against Mysterious Movado. It was an okay match, but nothing special.

Spears was up next to take on Khash. It felt a lot like something you'd see on CWFH. It worked for what it was and serves as an okay primer ahead of Spears/Darby on this week's Dynamite.

Sonny spoke about Janela being a dick. They'll face off next week.

The HFO/Best Friends drama continued in the semi. Good six-man. I continue to enjoy the rivalry, perhaps more than most. I LOVE seeing all of these CHIKARA dudes on a big platform.

They closed us off with Leyla picking up a win ahead of her match with Jade. I appreciated the way the episode was bookended with the build and note that @Culticon even was convinced that Hirsch was getting the nod on Dynamite. Leyla legit is a great worker and has a lot of potential to be a star, as long as AEW is willing to make the move. A pretty good main event and an easy MOTN.

Can we get Leyla in Team Taz?

I like the move for Dark, despite the little nitpick above, and think this will be a great thing long term, especially when Excalibur is back on the show. I still think a championship or something would make the show better, but AEW Worldwide is a fun series regardless and far more enjoyable than it should be. This one was perhaps a bit weaker than some of the more recent installments, but it also served as an entertaining debut in the new home. Give it a spin if you want, feel safe skipping if not.