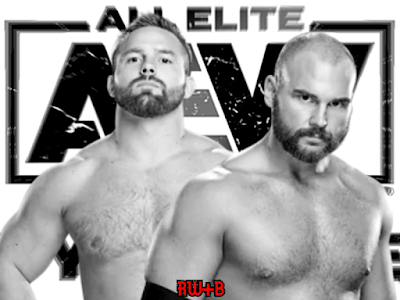 CM Punk's music hits and he joins in on commentary after jumping into a COVID pool. I love this arena (I'm a huge Devils fan) by the way. Oh, and Raw's numbers this week were pretty iffy so there's a chance AEW could top them once again. Maybe even overall, though that's not as likely.

The first match of the night saw The Elite Hunter taking on Adam Cole in the latter's AEW in-ring debut. I'm thankful that they kept the ongoing theme going of competitive matches where most squashes are kept to YouTube, because a quick win for Adam wouldn't have been nearly as fun as this was. Plus, Kazarian got another showcase of his own which just helps increase the threat that he's supposed to present, even in defeat. Borderline great.

Cole grabbed a mic after for story time. He sets up SuperKliq versus Christian and Jurassic Express for Rampage next week. Jungle Boy's name got the biggest pop of the three faces.

A Lucha Bros package airs setting up a match versus Butcher & Blade on Rampage this week.

The trailer for the new Venom film ran during the commercials. I hadn't seen any of the ads yet for it but I'm likely to watch it when it comes out. The first one was fun and I love Carnage.

Fuego del Sol and Sammy chat with Tony backstage. Fuego has a new car and he's wanting to put it on the line for a shot at a rematch versus Miro.

MJF time. He cut his own music. He mocked Jersey, mocked fans that were offended by his promo last week, and then had a little chat with the spirit of Pillman while looking down. Junior's tune hit, Wardlow was sent up the ramp while Brian ran in behind MJF, but then Pillman's baby boy failed to actually do anything about it. He had to then run Wardlow off while the heels then walked away to end the segment.

They cut to JR and Junior in a taped sitdown. Props to AEW for proving again how quickly they can elevate someone, though it was a mistake not to do something with that buzz he had a few months ago.

Also, note that MJF falling to Jericho didn't hurt the former at all.

Jurassic Express and Christian backstage had some fun on the mic. Christian's shot at Cole was good shit.

Next up, Dante Martin and Matt Sydal took on FTR. I wonder what's up with Matt's brother. Also, they've let the buzz on Martin simmer down a bit which feels like a mistake. They can easily make him the AEW 123 Kid. I will say that Sydal and Dante are a very fun team (and a fun trio when the younger Sydal is around). I hope Dante's partner returns soon because I think that team might be the best chance Dante has at moving up further in AEW. Anyway, enough rambling. FTR continue to be an elite oldschool style team and they overcame the high octane tandem to get back on track. The match had a lot of equality and some nice near falls. In all, it was a truly great contest.

Rampage will be two hours next week. I had heard that TNT was interested in moving Rampage to two hours and I'm pretty sure this is the test. They did their worst numbers last week for Rampage but they're in a deathslot, have exceeded expectations, and are still doing better than what previously would air here.

Punk and crew spoke on the Suzuki Incident. The fact that AEW picked up on this is fucking hilarious while also showing that they tend to listen to fans more than basically any other company.

Lights out. Black's music hits. The dude has such an amazing entrance. He called out Rosario Dawson for wearing a Nightmare Family hoodie. Cody worked his way down through the audience, Dawson climbed on Black's back, and then the two dudes brawled into the crowd. This build to this rematch has been a bit iffy at times, but I'm still hopeful that the payoff next week works out as well as it easily could. They battled high up the steps until a cut to commercial. This was...okay.

Did you know that Dawson plays Wonder Woman in the excellent DCAMU films? I love those movies so this felt like a decent place to mention that.

The Bunny, Ford/TayJay feud is promoted with a Bunny package. Anna and Dark Order are backstage. Evil Uno cuts off Jay and then drama follows.

It's go away heat time, with Dan in the ring with ATT, Sky, and Page. I really have no idea why this dude continues to get air time and I don't think this is helping the Men of the Year very much. Jericho interrupted and came out with Hager. The entire segment did little for me, once again. Not even Chris can really save this Dan shit for me. This all set up a match for next week. If I wanted to hear someone cut a Dan Lambert promo I would just go on YouTube and look for a dude in a truck filming on his phone.

Gunn Club is promoted. There's been no follow up since they attacked The Giant.

Jade versus Leyla time. I was really hoping they'd put over LH here. I first saw her in CZW and had huge expectations for her career. She's already on a faster track than I ever expected and a win here would have her instantly elevated up the ranks where I believe she belongs. Jade is still very green despite having some potential so it's an easy choice for me. They leaned into a David vs Goliath format, which was the logical choice, but sadly we didn't get the outcome that I was hoping for. I guess TK did warn that he was pulling back from the hometown pop a bit. It was an okay match, but nothing special.

A Dark Side of the Ring ad aired during the women's match. I believe that AEW is waiting to see how the dust settles on the newest episode before bringing in Papa Flair. Speaking of, Andrade promoted himself as a kingpin and they ran a package that followed last week's PAC match in a logical way.

Apparently the NY AEW shirt is out of print. Fuck.

Taz and Hook came out because Punk took his jerb! Hobbs attacked from behind. Team Taz stood tall after putting the Chick Magnet through a table. This was much better than the forced shit that set up the angle last week.

We were then given a look at the Spears/Darby build. It's actually cool that they mentioned the 2019 match at Fight for the Fallen.

Spears has never been a dude that will blow you away as a performer, but he's a perfectly acceptable worker and a solid choice for a throwaway feud for Allin right now. This one worked well for what it was, too. Darby, the crash test dummy, bounced around for AEW's Chairman before inevitably pulling out the win. The steel steps dive spot rocked.

FTR got into it with Darby and Sting afterwards while Tully tried to get involved. The heels stood tall after Sting got spiked. That was uncomfortable. The removal of face paint here was well done from a visual standpoint.

Bryan and Omega continues to be teased. Danielson joined Tony in the ring in the next segment. I am unsure if I've said so already, but I love that he's going by The American Dragon again. I'm a bit fearful that they are cutting it close again this week, by the way. The segment was pretty damn good, at least. The fact that Cole set up a six-man earlier made this seem super likely though I suppose the date for the match wasn't mentioned.

MOTYC is written all over this one either way.

Miro is annoyed at Fuego.

Matt is annoyed with Orange.

Nevermind, Omega/Bryan is set for next week. Great choice. I'll try to do previews for Dynamite and Rampage Grand Slam. A lot was announced for those two.

We have about ten minutes left for the main event. I do love how they make two hours feel like one.

So, who do you turn heel between Mox and Kingston? A rivalry between the two would be amazing television. 2point0 and Garcia attacked early at ringside. A lot of PIP tonight and this one was no exception. Sadly, once they returned to full screen 2p0 had a rare misstep. Eventually, Mox and Eddie put the heels away. Good, short stuff.

Mox's music was cut. Suzuki's hit. Have AEW not printed "I survived the Suzuki Incident" shirts yet? Archer pulled Eddie out, Mox and Minoru battled, and the four just brawled around in general to close the episode.

I didn't love everything, but AEW is a variety show and they once again gave us two hours of awesome television. Great shit and an easy recommendation for anyone that skipped watching it live.