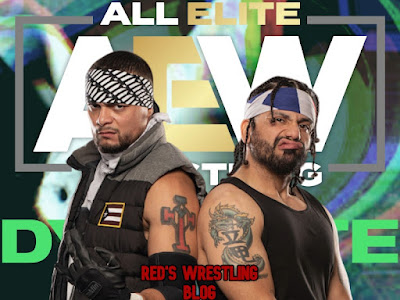 Announced Card
1.Jack Evans vs Orange Cassidy
2.FTR vs Inner Circle's Santana and Ortiz
3.Penelope Ford vs Tay Conti
4.Brian Cage vs Powerhouse Hobbs
5.The Elite's Young Bucks, Good Brothers vs Jurassic Express & Lucha Bros
Thoughts & Predictions
Note that Cagematch had originally listed Dynamite incorrectly with the 100th edition being listed as last week's installment. While I found it strange that they hadn't mentioned anything, I accepted it as a weird choice and moved on with things. I had to go back and update the past few weeks of Dynamite reviews and previews but I might have missed something. For folks with OCD, I apologize and am willing to make any edits you find that might be needed.
Elevation and Dark reviews should be up tonight and I'll finish last week's TV roundup post as well. I'll also be posting an All Out preview this week for those that might be interested. I'll see if I can get some interesting bits of intel from my sources to post there.
Anyway, tomorrow we are getting the 100th episode of WCW Nitr....I mean, AEW Dynamite.
Rejoice!
We have five matches announced for the episode.
Up first, the HFO and Best Friends drama continues as Jack Evans takes on Orange Cassidy. It'll likely have some interference stuff but should be a very fun match in general. I honestly could go either way here. Cassidy could win or Evans could score a cheap V. Nothing between the two units is announced for All Out but it's not over yet either way so the latter seems perhaps more likely than the former.
A rematch between FTR and the former LAX boys promises to rock our collective socks off. When exactly did they drop the PnP name, by the way? Their last one was intense and very enjoyable, even with the scary, rushed finish. I expect this one to keep that tone. The winner will likely get a shot at the Bucks in New York. I think it'll be Ortiz and Santana, but it could really go either way.
Ford is seemingly aligned with HFO now and will be taking on Tay Conti. Will someone steal Penelope's gear again? Will Tay get to finish dancing her heart out before getting blindsided? The sole women's match of the night should be decent stuff. I'd love to see Conti win but it seems more likely that Ford gets the nod here instead.
Brian Cage continues his war against his former buddies, this time in a match against Hobbs. Athletic hoss shit is to be expected as well as a BC victory as he works his way through Team Taz. I expect a short banger.
Lastly, The Elite face off with Penta, Fenix, Luchasaurus, and Jungle Boy. Depending on the time given and the layout, this should be a runaway MOTN and TV MOTW. I could see one of the Good Bros. taking the fall or a cheap finish in favor of The Elite. I think we might honestly get a title change at All Out and then a three-way ladder match in New York, but that's not based on anything. Maybe even a four-way with FTR added in. Who fucking knows. Since this is on the 100th episode, I think the face side gets the W on Dynamite if I had to pick.
Segments announced include something involving Punk and sitdowns for Jericho and one for MJF.
Much of the night is a toss up as far as result possibilities and the card is more stacked than I think many are expecting. Tune in on Fite or TNT and complain on Twitter after about how wrong I was or whatever if that's something you enjoy wasting time on.
Thanks for reading, as always.
Wrestling