Back to the Temple #1: Lucha Underground S1E1 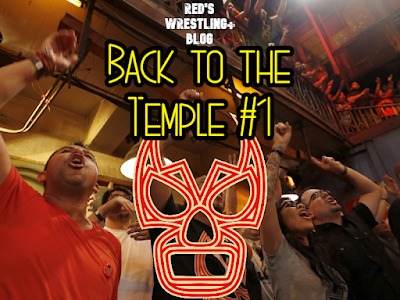 I find myself thinking about this amazing show all of the time. I also would note that I started my reviewing habits after the series had debuted and I never actually covered the first season. These two things, coupled with the show being easily accessible on Tubi for free & legally HERE, and I've made the choice to go ahead and finally fix that mistake.

We start with episode one, of course. This isn't Star Wars.

Let me add real quick that I admit that the show didn't treat the talent as well as they deserved, which is upsetting considering they're the reason people watched. It also ended on a lower note considering the final season was enjoyable while still being the weakest of four.

Just being blunt up front.

So, we see a brawl with Azteca kicking some ass and then he mentors a hooded figure on lucha libre.

Dario introduces himself at TripleMania as fans boo loudly, because that's what you want new viewers to see.

Clips of the roster members are shown and then a shot of downtown airs.

We're taken to The Temple, "lucha" chants ring, Santos has a mic, music plays, and Matt and Vamp welcome us in. It feels good to be back. Dario is introduced, he tells the crowd what the tone is, and he opens a briefcase full of cash. $100,000 will go to whomever impresses him the most.

Match one sees Blue Demon Jr. and Chavo Guerrero in singles action. For the sake of tradition and significance, it's an acceptable nod to the art of lucha libre but the quality itself is far below that of what Lucha Underground is known for. Neither were very big parts of the series on screen which was probably the right move in all fairness.

Konnan is in Dario's office and tells him that he has the best luchador in the game to offer. Dario says he has Mundo signed but wants him to respect The Temple. It's a good set up for the main event. After a break, we get to see JM working out. They then show a package for Prince Puma. I really wish Konnan would've stayed around.

The midcard match sees Son of Havoc versus human trashbag, Sexy Star. Showcasing such a matchup on the debut episode was smart. I love intergender wrestling. Too bad AEW doesn't have the guts to do it. The packages on this episode already are pretty quality. Havoc tells Star he won't wrestle a woman and makes her leave. The ref starts to count. Star attacks SoH from behind. You can really tell the fans weren't sold on mixed work and Havoc was instantly a hated heel just for participating. Basically a squash overall. SoH takes the V.

The main event was great, quick-paced stuff. I really miss Ricochet and how determined he came off in his role. Mundo looked so inspired during much of Lucha Underground, too. They put in for a well laid out contest that really did well to not only cap the episode off on a nice note, but they also set expectations for the series to come.

The end sequence in general rocked.

Mundo won, the fans cheered for them, and then Johnny held up the arm of the fallen danger cat. Dario tried to cheat Mundo. The Crew came out for a save for Dario, beating down Mundo and Puma while standing tall. Dario

This is one of the best debut main events in wrestling history as far as I'm concerned and yeah, a borderline great episode.

The opener was something for the lucha traditionalists. The second for the more progressive fans and to set themselves apart. The main was a star powered match meant to really sell you on the show and an attempt to bring you back for more. For a debut, few promotions (or shows in general) have surpassed this. Lucha Underground was Wrestling Society X revived with a twist and I'm happy to be diving back in.

Back to the Temple Red's Reviews Throwback Reviews Wrestling