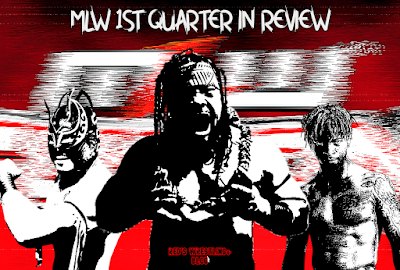 From Kings of Colosseum Special Edition

For MLW, these are the five that caught my eye for the first three months worth of tapings. While I tend to be disappointed in MLW more often than not, finding the product to underdeliver far too often, I still think there's enough here to occasionally step up. If Court could grow thicker skin and drop the ego, the company would be far better.

Up first, a Middleweight gold bout between Myron and Lio. Fairly good match but one that didn't hit that level I had hoped. It's a common issue in my opinion with MLW and one that predates COVID. Whomever agents the matches isn't super and admittedly I feel the talents come in and phone in a tad, which might have to do with the taping style.

Next, ACH and Fatu. Same issue. ACH was nerfed because of an injury angle which, as a result, nerfed the whole match. Just enough to be good and Fatu looked like a solid champ in the process, but it could have been SO much more.

The first match to hit worth-seeing levels was for a non-MLW championship. I remember a dude on Twitter recently insisted that they don't show the AAA Mega Championship in AEW because of the ongoing lawsuit that AAA is dealing with. I pointed out they do show the belt and also show belts from the lucha fed on MLW. He blocked me. Anyway, Zenshi is a super nice dude and a worker that I always find interesting. Sure, he's not the crispest dude in the game, but he can make for a decent target when booked in the right situation. He and Laredo did just enough to make this recommendation worthy though mileage will for sure vary greatly on this one.

The follow up saw Lio Rush win the AAA Cruiserweight Championship against Laredo Kid. They didn't give them enough time and it didn't break out past 2nd gear, just missing recommendation levels once again for me. Anywhere else and this would have been around 4 star range. Note that even Cubs Fan couldn't explain the illogical paradox that took place after with the AAA green belt, by the way, and I'm not going to try to make sense of it here, either. If you don't know what I'm talking about, just know that AAA, and lucha feds in general, tend to do weird fucking things with their belts and thinking too hard about it is always a fruitless experience.

Second to last for the set, Fatu and Oliver. After the last World Heavyweight Championship match with Fatu, being the match against ACH above, the champ was attacked by Jordan and Reed. It started hot, which was a nice move, and kept a decent pace. It surpassed expectations and despite Oliver having no chance of winning this, I still enjoyed seeing him get a shot. The dude is underrated and could be the Darby of MLW is Court knows what he's doing. He likely doesn't in this case, but it's the same dude that uses Laredo the way he does while having an ego about the size of Gabe's. Worth a look, though I might be higher on it than some. Tankman attacked after for the save, which set up a match I reviewed HERE.

We close with Hammerstone versus Park. I saw someone suggest that Alex should start a unit with Austin Aries and other COVID deniers online a while back. Just figured I'd mention that here. Ever hear that Vliet interview with AA? It was a train wreck. But yea, Park is best at hardcore matches and walk and brawls. Mix 'em for best results. Here, they instead tried a ten minute wrestling match and they even got him to fall clean, which is surprising af. It should have been a thud but was somehow good overall. Mil Muertes attacked after.

I have a few from April to check out and then the season finale. Check back for those to be posted soon.