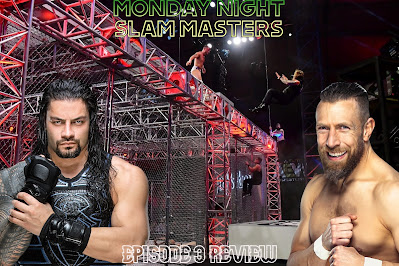 Darby attacks Ethan and Sky, just to be thrown down some stairs like the crash test dummy he is.

After the latest Midcard rundown, our first match was a falls count anywhere battle that was great but hurt a tad by the interference based finish. Isiah continues to be a dude that kills it constantly despite rarely getting proper praise for that fact.

Miro's promo and arc of late finally suggests he's about to be getting the push most presumed he'd get once he originally signed. I'd actually love to see a title change, and note that Allin can feud with Ego and Sky without the belt.

Over on Ring of Honor, we had a surprise title change with Deppen besting Hotsauce in a very good, technical based battle. It felt very much like a pure rules match without the pure rules in place. I'm a huge fan of Williams but am very intrigued to see how the new reign plays out.

Tag Me In this week mainly was a set up for Blood & Guts. I went back and watched the whole thing and consider the match itself fantastic stuff, utilizing the gimmick nicely enough and bonus points go to Sammy for stealing the show. The action and drama were well done and the amount of color felt right for the setting. The finish was well done too and showcased once again MJF being the smartest dude in AEW. Now, after the match is where I take real issue. AEW's production team has once again become their biggest rival and the post-match angle that was brilliant on paper came off like a thud. Jericho was shown falling onto a crash pad in a way that kind of killed the tone a bit and the entire thing became the joke of the internet. While the fans that were calling for a spot that would have killed the old bastard can fuck off and while folks like Shotzi are likely just bitter because of past interactions with Chris (Tough Enough), a majority that I saw when looking around was people agreeing with me on the production being the sole issue. The recent Mox/Omega match ended in a thud and this did, too. Both were highly enjoyable matches, but I know many people remember what happened last the most and balls were dropped.

I enjoyed Bandido vs Flamita well enough, and even found it to be pretty dang good, but I will say the ending was crap and just made this a building block. A ref bump, ball shot, and pin that made it seem that a lowblow is worst than big spot power moves, and you have a good thing going sour. I've never cared for stuff like this and still don't. At least the Blood & Guts blooper reel moment was post-match. I had to bump this outside of recommendation levels as a result but your mileage may vary, especially if you're more forgiving of cheap stuff like that.

Highlights from the other semi from the Mexican Trios Title tournament aired. Next week, the finals.

I added a Belair/Bayley match because my daughter really likes their work. I didn't watch it in full outside of the episode of MNSM like I did the rest, but this came off decently for what it was.

The Way won the NXT Women's Tag belts in a borderline great street fight. The pacing seemed a tad off at times, especially near the end, as they seemed to rush to beat the clock, but it was a wild two on two and the title change was enjoyable enough. Candice in particular holding a championship is a nice sight as it's been 5 years or so since her last reign with a strap.

Orange and Omega had a moment, seemingly working as an initial intro for a potential Double or Nothing match. It's fucking wild to think, because ten years ago if someone had told me that Fire Ant and Kenny would main event a major PPV I would have punched them in the fucking face. Now, it's being teased and I still feel like my only logical response is to punch someone in the fucking face. Luckily for the people I see daily in the hall, I am actually super non-violent.

The show ended with a major match and a major moment.

This might have been Danielson's swan song in WWE and, if it is, it was one hell of a show. The match itself was well worth seeing and post, and the dramatic scene with Cesaro running in just for Jey to stop him and force the Swiss Superman to watch as Roman slammed Bryan with a conchairto was an amazing sight. This was my favorite televised North American wrestling match of the week and I strongly recommend it.

What a great week of action!