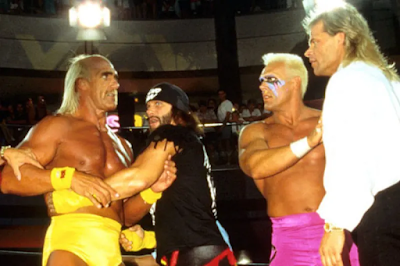 My kids enjoy watching wrestling with me and one of them was curious about a hat I wear often (it's this one) so I decided to show them the first episode of Nitro before bed time. I was watching old episodes of NWA WCW last year before dropping the idea but after seeing how much they enjoyed this, I'll likely keep this going for now.

For now, I am thinking about adding a review for Nitro episodes on Mondays. Could be fun. For special events I'll likely keep it largely to select match style reviews. It looks like the infamous Fall Brawl is coming up quickly.

So, this was broadcasted from the Mall of America with Bischoff, Mongo, and Heenan working commentary. Brian and Mongo beefed a bit as it went along. Overdone as fuck these days but at the time it wasn't completely done to death.

The opener was a match I reviewed HERE and I stand by those words and rating. It was a fun match that started the first Nitro off on a high note. What more can you ask for?

We were then "treated" to the Pastamania promo. Dear God what a train wreck!

During the second match, featuring Sting and Flair, we started with a walk up with Luger which was a huge moment at the time. I honestly enjoyed the match seemingly more than most and considered it to be a good little midcard match that served a purpose. Good stuff, even with the shit finish.

Arn and Flair have an encounter post. Then Norton and Savage have an encounter. A Sabu package is aired before Mean Gene gets to randomly tell a dude that he won a motorcycle. All of that was fine. The IRS promo package on the other hand was trash.

Main event time with Hogan taking on the Big Boss Man in one of the most generic matches of all time. Hogan matches can be that way to be fair. The good news is the fans enjoyed it and it was short so no big deal either way.

After, the Dungeon of Doom ran out to attack but Luger and Hogan ran them off. Lex cut a promo making it officially clear that he was now with WCW. Hogan then took forever to cut to the chase but finally agreed to face him for the belt.

This was WCW's move to the big picture and they truly nailed it. Sure, everything with Hogan was a bit iffy but that's almost always true. It was an hour long and pure entertainment. I'm excited to watch more and my kids seem to feel the same way.