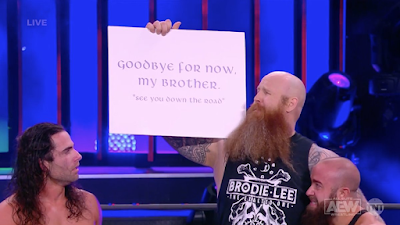 Brodie Lee's passing hit us fans hard. We mourned his death and many of us are still in disbelief. Life can be short and fragile but even so it's always a hit to see your idols and heroes fade away. I've finally gotten to the point where I am ready to watch the tribute show from AEW now, though. I held off not just because I was catching up but also because I have personally had a lot of lose in my life and admittedly wasn't ready to watch this from that stance, either.

Lets just dig in and let the tears fall.

The ten bell salute kicks it off followed by a beautiful speech from Moxley.

The first match of the evening saw Matt and Private Party take on Colt Cabana and The Young Bucks. They showed us a clip of Private Party's surprise victory over Matt and Nick from early into AEW's history before and just as I had cooled down a bit, Colt came out and I was brought to tears again. A reminder that culture has taught men that's it's not okay to show emotions. Fuck that and fuck the alpha bullshit some folks try to sale. The match was a very enjoyable way to start the evening's in-ring content. Colt brought his A-game, which was a great sight too seeing as the dude can be awesome when motivated, and everyone put in the work. Thumbs up for sure.

An intimate Darby interview was up next. A quick note, but reportedly Darby proved his innocence which is why he faced no noticeable punishments from allegations. Make your own call but I'll accept that as is unless something else comes out.

Up next, the Super Smash Bros part of Dark Order teamed with Archer, dressed in a wifebeater as tribute to Brodie, took on Kingston and his crew The Butcher & The Blade. Eddie cut a short but great promo before a great match from all six. I can already tell everyone is stepping up big on this episode! It's like when Benoit and Hart had their match but an entire episode of that level of emotion. Pimp Snake even had some fun after.

A bunch of quick chats backstage with the talent. Well done once again.

I took a break here, to have some fun with my kids and eat lunch while also giving myself an emotional break.

The next match was my favorite of the night. Not only was it a fantastic six-man, but it was an experience worth seeing. MJF was great in his role, Page his own, and Silver was an absolute god. The Meat Man kicked ass top to bottom. Hell, it's a rare example of a run in that I enjoyed. Major thumbs up here.

If that didn't have you crying again, Eddie's amazing backstage promo will.

Women's action next, but sadly the match wasn't that great and generally rough around the edges. These ladies are very talented but it was just a bit off. Still, it was far from bad and a decent match with the right winners and a nice touch of raw emotion once again. Post-match with Baker and then Rosa's attack was decent, too.

The main event was apparently handpicked by -1 which is cool. In all, it was good stuff and felt like a big moment for 10 and Hobbs which was nice. Honestly, it worked well as an in-ring end cap and was fun for what it was. After, Sting and Darby had a nice moment alongside the victors.

Cody stood in the ring for the final moments of the episode with a short but emotion heavy speech. The moment with Khan, 10, -1, Cody, and Brodie's wife was amazing and the tribute video was very well done.

As unlikely as it is that they'll ever read this I want to express my deepest condolences to Jon's family.

The IWC, as poisonous as it can be, felt like it largely came together during this week. Brodie was an amazing dude and a fantastic worker and this was truly one of the most beautiful things I've ever watched. If you skipped it for whatever reason, fix that mistake now. Just know you're going to be fucking dehydrated afterwards.

RIP Brodie. You will be missed.