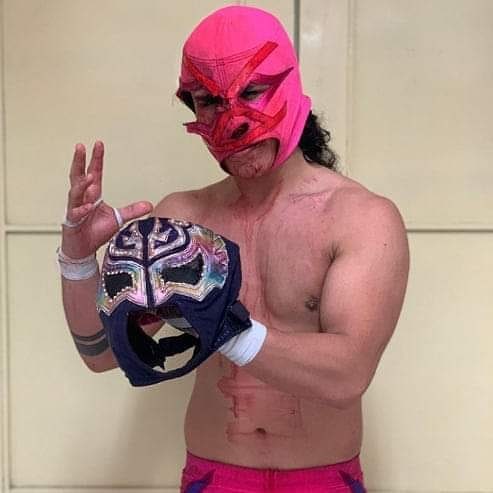 I have no idea when we'll get new wrestling content regularly again, but at least this month provided for some quality content which certainly eased the pain. Anyway, let's close this one out with some last minute pulls!

Note that while this officially closes March, some content from the weekly wrestling programs I watch may will come from the month and as a result might sneak in afterward.

Match from AAA Homenaje a Flama Roja 03/01:
1.Apuesta: Villano III Jr vs Aereo ****1/4
I recently did a throwback review of Atlantis vs Villano III. I'd recommend watching that one, even if you've already seen it, before watching this. This had tons of throwbacks mixed in and felt cinematic in nature. It was bloody chaos and a near-MOTYC that surpassed all expectations even with the iffy finish. I guarantee this will be one of the best lucha matches you'll see all year so make sure to make time for it.

Match from CMLL Domingos 03/01:
2.Hechicero, Mephisto, Terrible vs Stuka Jr, Star Jr, Kraneo ***1/2
Props to Lucha Blog for this one because Sunday CMLL stuff usually goes under the radar. It looked good so I took a bite and had a pretty dang good time with it. This was easily one of the best throwaway CMLL matches I've seen all year and something worth considering if you're looking for something a bit less heavy.

Match from CMLL Puebla 03/02:
3.NWA Welterweight Title: Volador(c) vs Templario ***1/2
Remember when Volador was one of the best workers in the world? Heck, I just put together a list of top 64 lucha talents from last decade and have him ranked in the top five because of how damn good he was. He's slowed down a lot but still has a lot of talent, of course. Templario is one of my favorite younger rudos CMLL has so I was hopeful they'd clash well. It built up decently with Templario easily working the hardest of the two for a majority of this. Pretty good stuff by the time it concluded but I might be slightly higher on it than most.

Match from BJW Ikki Tousen Strong Climb 03/03:
4.BJW Tag Titles: Sekimoto,Sato(c) vs Okabayashi,Irie ****
After watching that ZERO1 show, this was a fun watch to follow up. Daisuke and Shigehiro's encounters and Sato headbutting and striking the shit out of Yuji were my two favorite things about this one but the entire encounter was well done. Actually, my favorite thing here was the Strong BJ battle moments as this heated up. In all, this was a fantastic championship defense!


Matches from Ice Ribbon New Ice Ribbon #1029 03/14:
5.Ladder: Rina vs Sera vs Ram vs Totoro **1/4
I wanted to love this, but outside of a few moments this was very underwhelming and not nearly as good as I hoped from a match with Risa Sera involved. I might be low on it but I think I'm being pretty fair. The good news is that the two winners here will face off later to crown the promotion's first champion for their new title and the right two won.

6.ICExInfinity Title: Yukihi(c) vs Hiragi ****
This more than made up for the ladder match! Kurumi tried to kill the champ early with a nice apron spot and then ragdolled her into chairs. They played their roles very well here. Yukihi looked awesome and Hiragi stepped up big. This was a 20-minute joshi war and a fantastic match well worth seeing!

Daichi can be hit or miss but T-Hawk can bring out the best in people. I had heard this was worthwhile from a few sources I tend to trust and walked in cautiously optimistic. Good intensity throughout, with T-Hawk indeed pulling Daichi up nicely and they both turned this into a great tournament outing. This was a fun way to end the month. Give it a click.
Red's Reviews Wrestling