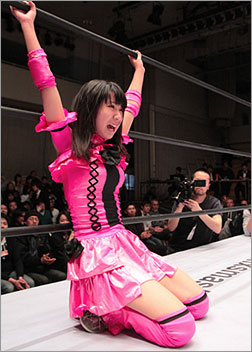 It looks like I was right, despite being a bit uncertain at the time, that Riho was indeed the partner that Kenny and Cody were watching on episode 150 of Being the Elite. I didn't get to see a lot of Omega's early Japan work and Riho is also someone I have little familiarity with despite the fact that I do enjoy joshi. She'd be the only roster member I'm not really familiar with, and that just doesn't fly.

She appears to work mainly for Gatoh Move which I don't check out often and her work in companies I do watch seems to have largely slipped through the cracks. Either way, her being on the latest episode of BTE is enough to strongly suggest that we'll see her in AEW sooner than later, and also makes me assume that we might see some mixed and intergender action in the promotion, too.

Let's take a look at the top three search results that YouTube provides when searching for "Riho vs".

1.Riho vs An Chamu
Thoughts:
This is from a March Gatoh Move show during a Japan tour they did. They are based in Bangkok for those who are completely unaware of the promotion. I've seen very little material from them, but I do know they have an interesting take on the sport, with competitors wrestling in small buildings, in a small area with no ring involved. There is a small mat, though. This makes for safer matches, heavy in grappling and some cinematic story moments and innovation.

The standout moment came from her opponent bouncing off the wall for a rear view shot. This is not to say An Chamu was the better worker, though, as she actually failed to take a snapmare properly two times from Riho. There was a unique little exchange moment in a window, and the endstretch was decent. This isn't something I'd recommend watching based on quality, but perhaps on novelty.

The match is pretty short, running about seven minutes long but Riho had a few moments that looked decent. Hell, there were even a few interesting spots from both and while I wouldn't recommend the match based on quality, perhaps on novelty? Oh, and this has english commentary if that is important to you.


2.Queen of Asia Title: Riho(c) vs Makoto
Thoughts:
This is the oldest match from the bunch, coming from late last year from SPW in Singapore. It also has english commentary.

The pace at the start was fairly quick, leaving me worrying that they'd gas themselves early seeing as the run-time was double that of the first match. I was wrong! The normal ring based format showed a much better side of her, proving that she was merely restricted in the Gatoh situation, as she displayed a high level of ability and intensity that left me impressed. Honestly, both worked hard here, but we're only looking at Riho who put on one hell of a performance. I know a lot of lucha workers that'd be put to shame by her work here, and this was an easy recommendation. I just wish it had happened in 2019 so that I could include it here.

I might have to check out SPW more often. I've only seen a tiny bit before but this earned more views for sure.

3.Princess Tag Titles: Mizuki, Yuka(c) vs Riho, Shoko
Thoughts:
Technically the third result was actually another Gatoh match, so I moved to the next result from a different company. This is from DDT's TJP brand and is from January. Her partner her is the current TJP Princess of Princess Champ, by the way.

Check the match when Shoko won the belt out here. Interesting side note, but Miyu lost the SHINE belt right after I posted that entree. Me jinxing things with blog entrees is becoming a regular occurrence.

Riho played her role well, sole nicely, and worked hard. The match was pretty good, and she did more than enough showcase her abilities. It wasn't as spectacular as the second match in this pull list, but still something worth considering and a pretty good match in all.


So, if Omega was just throwing a false tease, despite rumors that Riho is leaving Gatoh in a few months, than at worst we just checked someone out that doesn't get enough attention. At best, we had a good look at someone with a lot of potential that could likely add something fun to the AEW roster.

I hope it is the latter.
Red's Reviews Wrestling