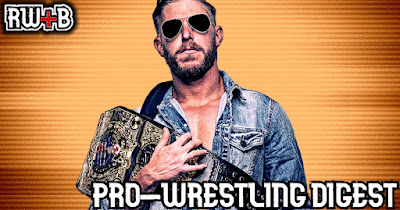 We start with Rampage content. I really am hopeful that I will, as I move along with catching up on the product, find this show actually being more relevant instead of simply being a modern Thunder. That said, this roster goes hard and can still pump out hits even during this period when the show was certainly that.

The first pull of the set, a six-man with Rush and Private Party against BCC's Mox, Yuta, and Claudio, was kind of an example of that. A good match overall, though a tad off-kilter, that showcased BCC nicely, had Rush doing Rush things, and even made Private Party seem relevant at times.

Ten and the Beaver Boys challenged for the Trios straps in the other pull from the episode. Silver has been used in fun ways but, for the most part, this also felt like an attempt at making dudes relevant that are rarely relevant as they challenged for gold against a team that is...well, relevant. Fun stuff, but the angle based finish did admittedly suck some of the energy out of this one and there were a few miscommunication moments.

Neither were actually recommended viewing, for the record, but nor were they bad by any stretch of the word.

Speaking of things sadly underdelivering while still being good range territory, we have a look at Battle of the Belts IV next.

Battle of the Belts IV Review

These events could be so, so much better with a bit more effort behind them.

This edition started with PAC defending the All-Atlantic Championship against Trent. I must have missed the reason this was scheduled or it was given very little effort behind it. The good news is that they ran with the chance and kicked the special event off on a strong note. PAC showed off, Trent showed off, and the entire thing was great.

Even the shit finish didn't hurt the overall quality much.

Orange ran out after to confront the Bastard.

Willow got her random title shot in match two and actually got some shit in and some fans behind her. It probably helps that she's the far better performer of the match. Sadly, she's a good but not great worker, but it is what it is. Jade, to her credit, has grown a lot. Anyway, this wasn't bad nor good but somewhere in the slightly above average territory. It was fun enough for what it was and kept the show moving along on an okay note, too. Sometimes, that's enough.

The champ is now 39-0. Rose would steal the belt after because...reasons.

I kind of get the main event being a thing, because Gates did get a few wins in the Khan-verse including in ROH. I also don't think I remember basically any build for this. Imagine if they actually tried harder to build and promote things. Battle of the Belts IV was seen on TV by almost 400,000 fewer people than the first such special, 200,000 than the second, and 100,000 than the third. Again, imagine if they put real effort behind these instead of just throwing things together on the fly and expecting fans to care. It's depressing watching the lack of build at times in this company.

I'm sure someone reading this will try to come up with various excuses because I'm "being too hard on the company". Of course, the fact that I cover them frequently and praise much of what they do means nothing because I'm not blindly supporting every single aspect.

Anyway, they closed Battle of the Belts IV with an distraction attempt setting up a backslide finish when they were seemingly building steam. The Embassy would then attack in post before Wardlow and Joe would make the save.

At least the faces stood tall at the end to give fans something to cheer for as it faded to black.

The opener was good shit. The rest had bits that were enjoyable but underdelivered, keeping the theme running.

Next, I move to Eh!EW's Toronto debut for a few pulls from an episode of Dynamite.

Hometown chick Renee was officially revealed as being on the AEW payroll, which is always fun. She'd bring out the hometown dick, Christian.

This quickly led into the civil war battle of Jungle Express. A major ringside table spot was perhaps the major moment in this Kane/X-Pac style angle but the two, with Cage providing a minor distraction, would trade nearfalls after before the dino would take the W.

Good shit, honestly, though I am positive it is/was a mileage will vary situation.

Next, Daddy Ass and Swerve in singles action. I'll be blunt here and admit that I had very little in the way of expectations for this one, accepting in advance that I just wanted to see it because The Acclaimed stuff has just been so fun. I wasn't blown away nor disappointed as a result of these reasonable expectations. I do appreciate the crowd's enthusiasm for a dude that's best match was in 1998.

A shit finish closed the contest itself.

The Acclaimed let Swerve walk off. Smart Mark would then come out with Nese for some cheap heat with a moment that clearly is a reference to the Too Sweet shit WWE pulled a while back.

MJF was backstage getting interviewed when Hathaway interrupted. He was shut up quickly before MJF started talking shit about BCC. He has to be a bad guy!

The champ is here next, with Mox joining Schiavone to promote his programs and position. Page quickly joined Jon. Lots of respect on display, with MJF watching on while he held onto his giant poker chip and giggled. It ended with a shoulder bump and a stare down.

Jericho retained The Ocho next against The American Dragon. The fact that Danielson is fighting for the ROH Championship in 2022 is an incredible sight. The last moments were a storyline mover shit finish, sadly, but that's what Jericho and crew are up to right now.

Garcia acted like he was there to solidify his turn on Y2J. What followed was rather nonsensical and included a borderline no-sell of Bryan's finish. This program has been hit or miss and I have a hard time believing Bryan loves doing stuff like this.

Hayter and Baker would drop the next one which was actually a pretty good tag team match. Shida and Storm were really fun here and they all gelled pretty well. The pacing in particular deserves some praise, by the way. If you're going to limit the women's division as much as AEW does at times, do this with it!

Our last Dynamite match ends the series coverage on a very high note as Orange would best PAC in one hell of an entertaining main event and take the All-Atlantic Championship. The way the Bastard sold here was magic as were the final five minutes or so, including Danhausen's pop in spot. A hammer being under the ring too is a bit funny considering PAC's continued efforts to get it while the ref was more than aware, but that's a minor issue at best if at all.

I consider this the best thing of the set, easily, and I actually loved the result, too.

One last episode to look at...

No matches got the nod here, but I did catch The Kingdom debuting, The Embassy working with them to attack FTR and Spears. WarJoe would make the save.

The post-show shoot from Spears was very touching.

I also saw Garcia solidify himself heel and Castle threaten to spray peacock power on Jericho's face unless he got a title shot.

I want to close with a look at Tony Khan's backup QB comment. The way he excused the fact that they have a bloated roster, a lack of imagination at times, and tons of dudes doing nothing as a result, is to say that a backup quarterback is exactly that. It felt tone deaf and insulting and like a sidestep.

This company can be so much more.

Excuses don't help get it there.