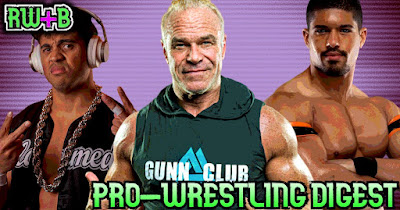 This time around we're looking specifically at the AEW Dynamite Anniversary episode from October. I'm heading back to New York today so it'll be a few days before I settle back down and posts resume. Of course, with vacation time nearing an end, it's worth noting that the sudden frequency of Digest uploads will also slow back down to a more normal setting.

MJF and Yuta kicked us off with a match that was better than I bet a lot of people were expecting. Wheeler went hard again and MJF stepped up and looked great, too. Even the post-match angle with a teased handshake and Moriarty attacking worked nicely as a cherry.

Regal, with brass knuckles, made the save to close this section.

Lethal refused assistance and lost to Darby in match two. Very forgettable, sadly, which says a lot. I literally won't remember this in a day or so. A handshake in post cemented this as being a far weaker version of the opener.

Wardlow and Cage was a fun hoss battle, at least. I appreciated seeing Brian back on TV and they went even enough that it really made this into something fun. Stuff like this is what the champ needs to grow as a worker, too.

Enjoyable TV to get us back on track!

The Embassy attacked after and Cage was pretty okay pretty quickly despite multiple power bombs. Joe tried and failed to make a save. FTR made a rare AEW appearance and this time The Embassy bailed.

The faces stood tall to end the super basic segment.

Baker had a chance to say Knight should be shipped off. That must mean the women's section of the episode is coming.

This time it's a trios match.

Knight stopped a shit finish from occurring and Willow quickly got the pinfall victory for her side shortly after. I'm surprised that she actually got the win, to be honest. Elevation tactic, clearly. In all, a good match and a decent showcase of most of the top players of the division.

Knight and Baker had a physical moment after.

A Private Party backstage moment aired that I didn't care about in the slightest.

The National Scissoring Day celebration followed, kicked off by yet another fun rap entrance from the champs. Before they were done, they had united the divided country. Swerve even wanted to play a game of paper, rock, scissors and Smart Mark was nice enough to offer his services to the tag champs.

What a historical moment! Who needs world peace when you can have Smart Mark as a manager.

Sadly, they scissored the poor dude aggressively instead.

Remember kids getting in shit back in the day for DX shirts? Pepperidge Farm remembers.

TayJay had drama backstage with Rayne and Blue.

Page and Rush's singles match was admittedly below what I expected, but still a good contest in general. Rush lost clean again which increasingly feels like a miracle for anyone that follows the dude, but he looked good in defeat. Page winning felt like a big deal, but I'm sure fans that aren't long time supporters of Rush might not feel the same way.

Private Party wanted to attack after. Mox came out and grabbed a mic while the duo watched on from the ramp instead. Jon's promo was on par for his typical AEW work, in a good way. Loads of references alongside a respect heavy selection of words to build their match.

As the artist formerly known as Dean went to leave, Page told him to get his ass back in the ring.

He has 13 days! Jon warns Hangman and leaves.

Jade/Willow drama backstage. I guess I know why we got the outcome we got in match four now, though it feels a bit random. It's also one of the things Tony does that I don't love. Willow had lost several matches, with her last major victory for Khan's umbrella being at a ROH branded event over Allysin on a preshow event. The last time she had content with Jade, she lost. In fact, she was part of the failing side of a few multi-woman matches as well as a 5 minute L for the TBS strap a few months prior.

Now, she gets a pinfall victory in a match that has nothing to do with Jade and is getting a title shot?

Christian walked out Luchasaurus. The big dinosaur quickly murdered Fuego del Sol. Jungle Boy stopped it from being worse. This set up a match in Toronto, Christian's home city, between the two former partners.

The main event continued the JAS/BCC drama, with The American Dragon and PWG World Champ, Red Death, in tag team action against Jericho and Sammy Boy. Story heavy stuff here, as expected and I especially appreciate how they handled Garcia here. The finish sucked, though.

How the fuck wouldn't Edwards have seen that belt shot?

So, this edition was a mixed bag while also doing well to represent 2022 AEW.

There were some worthwhile matches and some decent storyline progressions. There were also things that were fine in theory but didn't land. One way to summarize is that the spark wasn't as strong as it once was.

I enjoy much of AEW's product, but I also have noticed little cracks in the foundation. It's sure as hell a lot more entertaining than WWE, even under HHH, but I really wish they could figure out the small ball aspects a bit better right now.