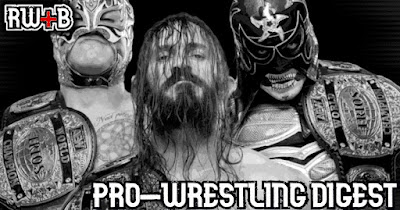 So, I'm in the middle of planning a reboot to the RW+B umbrella and have a special edition of the Pro-Wrestling Digest planned for next week. For now, let us go ahead and keep plowing through 2022 content, though.

Up first, I watched the Elevation match between Athena and Jody Threat. It's a bit funny watching how overly sensitive some pockets of fans got with their pearl clutching response to this one, because many of them likely had no issue with, say, Gunther versus Sheamus. I'll bite my tongue a bit here, but I will move past and say that I'm beyond grateful that this contest occurred.

Because Athena is back!

Jody was honestly lost here but she took the offense like a champ and, most importantly, relit a damn flame that I am beyond excited to see.

Over to Title Tuesday, we were given the show that Battle of the Belts IV should've been.

Storm and Shida was a borderline great battle for the top prize of the women's division, with drama in the post to get a major chunk of the girls of current relevance on screen. This included Baker and Knight brawling and Riho returning to kick some ass while wearing a pink skirt.

The charismatic peacock of power challenged for The Ocho in the three-spot and The Boys had some fun with Hager at ringside. Admittedly, Dalton hasn't been the same dude since fucking up his back. I can relate, having broken my own back a few years back. It sucks. And I say this not to criticize as much as to remind people that reality doesn't need to be offensive.

I also say this because it's worth noting that I sincerely admire the effort of Castle since that injury occurred. He is fun as hell and works hard as hell, too.

I'm glad he got a chance to add to this storyline and the TV time that came with it.

Anyway, the match was pretty good all things said and I dug the finish.

Jerry Lynn would eat a tombstone onto the strap on the ramp in post as Y2J continues to destroy and dismantle Ring of Honor's legacy. I'm sure that diehard fans of the brand love the way this is being booked...

At this point, I hope that there's a big invasion angle planned at some point. I will not elaborate at this moment.

The main event was a legit heavyweight fight between two workhorses that have played major roles in keeping AEW riding along nicely through rough terrain. The legit knockout finish was unfortunate, but honestly it kind of worked in a way that added a bit to the rivalry if we want to keep it kayfabe.

I also applaud MJF and Mox's time killer mic segment. It's tragically comedic and cannon fodder for a core base of fans that want to see AEW fall, but the mics cutting out sadly sucked a bit more air out of things.

Again, shit happens, though. The episode ended with pros being pros and making the best of said shit.

Props also to the roster in general. I'm far enough past All Out and all of that drama with Punk and The Elite that I can say that this group of talents stepped up big and showcased a lot of work ethic and heart with how they've handled the aftermath.

I have the benefit of reflection while simultaneously having virgin eyes to the content I'm finally watching, which is truly a fun dynamic. Sometimes, my battles with that bitch known as time have payoffs, I suppose.

I'm trying to be more optimistic in 2023. Is it coming off that way?

Lastly, I should mention the MJF/Regal segment that aired, I suppose.

MJF was on fire and I'm seriously wondering why they didn't flip the face switch on and commit to the turn with the dude at Full Gear. I'm also wondering why they held off on Red Death Daniel Garcia's turn, but to a lesser extent.

Regal was a bit stiff, to be honest, but he wasn't terrible. I just fear his section sadly took away a tad from MJF's.

In all, I give Title Tuesday an overall rating of 80/100%. It was a great show, warts and all, and a breeze to watch.