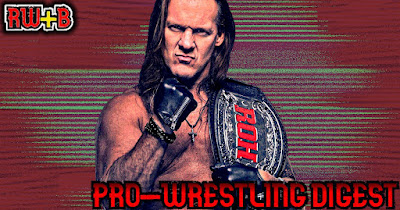 I last tuned into AEW for the Grand Slam set of shows and now it's time to move forward. This quick set looks at content leading into the Anniversary edition of Dynamite, which I'll be watching ASAP. If you want, HERE is a YouTube playlist I made featuring the content from this digest.

We start with MJF (in a Mets jersey) and Yuta trading words. A good segment overall that nicely set up something for later.

Saraya then reminded people that this is her house. Much of the division joined. It was a bit awkward and stiff.

The Jericho Appreciation Championship Celebration was fine for what it was. I'm sure this type of thing works for a lot of fans, especially ones that enjoy WWE more than I do, so your mileage will likely vary. It did set up...

Bryan versus Daddy Magic was a fun, short TV throwaway contest. Claudio even made a fun appearance and The American Dragon got another mark in the W column.

Juice got a shot to show his stuff in our next pull with an Eliminator themed match against Jon Moxley. I'm using the YouTube channel to watch these, for the record. Because of that, it's worth noting that I didn't get to see enough of the match to rate it. I see Cagematch was mixed but backstage brass was for sure impressed by JR.

After what I did get to see, which was a minute of solid stuff that ended with Mox besting the incoming talent, we moved quickly to Adam Page coming out to confront the champ. Or make out with him? No judgement here either way.

MJF was in a sky box with a mic. He, of course, chimed in. Yuta then tried his best to murder him. Failed.

Storm retained against Deeb next. The lumberjack/jill stipulation has basically never resulted in a good match and sadly this was no exception. They tried and the finish was sick, at least.

Jericho successfully retained the Ring of Jericho Championship next against former ROH Champ, Bandido. The finish was a bit weak, though leaned into Chris' gimmick at the moment, but what preceded it was pretty damn good. I'd call this great overall while noting that a better closing stretch would've made it even better.

After, Jericho promised to destroy the legacy of Ring of Honor. An attack on Bobby Cruise followed.

Even weaker episodes of Dynamite tend to deserve some praise for the effort.

Next, we move to Rampage.

The Acclaimed retained in the first pull of the episode in a 10-minute sprint against two other teams. Matt Hardy watched on backstage. Mindless entertainment similar to a Transformer film. Good but I know many will hate it, to be blunt.

Hook murdered the Ziggler brother for being a cheap heel. The Trustbusters want to recruit him.

We close fittingly with Meat Man Silver against Toro Blanco. Two dudes I really enjoy in a throwaway match on a show with basically no purpose. They went for it and used the 10-minutes they were given pretty damn well. A good showing from both and the unit chaos was honestly just entertaining as Andrade (before he fucked himself over) and crew battled against Page and Dark Order as a nice cherry.

Like much of this set, I'm sure Silver/Rush will be polarizing but I personally had a good time.

Page is making a lot of enemies.

This collection was a bit mixed but, as I mentioned above, I can at least truthfully say that I respect the attempt. If you missed any of this, I'd recommend the Jericho/Bandido match and the stuff with MJF/Yuta the most.