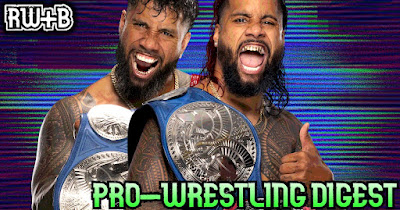 Like the last WWE roundup, I'm keeping this one pretty short and sweet with a lot of fat trimmed off.

1. We start with Riddle, Kofi, and Woods taking on Solo and the Usos in six-man action from Raw #1537. Chaotic stuff which ended with Solo pinning Riddle clean. The finish wasn't as smooth as it could've been, but largely this worked well.

Mia Yim returned on the same episode to align with The OC as an answer to Judgement Day's Rhea. The camera crew cut 10000 times a match but somehow missed Mia's initial attack on double R, though. Still, a good segment with Not the Bullet Club standing tall.

Next, I watched Seth issue an open challenge for the United States strap. Mustafa appeared on screen but was quickly murdered by Lashley. Ali tried to pull an express Jesus, but he was murdered again. The Almighty then came out and murdered Seth because...well, why the fuck not!?

2. Theory then tried to cash in. He landed multiple big moves without a successful pinfall follow up. Lashley would pull the ref out and destroy Austin setting up a near countout spot, which was fun. Seth ended up retaining shortly after.

3. Axiom continued to rock next, eventually dropping one to JD in spectacular fashion. This worked very well to showcase how fucking great A-Kid is while continuing Devlin's run of brutality. Great work in general.

JD bragged after before calling out Crews.

I caught a bit of a video with Anderson basically revealing he was indeed going to defend the NEVER Openweight belt still instead of straight up vacating it. Obviously we know more now but it's still a big deal.

4. A great tag team match with the straps on the line. They've had so many matches together at this point (the nature of WWE) but rarely do they disappoint.

5.  WWE cashed in on the fact that the FIFA World Cup was occurring and ran one of their own. This was a short sprint of both dudes just playing some of their hits in short order, with a bit of outside help thrown in for good measure.

Roman was proud of the Uso win. He tried to hold an in-ring celebration. The Brawling Brutes interrupted. McIntyre would join in on the fun and a big brawl was the result.

Seth announced a match against Finn, Lashley came out mad, words were traded. Ali then walked out and started shit.

6. It didn't last long. Entertaining stuff though, with Mustafa playing his role perfectly.

Damage CTRL tried to get Mia on their side for Survivor Series. Failed.

After, Mia revealed she'd be with Bianca and crew. Rhea would then side with Damage CTRL.

8. Hey, Dolph is alive. This time, he gave Theory something to do this week. Austin would snap, eventually getting disqualified. A nice display of fire following the events of the week before.

9. This one had nice throwbacks and was simply a strong TV main event. With Roman's stranglehold on the top prizes, they're trying to elevate the US belt. It's an uphill battle against past treatments, but Seth is the right guy to do it. A borderline great defense here, indeed elevating the belt a bit more.

10. JD's run of terror came to an end and Crews was given something to do. Great stuff with quality athleticism and tons of fun back and forth counter wrestling on display.

Sheamus and crew are in the ring with Drew, promoting their alliance. The 5th member of their team is teased. Sami interrupts, confidently, promising victory.

11. Ricochet defeated Ali in a pretty good World Cup match while recipes were given on commentary. WCW Cruiserweight style stuff.

Knight slapped Bray. Twice. They are now not even. LA was later found dead backstage under debris.

12. Chaos. Entertaining, but chaotic. Dunne would take the W thanks to...well, the chaos.

The two units would brawl after, with Roman coming out to clear house thanks to help from Bloodline. Eventually, KO would reveal himself to be the 5th man. In all, this was a storyline heavy match and post-match segment and I loved every second of it.

Brawling Brutes (with KO and Drew) are confronted by Judgement Day. An impromptu match is set up as a result. A weird choice, but it would be a lie to say I don't love the idea of a match between the two sides.

13. It's rare that WWE puts on something...well, for lack of a better word right now in my sleep deprived state, fresh. This was that, though. A fun opener with both units gelling nicely. The OC watched on, adding nicely to things. It was a bit weird seeing a SD team come to Raw and best them, but the brand split is largely meaningless and it's hard to care much about WWE booking choices these days.

I gave up on that years ago.

After, The OC got involved and KO hit a stunner on Finn.

Upon reflection, this reminded me a lot of something you'd see at a house show.

14. Austin kept his angst in tact against Mustafa in our next pull. There was some miscommunication here and I'd be lying if I said it couldn't have been far better, but there was some meat here and it worked more than not.

After, Theory mocked Lashley. The captions on YT were suggesting that Theory was telling us how to cook meat. I'm thinking that previous World Cup match didn't actually have commentary giving us a recipe. I also know it sounds very much like something WWE would do so I'm going to head cannon it into reality.

I mean, does it not sound plausible that WWE would have their commentary crew talking about food an entire match while Ricochet and Mustafa are in the ring?

I could post thousands of these screenshots and they're all awesome...

Then, the women's WarGames teams would have a moment ahead of an advantage match between Asuka and Rhea.

15. This was a good main event. I'm confused why Bliss and Bianca went backstage to watch, then returned to ringside, though. Whatever, good stuff ultimately with Rhea wisely getting the nod.

16. The only thing from NXT 656 I caught was this, which saw Wes Lee defending the NXT North American Championship against Hayes. It was every bit as athletic as you'd expect and I appreciated the clean finish. NXT might not be the same these days, but stuff like this will keep me coming back.

Dijak returned after to destroy the champ.

One more to go...SmackDown 1214. A Thanksgiving themed edition.

Becky was announced as the fifth member of Bianca's team for WarGames and the two sides brawled. The faces stood tall in the end.

17. This one was very WWE. The two worked hard to try to make it work, but backstage drama and interference based shit finishes kept it from being too much of anything noteworthy.

18. Ricochet beat the big pile of shit thanks to some distraction help from Imperium.

Prince Puma would help that same big pile of shit after.

19. Chaos at ringside. Kevin and Sami even had a moment. KO would eventually help Sheamus and Drew win the match and gain advantage at WarGames. This reminded me a lot of stuff from the Ruthless Aggression period. Fun, circus act stuff and a pretty good experience overall. Your mileage will vary greatly.

Oh, and the 24/7 Championship was thrown in a trashcan during this review period.

This wasn't trimmed down as much as I thought. Oh well. The Usos/New Day tag title defense on SD was my favorite thing of the set but there was some fun to be had. I'm excited to see Survivor Series, though I admittedly wish we would have gotten an actual Survivor Series match on the card.

I love WarGames matches, when done right, and both look fun and had some solid build. The stuff with the United States Championship was entertaining, too. Props too to the JD stuff on NXT, much of the World Cup on SD, and even the Bray/Knight stuff was okay.

Thanks to anyone that read. I hope everyone's holiday season has been awesome!