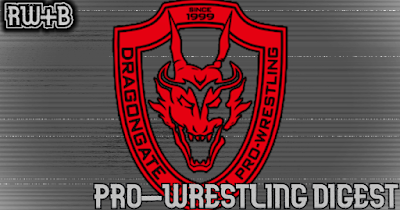 A span of three episodes from the past three weeks of DG's Cutting Edge Battle!! have covered the recent Gate of Destiny show, which I admittedly had a lot of interest in. While this year wasn't as strong for the company as I had hoped, this is still the most adaptive promotion in the world, always willing to progress forward and experiment.

It might not always land perfectly, but I respect the effort.

1. Eita and Fujiwara Takuma kick us off. Takuma has been very impressive as a rookie and has been turning heads around the world. Eita has really smoothed into his role and, thanks to the nature of DG, is a dickish vet at this point.

What followed was a pretty decent, competent singles match with Takuma selling decently and Eita eventually putting the 20-year old down. Short, but good and more evidence that Fujiwara is a major bright spot in lucharesu's future.

2. Next, closing the episode, we have Dragon Dia and Madoka Kikuta taking on Big Boss and Strong Machine J. The challengers were a force, overpowering the champs easily for a majority of this eventually setting up an underdog spark and a well placed piledriver finish. The champs retained and the outing was pretty good overall.

This one wasn't really must-see TV, but it was an entertaining half-hour for what it was and served nicely as a showcase of DG's future for those that care.

It's time for the next one, which looks even more stacked than the one that preceded it...

3. The Child of God continues to be ageless and here he wanted to show H.Y.O. how a champion is supposed to act. Instead, the young Z-Brats heel would do his thing and retain in slightly dirty fashion. It was simple, but sweet. Great work from both, mixing story and action nicely.

A clip of Ishin joining M3K aired in between.

4. The main of this installment saw KAI, Ishin, and Skywalker dethrone the Mochizuki tribe. Ishin, having just joined M3K previously, exposed himself as Masked Z to start this which was a nice touch.

I wish my Japanese was better. Big Boss on commentary just sounds so fun but understanding pockets of a language isn't truly understanding anything in practice.

Anyway, this was a great six-man with a lot of story tacked on. I thoroughly enjoyed it and consider it evidence of how excellent DG is at the basic things.

We end the set with a Dream Gate defense. Fuck yeah! This one actually debuted this morning, for the record.

5. This is the second time this year that Yuki Yoshioka has beaten YAMATO this year, with the first being during the King of Gate tournament. A lot has changed in those few short months and the D'courage member is now officially set firmly in the main event scene.

The Almighty Battleship was great here, like usual, and played his vet role nicely, challenging the younger champ in a way that would truly help ensure that this run wasn't just a back page story. A strong, slow burn pace with calculated moves throughout. Also, I have suggested a few times here today that DG is a place that always tries to adapt and evolve. This has been true for basically the entire run of the fed and it's especially evident here, with a new era always pushing forward.

Yuki has found his mountain top and it's good.

This was a fantastic match and a strong way to end the collection. Gate of Destiny was honestly fun to watch (via CEB!!) and I recommend fans take a moment to check out some of it. At the very least, consider the latest episode which was the best of the bunch.