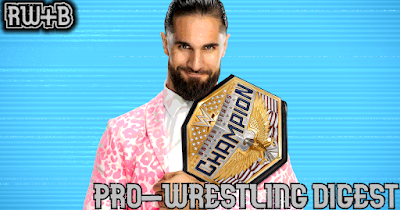 Lets run through this one super quick so that I can finally catch the fuck up. I'm not watching Crown Jewel, for the record.

I didn't watch a lot of the non-wrestling shit from the period, but I did catch a few things.

1. Axiom/Frazer III was a fun conclusion that kept the energy of the first two and ended in a way that left the door open for more. This series of matches was one of my favorite things NXT has done in a while.

2. An IC title number one contender's fatal four way? Yes, please! This one was basically a chaotic spotfest to introduce Rey officially to the SD roster (not that the brand split actually means anything). Everyone got some spotlight on them before Mysterio took the W. Entertaining TV.

3. Another match between the two, this time with the United States Championship on the line. They found a bit of magic at Clash and the encounters that followed were, while lesser, pretty damn entertaining in varying levels. This TV title defense worked nicely. Mustafa would make the save in post and run off the champ.

4. Yeah, this was an awesome car crash spotfest full of insane, high speed action. Ladder matches should be exactly like this in 2022 and I give props to all involved.

5. Bron is still growing, but has been fun enough as champ and fit that 2.0 concept nicely. He's clearly got a nice role in 2.5, too. JD and Ilja did great work, like usual, which helped elevate this one into MOTYC territory. A break neck battle of wills that used the three-way stipulation pretty damn well. Everyone came off looking awesome here and Bron retaining didn't feel like an insult. Watch this one ASAP if you missed it.

6. The numbers game was a big part of this, with Damage CTRL getting involved often. It was a circus act chaos heavy outing that ended when Cross ran out and fucked shit up. Good for what it was.

7. A very good singles match heavy on story that works well as a follow up to the triple-threat Halloween Havoc outing. JD left Ilja bloodied and defeated on the mat.

8. Great David vs Goliath content here with Rey being Rey and Gunther being the fucking monster that he is.

9. Yeah, this was far better than expected. Theory really shined nicely and Seth put in the work to make this TV throwaway something when it would've been understandable if it was...less. Very good content.

10. A surprise outcome and a very good tag match that did well to spotlight the Raw women's division. A nice way to close the set too seeing Bliss and Asuka holding gold to close us out.

Honestly, I had a lot of fun with these ten matches. The production will forever be an issue and WWE is truly always sports entertainment first, but I'm sure most fans would have something to enjoy with these.