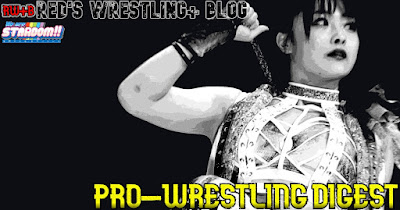 A heads up before we get started, but life can be a chaotic mess sometimes. After just having lost my father in law, I have now also lost my mother in law. As a result, content has continued to flow at a slower pace than I typically would like. I'm sure you, the reader, are understanding of the circumstances. If not...fuck off!

We start with content from episode 132, which you can find right below these very words. This edition features ten more matches from recent editions of my favorite ongoing wrestling series. Sit back, grab a beer, and enjoy some badass joshi content!

Up first, KAIRI and Tam took on Queen's Quest's Amasaki and Utami. While a bit clunky at times, largely due to Miyu's greenness, this had a bit of decent drama and some solid action. It feels as if Hojo has lost a step or is having trouble breaking out of her WWE programing, though perhaps that's an unfair criticism. Tam and Utami, of course, were the shining stars.

Next, from the same episode (and event), we have the Artist straps on the line. Very good, quick paced content here though not necessarily as smooth as I had expected. Several good stretches and a nice finishing sequence ensured it was still pretty good overall, either way.

Mayu and Fukigen Death's SWA match saw the heel clown start quick. Before I say anything else, though...

What the fuck was that?

Anyway, this one was comedy leaning while still featuring some solid, quickened in-ring action. Decent and I am sure some might even like it far more than I did.

Saya's defense against MIRAI certainly deserves a look and is the best match of this set thus far. While I had no expectations for a title change, they still worked hard and put in for a highly enjoyable and well worked battle. Great shit.

SLK came out after.

The next episode kicked off with the sole pull I had from the installment and it saw the final contest that I had decided to check out from the Flashing Champions event. Flashing Champions was one hell of a show, people. I watched almost everything from the event (via WaS!!) and had a blast. Perhaps the best STARDOM gig of the year, which is a high bar to step over.

If you can't tell, I am meaning this to also praise Syuri's World defense against Risa. The two had a strike heavy brawl that didn't stay contained to the ring, with both more than willing to beat the fuck out of each other in their main event slot. Note that there was some interference work, which shouldn't surprise most fans of the company knowing who was involved, but it didn't really take away anything and instead truly added to the drama in a positive way.

I not only have enjoyed Syuri's reign more than expected, but I continue to be overjoyed at seeing Risa get the chance to break out from her previous basement position.

A side note, because I am sure certain readers might be now willing to run away due to the past sentence, but I really do appreciate and respect Ice Ribbon. I love joshi and the smaller feds are really fun. I also know that Risa was an ace level worker and that there was no way she was getting paid enough previously. STARDOM has their issues, but she's now on the biggest stage she can be on in Japan and I love that for her.

I'll be watching the 135th episode in full now, because this installment looks awesome.

Tam and Natsupoi went to war in this edition of We are STARDOM!!, ladies, gentlemen, and nonbinaries. We started with a damn cage match, which I was beyond excited for. I love both of these workers and joshi cage matches tend to be insane. They maintained a decent intensity level throughout and kept things pretty smooth without feeling over-polished simultaneously.

After Tam's victory via escape, the winner went back into the ring for a brief, emotional moment.

A rematch aired as the other piece of content on this episode, this one being a more standard outing. Do not mistake that choice of words as being an insult, though. While below the quality of their cage match, it was still a borderline great outing and a nice bounceback win for Natsupoi.

Overall, this episode was focused and fucking rocked (like most episodes).

Episode 136 review time? Sure, why the fuck not!

This one started with a very good elimination contest for the Artist straps. While a bit overdone and unfocused, I still found myself appreciating this. There was a far better match somewhere in here, too.

Ever see a game of paper, rock, scissors on top of a cage?

The unit cage match was fantastic stuff and a nice companion piece to Tam and Natsupoi's outing. While I honestly thought they underdelivered on expectations, I still enjoyed this heavily. That's just how high the bar was considering the talent involved. Worth a watch whenever you have a moment!

This one was a bit below the overall quality of 135, but still a great half-hour of content regardless.

We close the set with another elimination match, this one seeing Cosmic Angel's Tam, Mina, SAKI, and Unagi taking on DdM's Giulia, Natsupoi, Sakurai, and Himeka.

Coverage started hot with eliminations flying off the frying pan immediately. Tam and Nat's rivalry, of course, spilled over into this one as a showcase, but there were other callbacks to be had as well. By the time we were truly settled down for the match, it was down to SAKI and Tam versus G and Nat and shortly after we had a handicap stretch with Tam energetically fighting from below. A stunning betrayal that I do not want to ruin (for those that also watch from behind etc) closed this and gave Cosmic Angels the W and a new member.

Mileage will vary, but this was pretty good stuff overall in my opinion.

This set was loaded with fun stories and quality content. Check out anything that sounds fun to you and thanks, as always, for reading!