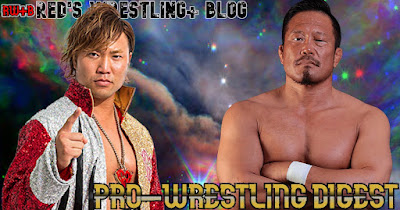 This time around, we're looking at some puroresu that I missed out on. Kento is a major player here simply because he's so fucking good. Note that by the time you read this I will likely be on the road again back up to New York and away from the awfulness that has been the best two months.

Up first, a title match against T-Hawk. After their 2021 contest struggled to live up to expectations, they delivered big on the occasion this time and put in for a hard-worked bout worthy of the circumstances. I strongly recommend this one and love that we're already off to such a strong start to the set.

Next, another chapter in one of the biggest ongoing feuds Japan has to offer! Jake Lee besting Kento was a big moment here and the contest landed well. Fantastic stuff with Kento working from underneath right up until the moment he just couldn't push forward any longer. Thumbs up!

The Royal Road finals saw a rematch between the two. Great, though perhaps a tad below expectations set previously. Their battles don't always hit the levels they should, I suppose. Still, I'm complaining about a great contest and a strong tournament final simply because of how talented these dudes are so that's something I suppose. If you want a quick, under 3-minute look at some of it watch the video above.

Suwama came out for a stare down after.

Last from AJPW, we have Kento and Nomura in a top shelf contest. A side note, but I couldn't help but notice a fan in the crowd was wearing a Jets hat. The world is a huge place, but I am a big fan of the team (it's an abusive relationship) and I also loved seeing that. If somehow you end up reading this, presuming you can, hit me up.

Anyway, outside of that strange request for friendship, Nomura and Kento put in for another enjoyable contest. The company might be far from their glory days, but these two along with Jake Lee are so fucking good that I am sure to return time and time again.

I'm starting with an Abe match because the dude is far more talented than he gets credit for and continues to be one of the best juniors in the world. I've seen Shoki only a handful of times, for the record. Here, they both worked a nice, focused technical battle that really played out nicely. The flash pin even worked well considering the circumstances, though the post-match attack out of frustration felt a bit wonky in execution. A minor quip either way and irrelevant to the match quality itself.

Next, a series of two matches between Tanaka and Sugiura! Apparently these are only the 4th and 5th times they've faced off in singles action. The world might explode the next time these two titans face off so be prepared for that before digging it.

This one served as a nice reminder that vets of this caliber don't care if they're working in front of a small crowd for a promotion many don't even know exist. They stepped up, like Syracuse's football team has this season, and put in for a fantastic title match. I'm fairly certain these matches will fly under the radar of many wrestling fans but I encourage you, whomever you might be, to go ahead and not make that mistake.

Fantastic representation of the genre, building from a slow burn into a full blaze!

The ageless battle of puro icons continued later in the year, this one occurring the 4th of June. Somehow, they delivered an even bigger and better match with this one and they upped the intensity level nicely to make it feel like a real sequel.

Big shots and table spots, this was a MOTYC well worth your time.

I urge readers, as suggested above, to watch both. If you only have time for one, check out the latter. Quickly!

I close with M-Pro content. Note that we need to cover some shit first, though.

First, I really wish this company was worth watching more often. There are loads of awesome matches in the back catalog and they're simply a fun place. They just don't put out enough shit that I feel is must-see to cover them more.

Second, this is the first match Hayato had worked in years and it just happened to take place in K-Hall.

I always appreciate good writing and love to spotlight that sort of thing when I can. As a result, I think THIS deserves a plug here. Read it AFTER watching the match. I was going to basically write the same sort of thing, but I enjoyed this write-up and think you will, too.

Simply put, Hayato's emotional return tied in nicely and both men worked very hard to provide us with one hell of a contest. Some sources you expect excellence from, others just occasionally happen to house hidden gems. This is such a gem and I applaud Hayato and MUSASHI for making me care about the belt for the first time in what feels like forever. A MOTYC!

Check out anything that catches your eye, but prioritize matches 1, 4, 6, 7, and 8 from the list below.