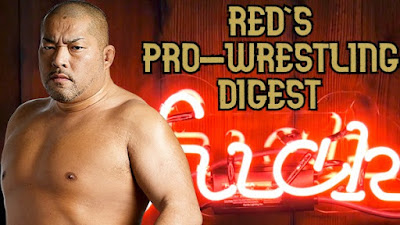 Welcome back for yet another Pro-Wrestling Digest, folks. This time around I am watching even more New Japan, I'm catching up on missed WWE content, and I'll stop in for some CMLL, IMPACT, and AJPW, too.

Before we get started, here are a few full show review posts that I've added since our last digest:

If you're wondering why I didn't watch and review the latest AAA Worldwide, it's because the episode only featured the two dark matches and I had no interest in wasting time on either.

First up, SHINGO and Taichi worked a 30-count rules match for NJPW's little trinket trophy. The gimmick shouldn't have rocked this hard, but if did thanks to the competitors involved. It sounds like something TNA would've done with JJ versus Raven or something. Anyway, they worked hard and made this a fantastic contest that finally added a bit of value to the King of Pro-Wrestling plastic.

EVIL and Tama continued the GOD/BC angle. It had some good moments and the overbooked finish looked decent visually. The change was a nice move, too. That's about all I have to say about it as it didn't do much for me in the end but was ultimately good simultaniously.

Despy and Ishi's title match was great, but admittedly underdelivered for me. The work was quality, but I am well aware that the two are capable of far more. The result was nice, at least.

Ishii and Tanahashi was fantastic content with the two putting on the type of strong performance you've just come to expect. Tana winning was fine considering the Capital Collision content that we got and clearly it was just a filler reign anyway.

Chase Owens came out after.

The main event of Dontaku was yet another MOTYC featuring Okada and Naito. I will literally always be rooting for Tetsuya to hold the top prize, but Okada is so ace that I'm fine with the reign continuing. Counter wrestling dramatics and longform storytelling, folks! Make time for this one.

Speaking of Capital Collision, I have two noteworthy matches in my grab bag.

First, Ishii and Eddie put in for a fantastic clash that felt like it belonged in the 80's. I truly enjoyed the build and pacing work here from both and would absolutely love a repeat.

Second, a spotfest four-way for IWGP gold. Bullet Club's newest member, Juice, deserves a lot of credit because he had many thinking he was retiring or moving on and instead he revived his career and immediately won gold. New Japan clearly has faith in the dude and the new direction and I'm all for it, too. The finish was as chaotic as the match that lead up to it and included yet another Ospreay-conspiracy storyline building block for good measure.

Next, a CMLL trios match.

I actually like the new Ingobernables and I thought this was a very good CMLL style outing in general. The six pulled out a lot of the big spots you'd want from a big Arena Mexico Friday night contest and I had a lot of fun along the way.

To WWE we go next, starting with two from the UK brand that you just know Vince forgets about frequently.

Ilja and Roderick was great TV and yet another example of why this is WWE's most enjoyable brand currently. ID is the perfect champ for the place NXT UK is currently in and Strong was a nice throwaway challenge to pad his resume.

Moustache Mountain's defense of the tag straps was great, too. They hit the gas early and the drama was decent. A stronger finish would've been nice instead of the story dipped one, but that's fine considering it means a rematch.

Over on NXT standard and we have a three-way for the North American Championship as our first pull from Spring Breakin'. It overdelivered for sure and was great in general. Grimes with gold is always a nice sight as it reminds me of that awesome CWF Mid-Atlantic run he had.

Frazer and Waller was good, but a circus act finish and a few minor issues held this back from being anything more.

Bron versus Gacy was sobering and disjointed, making for an entirely forgettable title defense. The Steiner kid continues his reign, but this one certainly did nothing to make me care. NXT 2.0 has a purpose, but the delivery remains hit-or-miss.

Last from WWE I had Cody versus Theory with the US strap on the line. It was decent, getting good, and ended with a DQ as Seth ran in to cost Rhodes the match and, presumably in kayfabe, the belt. Meh on its own but okay I suppose as part of the ongoing storyline.

Yuma, having won the Champion Carnival, got his shot at Kento and the Triple Crown in our next pull. Check out a review post I did on the tournament HERE. The fact that All Japan is basically just a super indie these days is rather depressing but at least there are roster members like these two, one of which I consider a top five worker, putting in for epic encounters on the calendar. This was a MOTYC and one such encounter. Diehard fans of the art like you, the reader, and myself will continue to come back time and time again for that simple reason and I urge readers to indeed make time for this one.

We'll close with IMPACT content as I catch up on the product. Much of what follows is from the Under Siege event. I sadly couldn't find time to watch the full gig, but what I did see continued the enjoyable trend this roster and crew have been establishing.

The pre-show featured an X-Divison three-way that worked really well to kick things off. I honestly don't know if the company understands the buzz Speedball has right now. The good news is that this reminded me a lot of the golden era of TNA's X-Division and I can recommend it rather easily. Great shit!

Maclin and Sabin was a ride, building up as they went along with the drama rising as the minutes added up. In all, it was a fantastic battle of wills and a high quality throwaway. Maclin continues to impress and is growing organically in a way that has loads of potential.

The X-Division Championship defense was a bit shaky for a period near the finish, but the work before and after was pretty well done. Borderline great! Ace is so fucking good and has a great attitude, by the way.

Honor No More and Bullet Club continued their angle next. While this didn't all land as well as it could have, it worked more than it didn't. Just enough to hit recommendation levels, though mileage will vary.

There wasn't much fancy about The Briscoes versus VBD, but it was a fucking trip regardless. It started with a brawl before the bell at ringside, kept a nice intensity throughout, and just felt like a big deal overall. Jay and Mark winning the gold was a nice sight, too. They instantly made the division even better and the promotion is increasingly feeling like a competitor for fed of the year.

Speaking of, the last Under Siege pull saw Ishii challenge Alexander in a throwaway for the brand's top prize. Moose came out beforehand to cut a promo on his situation. Callihan returned to shut him up and to move the big man away and into a new program.

After, we finally actually got to that defense I had mentioned afterwards and. it. was. fantastic!

Both men displayed their abilities nicely, providing for a match that served as a showcase for the workers, the belt, and the company. Ishii and Alexander are elite level workers and it translated in HD to the screen in this one.

Make time for that one, folks. MOYC!

Last up, a handful of content from their TV product that followed Under Siege.

King versus Bey went for a heel work, protection finish which sucked the air out a bit, but in general made for a pretty good contest that served as a storyline building block as well as a qualifier.

Alexander and Ishii versus Bullet Club's White and Phantasmo was very good, tag team content. It felt a lot like something that would main event a NJPW Road to show, in a good way.

EY won a Gauntlet for the Gold, which felt like a really weird move. I didn't watch it.

Bailey and Laredo Kid was a very good spotfest that still underdelivered. I had higher expectations considering the names involved. Still, very good, though.

The issue with the two qualifiers is that I wanna see all four of these dudes in the Ultimate X match instead of half of them, by the way.

OGK versus Bullet Club was something I figured would either be a surprising match that overdelivered or something that just kind of happened. Sadly, it was the latter. That's all there is to say, really.

Last up, we had a good one with The Briscoes giving VBD a rematch. They slid EY to the side here and added in some build for EY vs Josh. I'll admit that I was hoping for more, but as a building block it worked.

Thanks, as always, for reading. More to come.