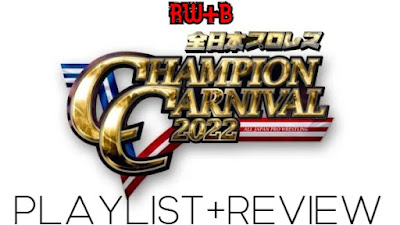 It's time for a tournament playlist review post? Fuck yeah it is! This time around, I'm looking at this year's Champion Carnival from All Japan and we have four videos.

Up first, we have action from night two of the series.

The tag match was clipped down heavily with not enough given to rate, but it came off fine. Some brawling backstage followed. This was followed up by T-Hawk and Ishikawa. Again, too little was shown to rate but it looked like a good match that didn't break out of second gear by much. Shuji won with a press pin. Nomura won the next one, putting down Yuma. The theme remained, but this for sure looked like the MOTN.

The last match of the set finally broke the trend, giving us enough meat to truly enjoy one. Luckily it happened to feature Suwama and Miyahara. The two worked a 30-minute draw and what ran was pretty good shit. They're both capable of far better, of course, but I had fun.

After, Kento refused to shake Suwama's hand, instead opting for a boot to the face.

In all, this was rather entertaining stuff even if I had higher expectations.

Moving along, we head to night four for our next video.

Kento and Nomura kicked us off with a fantastic battle of wills. These two are a big part of the reason why All Japan remains a worthwhile product with a bright future and this served as a quality example to support that stance. This time, Kento offered a handshake in post but was slapped by Takuya.

Irie and Lee, what was shown at least, was good stuff with the latter going over. The visual of him staring down as Irie looked up following the pinfall victory was a good one.

Last, Honda fell to Shotaro when the latter locked the former into an ankle lock. It was clipped down too much, but had a decent intensity about it and the right dude won.

Up first, Irie hit 4 points following a victory over Honda. Less than a minute aired, but it was entertaining nonetheless. Yuma bested Yoshitatsu in another quick one after via a protected, flash finish. Up third, two big dudes doing big dude shit. Like the others, this was too short to say much about but Shuji got a clean win and it looked pretty decent while simultaneously staying below expectation levels. We closed with a few minutes of Suwama besting Kuma. Like the rest of this one, it was fine but didn't come off as being must-see in any form.

Lastly, I added the official AJPW YouTube channel video that saw the closing minutes and aftermath of the finals to the playlist. I went ahead and broke a rule and included the full match, uploaded by a third party channel, to the playlist.

I broke my rule because All Japan is seemingly in a down place right now once again. Maybe that's not a fair take, but it's my perception regardless. They have a service that I've heard works decently enough if you're interested, but I felt that perhaps including this might help an extra eye or two onto the product.

While non-AJPW fans will likely see this as a finals match with no stars, I follow enough to understand the future ramifications at play here. Jake Lee and Yuma are major parts of the future of this company, after all. That this was of such a high quality serves as another reminder that AJPW still has steam.

All Japan is, of course, far off from their glory days but I know I've personally still come to expect a certain level of quality to be present. This, being the Champion Carnival, I was obviously expecting this expectation to be met without issue. Instead, I watched about 2 hours of content from the tournament and I feel that the tone and general quality didn't deliver outside of the finals as well as Kento versus Nomura. I am not aware of backstage drama or changes that might be causing such things, but as a fan I really didn't feel as rewarded as usual and that's an issue considering the circumstances.

Maybe I should have been more selective when pulling content, but I shouldn't have to feel that way for choosing to watch more instead of less.

The roster has a lot of talent. They didn't come off as strong as usual here and I could argue that this lessened the impact of the finals to a degree. There are also loads of promotions running and putting out constant waves of new content. AJPW cannot fall behind as they are still trying to regain footing and relevance.

I'll, of course, continue to check back in from time to time but I'd be lying if I said I felt as motivated as usual to do so right now. Perhaps if they'd start a weekly series similar to what Wrestle-1 used to put out...

Anyway, watch what you want and thanks for reading, as always!