Hey, ladies, gentlemen, and nonbinaries, I wanted to take a look at 2 Mania weekend special event matches and thought this might be the best way to do so. It felt like the best way to kick off content for my return. I am not including normal TV stuff, like Dynamite content or whatever, and I am only pulling matches specifically taking place near Mania as part of the weekend of events, so nothing that happened in Japan will be showing up here.

I certainly started this set on a high note, as this was a banger. Bandido hasn't seemed to have been at the same level since his COVID issues, but this was him clearly stepping up nicely as he faced off with Speedball. Bailey, for what it's worth, is also a dude I really like and have been following for years.

I try to take in as much of his content as possible is what I'm saying.

Here, both worked hard and gave us a fantastic throwaway Mania week spotfest.

Next, another high quality contest, this one seeing IMPACT's Josh Alexander, Ace Austin, and Black Taurus taking on Laredo Kid, Rey Horus, and fucking rising star Oku! Like the match I just covered, this too was a high octane spotfest and wildly entertaining stuff in general.

Here's a clip I found on YT from the match:

Check this one out, in full, when you can. I'm thankful that they mashed these six up so randomly because it was a nice showcase sprint.

I then watched two from the latest Bloodsport gig. 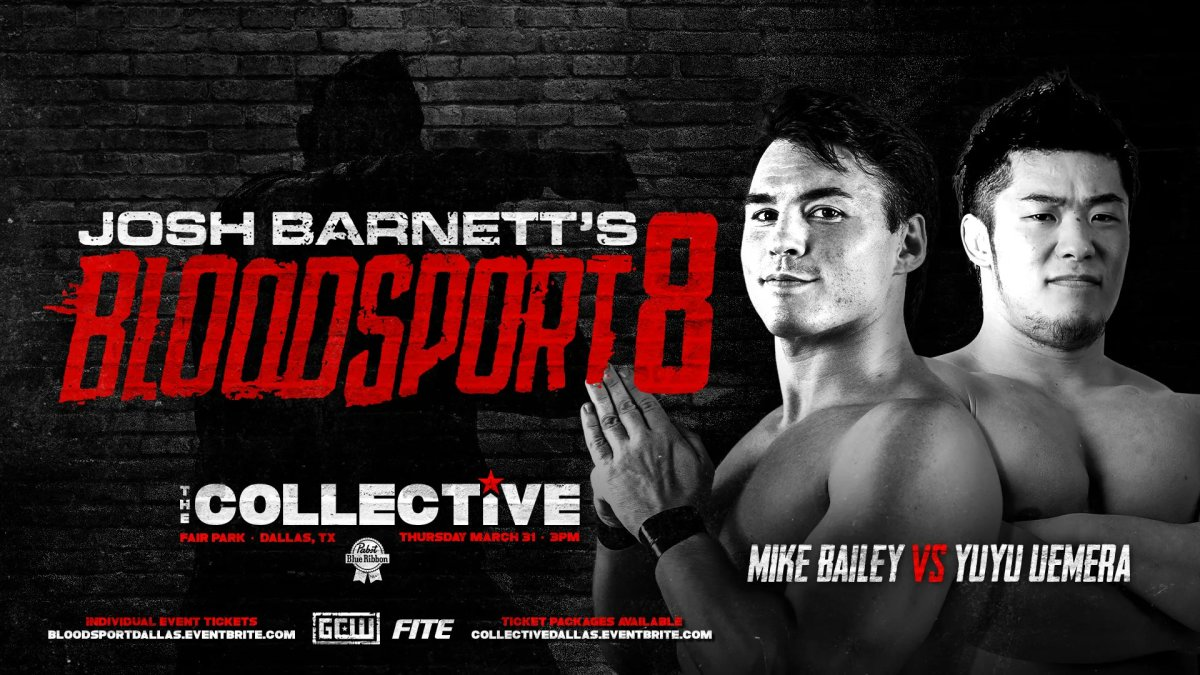 First, Yuya took out Speedball. I dig this shoot leaning, UWF style of action and thought this one was pretty great in execution. Uemura works the style well and Bailey played his part rather well. Your mileage will vary, but I consider it worth considering. 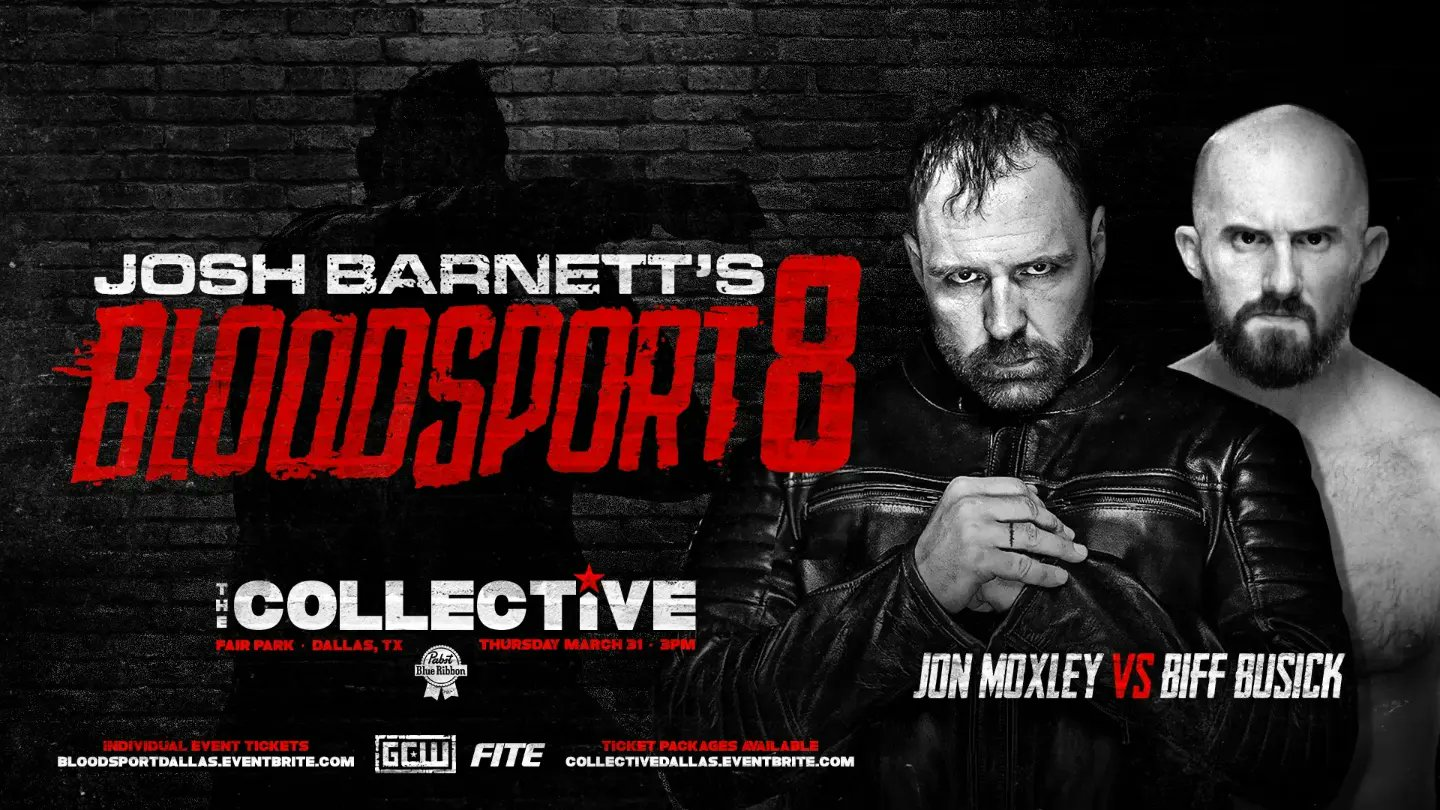 This one, on the other hand, is simply a must-see battle. They leaned into the violence and it provided for a bloody clash of wills. Jon, of course, was excellent in his role, but Biff looked like a renewed spirit. He had glimpses of brilliance on his indie run prior to joining WWE. Under Vince's tail, he still had some moments, but never hit that level as a performer that I had expected. I'm thinking we're about to see him finally hit that level, if someone will give him a platform to do so.

MOTYC level, folks. Click play as soon as you can.

Next, we had Jay White and Speedball from New Japan's STRONG outing during the festivities. To keep shit simple, this was simple. To not, it was two top shelf talents putting in for a competitive and entertaining wrestling match that had very little weight to it yet felt far more important than it was simply because of how hard they worked.

If you get what I mean.

Moving along, we get to Ring of Honor's first show under KHAAAAAAN!

I went ahead and watched this full show and posted the review HERE.

The Ultimate X match was fairly good, but underdelivered for sure. It felt far too formulaic and did little to step up the stipulation nor to add anything new nor of value to it, either.

Shelley and Bailey had a fantastic battle, though. Alex has been looking great again of late and it's awesome to see it. I'd like to see him versus Christian soon. Props to Bailey for his side of the effort for sure, too. Quality throwaway stuff.

Ishii and Edwards, presented as NOAH x NJPW, was pretty good. Could it have been better, especially considering the names attached? Yup. But they did well enough with the time to give us something I'd call an Americanized representation of the general puro genre. 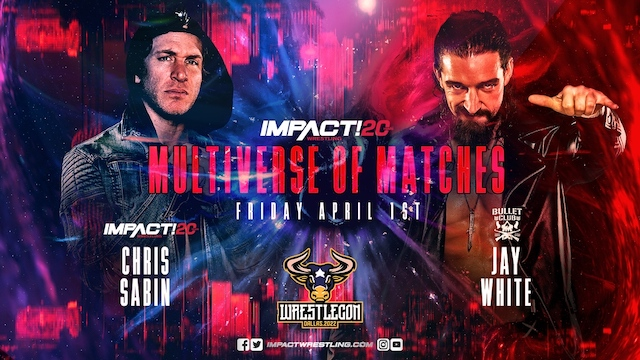 Sabin and White was my last pull from the set and a great contest overall, continuing their little ongoing program. Sabin, like Alex, has been performing at a high level once again of late. White has simply continued to grow wildly past what most thought possible since the day Kenny left New Japan.

Once again, IMPACT put in for some quality content that far too many will be ignoring. The first was a good ladder match with Grimes and Escobar serving essentially as pillars. The younger crew did decent enough and the bigger spots and decent bits of drama helped put it this high, but just barely to be clear. The flaws were many and it was rough around the edges, still, as NXT continues it's new era of philosophy. We close the show with Breakker falling in his rematch with Dolph. It was indeed a bit overbooked and Bron was indeed still a bit green. If NXT was still in the form that it was a few years ago, this one would have just been a TV main event. Instead it was a fairly good, but largely skippable, title match.

Mania time. This year's two shows had seven pulls from me which feels like more than in years. Becky and Bianca kick things off and I thought it was a truly fantastic championship match. They worked hard for sure and my kids loved every second, too. The pacing and drama really made this one special and I easily recommend it. Next, Cody's return to WWE to face off with Seth Rollins. The build was a disaster from a storytelling standpoint, but the payoff was enjoyable. I see the deflection as a mistake, but with the baggage cleared and all of that shit, this was simply excellent work and I appreciate the way they developed this one. 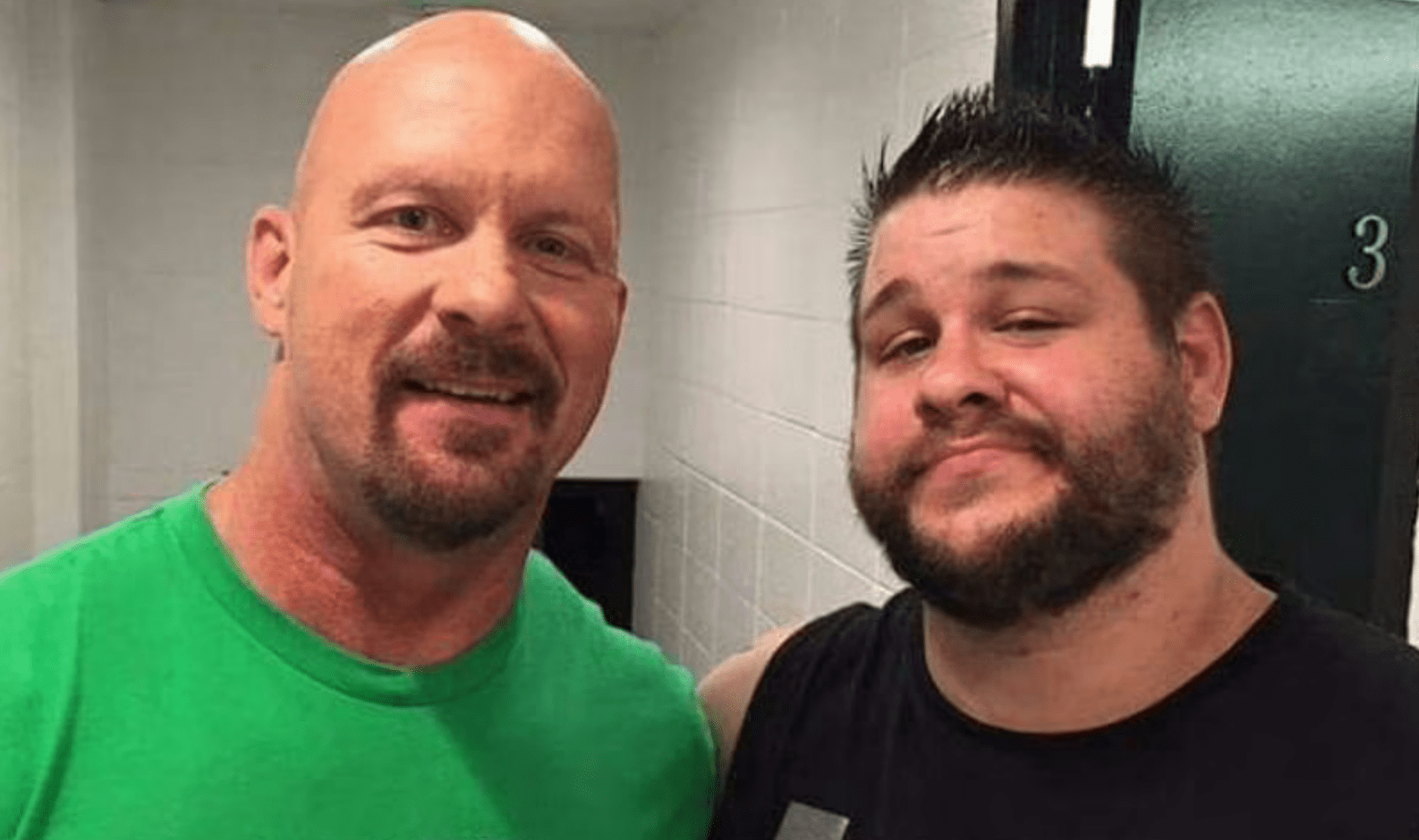 Next, Kevin Owens came out and put on a cheap heat concert. Austin came out to a loud roar, more cheap heat from KO, and we eventually got to match between the two where the old legend performed far better than he should considering the circumstances.

The match was a celebration of Steve for sure and it absolutely overdelivered. I'm not sure it was a good idea to have Austin go over, though.

Still...never say never in wrestling, people. Unless the worker is worm food, they might appear again at any moment for just one more match. Whenever a billionaire has the means to make it happen and it matches a need, that is.

On Sunday, I watched as HHH left his boots in the ring and admittedly I think we can actually make an exception here and keep his name in the retired for good section. Hunter was a good worker, but a shit dude. 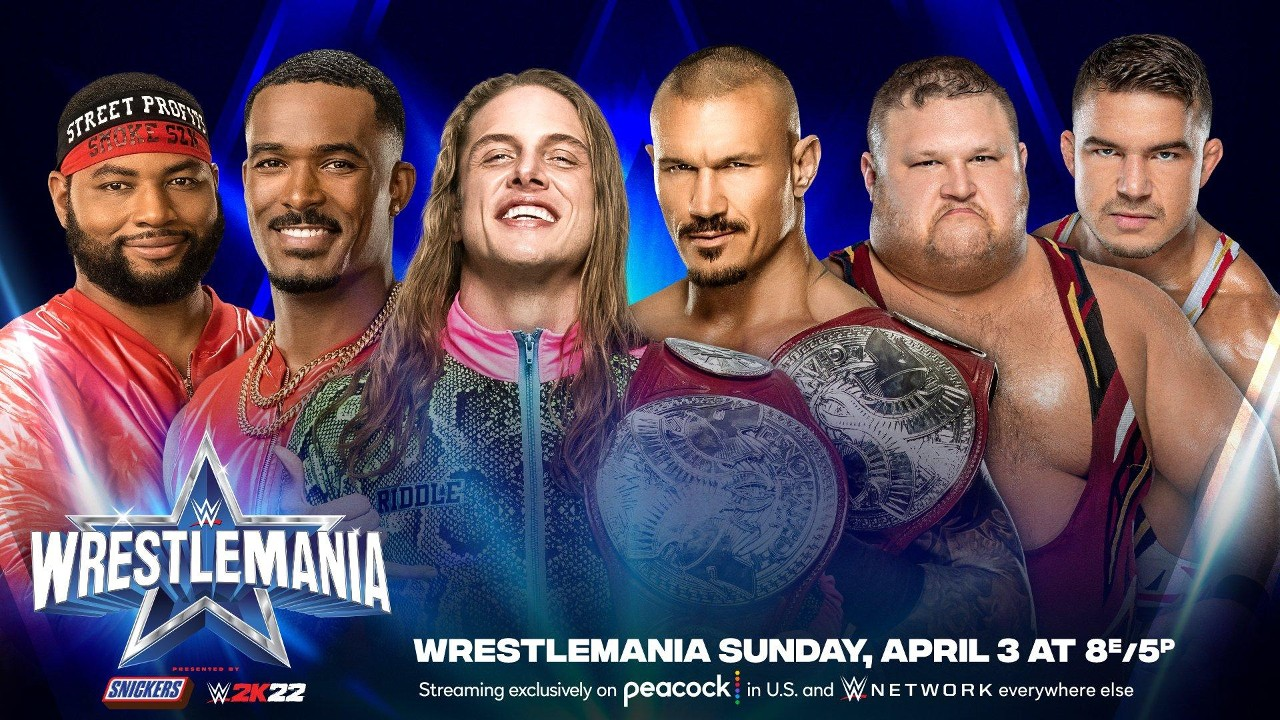 I next watched the Raw Tag Team Championship match, which was honestly just a pretty good sprint. It's not a Mania level outing, but a fine performance overall nonetheless. Simple stuff basically. For the next one, well I apparently slipped into a universe where WWE became DDT (which would be a great idea honestly). Sami was certainly the right guy for the spot, too. Note that the reason Sami and Kevin got the matches they got here was because of their new contracts. Consider it a gift from Vince.

Anyway, this was a gimmick match featuring an old stunt man that can't work and one of the most underrated wrestlers in the world. It should have sucked. It did not and, unlike Amber Heard, they did not shit the bed.

Fuck it, give that one a watch for the sheer spectacle of it. Great comedy action. If only the finish had been smoother.

Yes, Sami and Kevin were rewarded with big matches on the big show, but they also lost to a vet that hadn't worked in forever and was broken down and the stunt dude from Jackass. 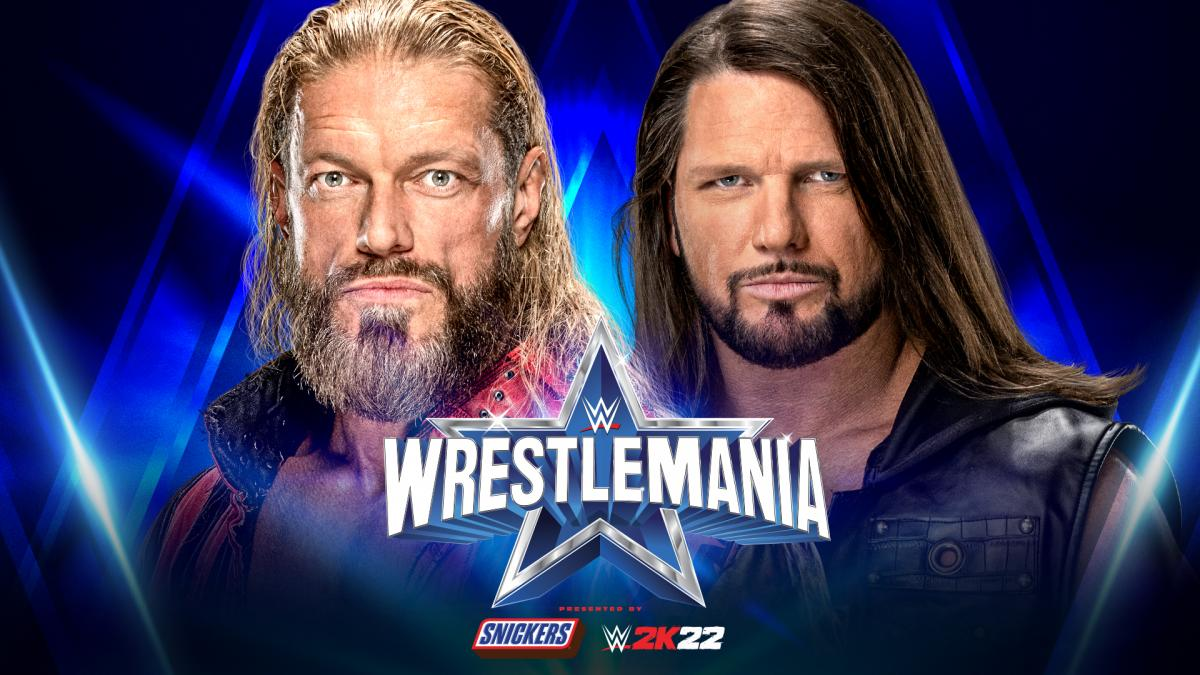 AJ Styles cut his face when he walked into the stage set, then proceeded to have a match against Edge that was given far too much time. Had they instead trimmed the fat and adjusted the pacing, the entire thing would have landed far better. Instead, it was just a bloated affair.

Just enough to be good, thanks largely to some decent midsection content, but the TV style finish and everything else I mentioned held it back from being special.

We close with Roman versus Brock. Basically, imagine a twelve-minute video game match where both of the wrestlers keep spamming big moves over and over again. Also, like a WWE game, it was clunky. This was beyond simple and didn't deliver on the tagline they had attached to it. It was circus act sports entertainment for sure.

Sometimes popcorn wrestling can be fun. This one just didn't land very well. It was fine I suppose, but that's about it. My son was at least happy with the outcome and I do agree that it was the right move.

Props to the WWE roster, because they put in for more worthwhile Mania matches here than I've seen from the company in a while. Fuck the production team, as always, though. The shows felt like Vince was trying to make a statement. I don't think they in any way won many new fans or anything, but they certainly pleased ones that are far too often shat on instead.

Props to the workers that stepped up during the weekend, too. Bailey was phenomenal, the FTR/Briscoes match was nearly perfect, and there was simply a lot of fun to be had in general. Make time for anything you missed from the list below (rated ***1/2+ with priority given to ****+ content).

Thanks for reading along and know that I'll be adding more content soon, as I tend to do.