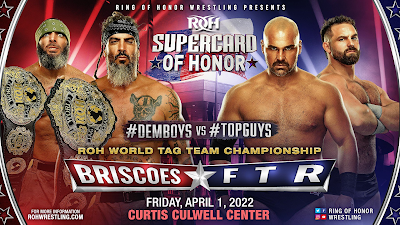 I was working through my Mania week pulls (post up soon) and I figured this show had enough relevance to it that I went ahead and just watched the whole damn thing. I do have a lot of love for the ROH legacy, after all. In the end I would say that I was largely rewarded with a strong show to kick off the new era, but also with an interesting event that opened itself up for a lot of question marks and criticisms levied in response.

Strickland and Alex opened the event with a fairly good spotfest. Nothing really to complain about and it's always nice to see Swerve in action.

Next, we had Cage winning a quick one over Ninja Mack. It was fine for what it was and I am thinking Brian might be a big player with the next era of ROH based off of how Khan held his contract up.

Next, Jay Lethal turned heel (finally) against Lee (and Sydal after). I think it paid off on the promise of quality that was made when they announced this, and I appreciate the in-ring work as much as I do the general storytelling attached.

Next, we had one of the weaker contests of the night. Considering the current champ was tied up with IMPACT obligations, we were given a interim title match instead. While Martinez remains a solid vet that is capable of putting in for decent content when matched up properly, Willow admittingly had never done much for me as a performer. I suppose that might be rather cold a statement, but it's an honest one and honesty is what I always aim for.

Next, our MOTN/MOTYC ran with FTR beating the Briscoes to take the Ring of Honor World Tag Team Championships. Expectations were high for a battle between these two teams, but they overdelivered and gave us a near-perfect masterpiece. I sincerely loved the way they built this one up the hard way, edging along and everbuilding until they hit the inevitable finish and I highly recommend any wrestling fan that missed it to run now and watch it.

After, Matt and Nick sent a message to the former champs.

I have no idea how we'll get that match, unless TK is somehow able to get the cancel culture dipshits to shut up and the network to not get scared.

Rhett is actually very much another Thatcher, as I've said a few times previously. Titus can be very, very good or he can have matches that lack all chemistry. Sadly, here we have the latter as he and Minoru Suzuki put in for a very average title defense.

Suzuki winning gold here is about the only thing worth even mentioning here.

Next, another disappointing matchup.

Woods had really grown but still is a bit green. Wheeler is talented but can be average when not lined up with the right folks.

These two were not right for each other, sadly. I appreciate them both, and have been very pro-YUTA in particular, but yeah...it was just super average and there's no escaping that.

It was around here that a lot of ROH fans on the officialy FB group started to get annoyed, seeing this show as more a message of AEW dominance than a event of respect for the legacy. I saw numerous posts and comments saying that Khan was jobbing out ROH workers for AEW's. I'm not saying I honestly agree with that, but I get why they feel that way regardless.

The show ended with Bandido falling to Jon Gresham and there being one, true champion once again. While I had expected something a bit better, I think they still worked a great one overall. What's next for Bandido is what I want to know most, though.

After, Lethal cemented his heel turn and Joe appeared to stand tall with the champ as the show came to a close, ending the event on a high note.

So, what does that all add up to?

While there were some outings that underdelivered or were simply average at best, there was far more good than bad. While I can see some of the complaints, I also think it worked well as a blend of respecting-the-legacy and Tony Khan logic. As a result, it was largely a strong first step into the new era and I am left wanting to see what the answer is behind those question marks.

If you skipped it, give this one a run and decide if you're along for the ride ahead or not.