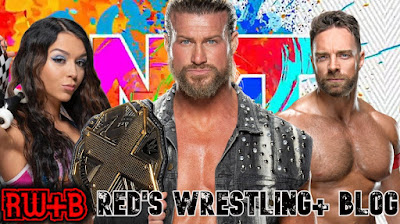 We started this one with Miz TV, serving ultimately as a way to set up the evening's main event.

The opener was a good television match that went just over 11.

A-Kid's NXT debut was fine for what it was, especially considering the time they were given. KUSHIDA is just the new Ohno for the brand.

Rey and Dominick had a moment with the Legado crew, setting up the semi. Dominick really should have been on NXT first and still should be, to be honest.

Sarray, one of the most talented women's workers in all of WWE that has been booked recently as a Japanese school girl because Vince is fucking weird, was squashed next by one of the greenest people in the company.

Ciampa cut a solid promo next, chatting about his run in NXT and his future. D'Angelo joins up, acts like a dick, all to set up a match between the two.

There was also a bit of cinematic style segments involving Cora and Toxic Attraction throughout the night, by the way.

Next up, Indi versus Pirotta. More story than anything and the story wasn't very good. It was at least short. It felt like it belonged on an old WB primetime show.

The semi was fine for what it was. Dominik really does need to be on NXT.

Imperium vs MSK vs the Creed Brothers is set up by the next segment. It was okay. The match could be pretty fun, at least.

Grimes chats next about how he keeps failing to push past the lower midcard.

The main event saw Knight and Dolph work a good TV championship throwaway contest. Both came off well for the circumstance, with LA in particular seeming rather motivated, and I appreciated the way it played out.

I enjoyed the way they set up and paid off the title defense. I enjoyed the opener well enough. I even thought the stuff with Cora was at least entertaining in a trashy b-soap kind of style. That said, I just need to accept that the new version of NXT isn't for me. Parts of it are fun. If I watch it in bits, I'll enjoy it well enough, the same way I do a lot of brands (like CMLL). Anything more than that is just a waste of time.