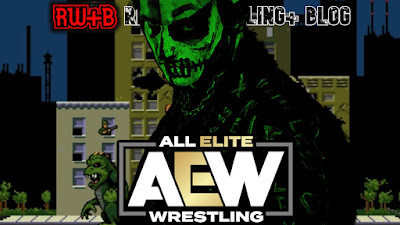 Rampage this week was, as usual, a breeze. It was also one of the weakest episodes thus far.

The opener was solid and saw Darby win via countout followed by AFO failing to run in thanks to Matt and Jeff to set up an atomico for Dynamite.

The women's match of the night was fine. Leyla is being used as an 80's style heel. Kris helped RV out here.

House of Black's match was really just a squash, though Fuego got to show off a touch. The unit looked awesome here. I've been wanting Buddy versus Omega asap and I am hopeful we are only months away from that.

The main was fine enough. Both worked well enough together and all and Max's charisma and bumping helped Lee. HERE is Max's rap, for those that are curious. Admittedly, Keith does seem to have lost a step since dealing with COVID. Shit happens. He's still a solid worker and is far too likeable to not be utilized in some form.

Strickland makes the save for Lee after, running off Team Taz.

THIS happened after the show.

Weaker episode than usual, with nothing really popping out as truly must-see. A safe skip to be honest.