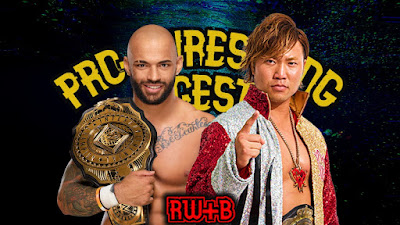 1-8. The Mexico National Heavyweight Championship tournament was fun, but an issue with these is always the amount of quick sprints. They all tend to be entertaining for what they are, but none often have enough time to solidify into something truly special. The finals were average at best and ended with Gran Guerrero nearly dying.

9. This was a very good singles match. Averno has been fun in his return to the "serious and the stable" and he got Volador to step out of autopilot here in Puebla. Worth considering.

10. Nick Wayne was a bullet speed machine here, working a heart attack pace and coming off as a dude far more experienced than he actually is. AEW signed this dude to a future contract. He's 16. He's also the next Ospreay, hopefully without the bullshit. Strickland, of course, was excellent in his role, too. Fantastic stuff that overdelivered.

Next up, some New Japan Cup action with a handful of pulls.

11. The HW/JR tradition continues and El Desperado stepped up big against Okada. There was a spot at the end that felt a bit iffy, but in all it was a fantastic clash.

12. A Dragon and a Stone Pitbull walk into a ring. Excellence follows. This has been true in their past meetings and remains true once more with this MOTYC level encounter. Run to see this one.

13. Phantasmo can be a very consistently enjoyable worker. Ospreay is one of the world's best. Will can basically autopilot his way to a four star match and essentially did here. Fantastic stuff with a nice pace and some badass action.

14. This one is from STRONG and saw Strickland answer Jay's ongoing challenge series. White truly is so fucking good right now and Shane, in his return to the walls outside of WWE, was motivated. They had a great match and both came off looking great as well.

15. The New Japan Stock Exchange. They battled for about 20 minutes, much of it trading chops. Good drama and even though the finish felt a bit off, it was a great outcome. Fantastic shit.

16. CIMA in New Japan is such a fun sight to see. The dude is a legit legend. Goto also is a dude that steps up all of the time and rarely gets credit. Their singles, tournament match was borderline great stuff and I wouldn't mind a rematch.

17. OGODa and Taichi was great stuff. The latter, like Goto, can truly be quality in the right circumstances and was here in the big match moment. The champ moved on. This tournament has been rather fun, but I feel NJPW is in a weird place of stagnation right now. The diehards have stuck around, but no new fans have started watching.

Ice Ribbon time. Note that they have a new weekly series on their YT channel that serves as an English style digest. They have something big coming soon, too.

18. Great, 15-minute time limit draw with a nice pace. They sold this one well and came off well in doing so.

19. This one was a fantastic title match that I fear will be ignored by a large portion of fans, simply because of the ring in which it took place. I truly hope the English series and the big news helps more fans pay attention to this roster.

20. This was a very good trios match. Arisa is, of course, one of the best joshi performers in the world and Fujimoto rocked here. Borderline great stuff.

To NOAH. Note, I dropped the first Emerald TV CHOPS episode on my TikTok. It's a companion piece to my upcoming Emerald TV series. CHOPS is basically quickshot videos. This one is of match #22.

21. Go finally gets his first singles match victory since December of 2020. His run, since returning late last year, has been top shelf shit. Shiozaki was his normal, excellent, ace quality self. Soya was the big meat mountain he is. Fantastic stuff.

22. Borderline great junior action. Eita's NOAH run as part of the Japanese Perros unit has been entertaining. This is his first singles belt reign since his solid Dream Gate run in 2020. Both worked hard and came off looking good, but Eita was the right one to win here.

I watched the MSG thing HERE. Good shit, but it's funny how it got built up before hand.

I watched Big E's neck get broken off of a spot that was poorly executed. I'm rooting for a speedy recovery for the big man. Dunne debuted alongside Sheamus and the greenhorn under an awful name.

23. Very good title match. Ricochet is finally getting to actually do something and Sami is being allowed to work, too. Always a good thing.

24. This main event was pretty damn fun. KO and Rollins are great workers and they worked hard for this TV match. Great entertainment and a decent Mania builder.