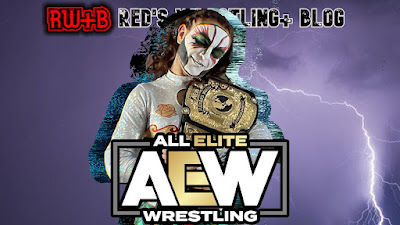 This one opened with a very good six-man match, keeping the Cole/Page angle moving while also possibly setting reDRagon up for a shot at the tag champs. The finish made for a solid image.

The second match was an extended squash, though I give them credit for spotlighting Yuta in doing so. The new duo of Mox and Bryan rolled on and Wheeler had a nice spot in post with Regal, too.

I hope we get a big, badass Catchpoint/Foundation style unit asap.

The Jericho Appreciation Society segment was interesting. They came out to a sing along and some cheers because it's Jericho. They're calling themselves "sports entertainers" which helped get some boos, though. I'm not big on stuff like this and this in particular felt a bit tacky, but I always say that AEW is a variety show. I'm sure some loved the angle. I do dig the new unit.

Deeb/Shida is promoted. It's been two weeks since Hikaru returned. The rematch between the two isn't happening next week either.

Next up, the TNT Championship match. I had heard, plus common sense solidified, that Wardlow would drop this due to interference. That was fine given the circumstances that they put themselves in. What I didn't care for much at all was this match, though. Sky just won and didn't come off very good here, despite being a far better worker than he usually gets to show. I was hopeful he'd have a badass run right now, but it's off to an iffy start. Wardlow didn't get any favors either, even with the protected finish.

He'll work against MJF next and run a gauntlet.

Jade wonders who's next.

Jeff and Matt Hardy's match was very house show style Hardy Boyz content and a bit rough around the edges, but fun nonetheless. I mean, listen, I was one of those kids that absolutely loved Jeff Hardy. The dude has a lot of demons and I am admittedly still disgusted by him drinking and then driving, but I am a fan that roots for the dude and wants him to be in a better place. I think AEW could be that for him. So yeah, this was a super basic match but I am sure a lot of people will enjoy it for what it was regardless.

AFO tried to run down after, were ran off by Darby and Sting siding with Matt and Jeff instead.

Listen, last year's match was the shit. They're also both fantastic workers. That said, the build for this has been below expectations and their Revolution match was super disappointing. But, this is the payoff. TR is in front of her home crowd fans. It's in a cage. Baker is alone. Surely it'd rock, right?

Yeah, it was admittedly a bit rough around the edges and they failed to deliver the same quality of last year's war, but this was indeed great stuff and it was pretty sweet seeing Rosa hold the strap.

Baker had a good run. She bested Rose, Velvet, Kris, Soho, Conti, Riho, and Rosa (at Revolution) along the way, cut some nice promos, and made herself one of the biggest names in women's wrestling in the past decade along the way. I'm not sure what's next for her for sure, but I'm sure it wont be the same treatment Nyla, Riho, and Shida got after their reigns.

This episode had sparks, like usual with even the weaker of Dynamite installments. It still had to chug along at times, though. I felt the midsection could have been done far better, for example. Still, it was overall a good 2 hour edition. I wonder if Khan is stretched a bit thin and that's why some of the booking calls have felt like they've taken a slight dip. With him now owning Ring of Honor, and claiming that he'll handle that, too, I am worried.

Remember when The Simpsons dipped in quality because the writers were putting their creative energy into making Futurama a gold standard show? Maybe I am remembering how that played out incorrectly, but I think you'll get the point I am trying to make...