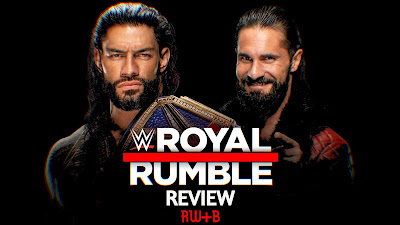 My kiddos were interested so I pulled the trigger. They largely enjoyed it, but I admittedly didn't find much to applaud as a complete package outside of the entertainment value it provided to the kiddos. If not for the sponsorships, this company really would be fair to compare to late-WCW.

Let's just dig in to the breakdown.

The opener was legit fantastic and featured high quality storytelling and drama and some rather solid action, too. Reigns' run continues in an interesting manner and I'm actually interested in seeing how they continue to play it out, unlike basically anything else this company is running.

The women's Rumble was good. I don't tend to care much for the gimmick and if I cared more for the product the outcome would've bugged me, but for what it was I liked it well enough. Seeing James and Lita was fun for nostalgia reasons and the gear Vega and Banks wore were awesome, by the way.

In the three spot, we had an okay title match. Viper is a good worker and did alright here. Becky has admittedly seemed less since her return than she was before. Still, it didn't flow as well as it could, and should, have.

Next, we had an interesting one for sure. If they had played this straight, it would have been pretty good. Instead, it was a story building block, but a decent one if nothing else. They treated both pretty well in the opening section and I appreciate the drama of the Hurt Lock spot. The ref bump and shit finish of course hurt the quality of the match itself, but it was fine for the circumstance. I'm especially cool with this because I think Lashley is a better choice for champ here and it largely fixed the mistake that was made at Day 1. I also am fine with Brock and Roman taking place at Mania so that's cool, too.

The semi was okay. They tried to play Miz and Edge like MJF and Punk, WWE style. It's been okay but far below that one's level. Played for nostalgia, for those that want more Phoenix, this will perhaps be more enjoyable?

Last up, the men's Rumble. It was...yeah, not very good. The pacing was a mess, much of the names involved felt more filler than usual, especially when you look at who the left out, and it just was a thing that largely existed for an hour until Brock ended it. We also had Shane playing his nepotism shit again. Meh.

I am cool with the enveloped angle here, with Roman's mental state pushing him to a DQ finish in the opener, the way he screwed Brock in the mid, and the way Lesnar walked out the winner to set up the next chapter. The opener was worthwhile and the women's Rumble was good. The rest was super missable stuff that felt like a chore to get through, even though I watched it in two parts.

Save yourself time and just watch the opener and skip the rest.