Open the Dungeon Gate #5: A Shadow and the Dark Gem Dungeon (Xarv'inX) 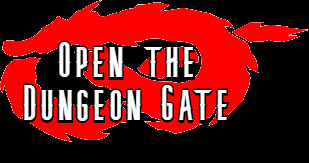 Nerida fled the waterfall cave and returned to the walled city to see if she could assist.

Ski and Nemeia decided to try to head to a nearby, small village that the guard remembered very little, but hopefully enough, about. The idea of visiting Aidespir for assistance was risky considering the torn flag previously. She knew the destination considered themselves independent and that it was to the south east.

On the way through the woods, they ran into a large spider that chased them to the edge of the tree line but stopped as soon as they passed it for the spiders were cursed to remain in the forest without any exceptions.

After their escape, they soon found a watch tower and the village. Everyone was rather elderly and seemed to be concerned, but were occupied with issues of their own in the form of "an orc that had been bullying them" that was hiding out in the old Merric Manor.

When they investigated the labyrinth style home, they eventually found a Shadow which attacked and nearly took out the party. They managed to best it.

Ea and Ski leave the forsaken house of the shadow beast but are instantly struck down with a set of blows to the back of their heads. When they awaken, they are in a dank jail cell.

Joining them is another, a human who introduces himself as Kirsun'Dune. He claims to be an explorer but doesn't remember what happened or how he got there, but has a bump on his head, too. They hatch a scheme, pretending Ski is hurt, the human checking on her, and Ea shouting out for help.

A kobold attempts to check on them, but is pulled hard against the cell door as Kirsun'Dune grabs the keys. They escape the cell and are attacked by another guard, but fall it easily.

Dark stonework corridors, painted very loosely with light from holes above, make up a majority of the dungeon.

They find scratches of resistance headed toward the cells, kobold "art", which can barely be called that considering kobolds use their own shit for paint, and dried blood along the way. Perhaps the most disgusting sight is when they enter one door and see a giant rat that has entered via hole and is eating one of the guards.

After killing the furry beast, the dying kobold tells them the location of their weapons and gear and mentions something of a "bastard wizard" before it dies.

They discover sleeping areas, a bit of gold and crappy kobold gear, a disgusting dinning room that appears to double as a bathroom, and a grand library that runs three massive rooms deep.

They also found a room with doors of wood with no keyhole, knob, or other way to enter. On the wall near, the words, in elvish, "face thyself, the key within". The human bashed it in but once they entered, the door returned and the entire room went pitch black. A mirror on one wall showed their reflections, but "different". Ski tried to escape, falling through a door on the other side, in horror. The door returned behind her and then she felt something burning in her pocket. It was a key.

She threw it down after burning her hand. Smoke began to appear as it burned the stone floor.

She broke back in to find Kirsun'Dune and Ea battling mirror images of themselves. Ea was soon knocked out, while the human fighter managed to remove an arm of his doppelganger.

Ski and the fighter defeated "themselves", Ea's, and then helped their hurt ally to her feet. Ea put her arm around Kirsun'Dune and was helped through the rest of the dungeon.

Eventually they stumble upon a map of the dungeon and then find two kobolds beating on an old man.

Kirsun'Dune, having been loud and brash throughout, managed to save the old man with the help of Ski.

The old man recognized Ski and Ea, and begged for forgiveness. He said a dark wizard had taken over the town. That he was actually 23 but was aging quickly, like the rest of the town. He said the dark magic was keeping them alive, that they would be killed instantly if they challenged the wizard, and that the magic also was aging them, before passing out.

A dark, foggy corridor ahead with bodies of other villagers laid ahead and then a door with the same symbol that was on the key they had found earlier after the mirror incident.

Eventually they found a stone door that was impossible to enter and a stairway down.

Down they went, finding a room with two everburning torches burning green. A few small holes around the room saw green bits of energy flow through randomly and feed into a black glowing orb in the middle of the room. Green, stable energy surrounded the orb and it floated above a stone alter in a language Ea recognized.

Ea was terrified and tried to warn them that they needed to leave but Kirsun'Dune sliced the sphere with his blade, cracking it. The energy became unstable and the orb began to shake.

Ea scream for the group to run. Ski listened and they ran back up while the human stayed behind, in awe.

At the top, they saw the door now open that couldn't open before, a portal on the other side and someone beginning to step out. They kept on back the way they came instead, eventually seeing a bright green light and hearing a loud sound behind them.

Ski and Ea found a set of stairs up on the map and headed up to end the session.